The Nutters Being Nutters and Also Being Criminals

There is an update to the Joy Braunstein story - a third person has been charged with harassment: HEATHER LYNNE VALLONE.  And Braunstein offered more details about her purchase of a collie puppy from a reputable breeder.  She said the puppy was for one of her children who has special needs and that she carefully researched her choice of both breed and breeder to get an appropriate pet for her child as each and every responsible parent ought to do.  Eric Heyl, the columnist who wrote the update, observed that judging from the harassment she received, you would have thought she had drowned a puppy, not responsibly bought one. 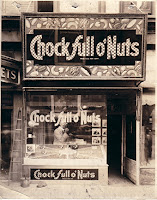 First, some happy news:
Cindy Marabito was fired from her examiner post for lying.  Well, not technically for lying because she’s been doing that for years, but for being an idiot after she got caught lying.  At one point, Marabito was making quite a pretty penny from her Examiner articles.  Another nutter is the one who nailed her, too.   Her entire oeuvre has been removed from the Examiner site.  Her defense is that no one should criticize her for lying because she’s saving animals.  Fun read!

Click here and here to read about another enormous Marabito lie that she didn’t get fired for:

And now for some mixed news:
Western Pensylvania Humane Society hired a new director, Joy Braunstein, who had implemented more stringent screening protocols as a public safety measure and more dogs were being euthanized because of it.  That made about a third of the staff stomp off in a huff or get fired.  Then Braunstein bought a collie puppy from a reputable breeder (she had several rescue dogs and horses at her home).  This made nutters lose their shit.  They started a change.org petition to get her fired.  Braunstein received a boatload of terrifying threats from the nutters.  WPHS put her on administrative leave for her safety.  Then Braunstein decided to resign from the position because of fears for the safety of her family.

Police charged two nutters with harrassment.  Both Diane Bandy and Tara Vybiral have been called out for nuttiness before.

Fyi the Michael A. Fuoco mentioned in the Bandy article is married to super nutter Linda Wilson Fuoco who was pals with Leah Purcell of Spindletop Refuge.

And then there’s news of nutters behaving badly in Illinois.