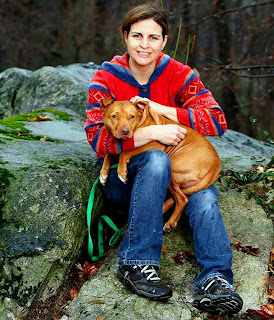 Jasmine wound up in the hands of Catalina Stirling, a 35-year-old artist who lives with her husband, Davor Mrkoci, 32, an electrical engineer; her children, Nino (4 1/2) and Anais (2 1/2); Rogue, a spunky spaniel-lab mix; Desmond, a three-legged foster basenji-lab mix; and Thaiz, the family cat. The fenced yard is big enough for running, and the living-dining area, which contains almost no furniture, has a smattering of dog beds and water bowls. Catalina and her children have painted angels on one wall.

In her evaluation Jasmine was considered for sanctuary with Best Friends, but when volunteers from the Baltimore rescue group Recycled Love went to see the pit bulls at the Washington (D. C.) Animal Rescue League, a volunteer was so moved by the sight of Jasmine hiding under the blanket that she crawled into the cage and began massaging and whispering to the dog. Jasmine seemed to respond. So Huss sent Jasmine and Sweet Pea to Recycled Love, which subsequently turned Jasmine over to the woman who had crawled into the cage: Catalina Stirling.

Despite a promising start, Jasmine had a long way to go. For months she sat in her little cage in Stirling's house and refused to come out. "I had to pick her up and carry her outside so she could go to the bathroom," Stirling says. "She wouldn't even stand up until I had walked away. There's a little hole in the yard, and once she was done, she would go lie in the hole." It was three or four months before Jasmine would exit the cage on her own, and then only to go out, relieve herself and lie in the hole. Sweet Pea, who's better adjusted but still battles her own demons, was an hour away, and her visits helped draw out Jasmine. After six months Stirling could finally take both dogs for a walk in a big park near her house.

apparently catalina succeeded in bringing jasmine out of the hole in the yard and out of her shell and into the street.

Jasmine has come far, but she still has many fears. Around people she almost always walks with her head and tail down. She won't let anyone approach her from behind, and she spends most of the day in her pen, sitting quietly, the open door yawning before her. Stirling works with her endlessly. "I feel like what I do for her is so little compared with what she does for me," she says, welling up.

i wonder what jasmine's response was when someone did approach her from behind?

In the end, 47 of the 51 Vick dogs were saved. (Two died while in the shelters; one was destroyed because it was too violent; and another was euthanized for medical reasons.) Twentytwo dogs went to Best Friends, where McMillan and his staff chart their emotional state daily; almost all show steady improvement in categories such as calmness, sociability and happiness. McMillan believes 17 of the dogs will eventually be adopted, and applicants are being screened for the first of those. The other 25 have been spread around the country; the biggest group, 10, went to California with BAD RAP. Fourteen of the 25 have been placed in permanent homes, and the rest are in foster care.

and now one has died after being hit by a car. i hope catalina wasn't injured, becuase we all know that a "responsible" pit bull owner would absolutely never ever under any circumstances let their dog off leash.

Still, it's Jasmine, lying in her kennel, who embodies the question at the heart of the Vick dogs' story. Was it worth the time and effort to save these 47 dogs when millions languish in shelters? Charmers such as Zippy and Leo and Jonny Justice seem to provide the obvious answer, but even for these dogs any incidence of aggression, provoked or not, will play only one way in the headlines. It's a lifelong sentence to a very short leash. PETA's position is unchanged. "Some [of the dogs] will end up with something resembling a normal life," Shannon says, "but the chances are very slim, and it's not a good risk to take."

does the "normal life" of a dog typically end under the wheels of a car?

Then there are dogs like Lucas, who will never leave sanctuary because of his history as a fighter, and Jasmine and Sweet Pea, who will never leave their Recycled Love families. "There was a lot of discussion about whether to save all of the sanctuary cases," says Reynolds, "but in the end [Best Friends] decided that's what they are there for. There are no regrets."

i wonder if catalina has any regrets?

BAD RAP works out of Oakland Animal Services, where above the main entrance is inscribed a Gandhi quote that dog people cite often: the greatness of a nation and its moral progress can be judged by the way its animals are treated.

"Vick showed the worst of us, our bloodlust, but this rescue showed the best," Reynolds says. "I don't think any of us thought it was possible to save these dogs -- the government, the rescuers, the regular people -- but we surprised ourselves."

and catalina showed us the worst of our stupidity and selfishness.

Jasmine doesn't know about any of that as she sits on the back deck of Stirling's house. Stirling kneels next to her, gently stroking the dog's back. "I used to think any dog could be rehabbed if you gave it food, exercise and love," she says, "but I know now it's not totally true. Jasmine's happy, but she'll never be like other dogs."

It's quiet for a moment, and the breeze blows a shower of brown and red leaves off the trees. Then Jasmine turns, looks up, and licks Catalina's face. It is the sweetest of kisses.

A child's mind in a woman's body

First off, whatever happened to the story about one Vick dog in the hands of BadRap being hit by a car? I believe this happened (or was rumored to have happened) not long after BadRap received their Vick dogs.

Secondly, one Vick dog actually was killed by a car in 2008. The animal came out the "Brandon Bond" rescue...Lucky 7 hopped its fence and got unlucky. This was after the dog had undergone "vigorous" rehabilitation?
--
http://www.dogsbite.org/blog/2009/08/another-vick-dog-dies-former-sports.html
--
http://atlantapitbullrescue.com/index.php?sub=press_release

What proof do we have this really was Vicks pit bull? Maybe it was a lab from the shelter that she threw under a car so she could give the pit bull back to him.

I'd like to see a follow up on the other Vick dogs...The Nine lucky Beagles who were spared being used for Baiting...Notice how the Beagle community just took them in without a clockwork orange like PR assualt?

Too bad that car didn't try one of Marji's less lethal tactics.

I read the article and it was disgusting. In the process of writing CNN to complain. Wonder if they would allow an article on the opposite end of this issue?

Allegedly, Jasmine jumped a 6 ft fence to break containment. If a professional person can't contain a pit, who can?!

The nutters are all verclempt over the death of this "celebrity pit"...They never bat an eye when a neighbor pet is predictably killed by a pit though.

Each of these dogs came with $19K in dowry money(which Vick illegally liquidated from his MV-7 employees retirement accounts)...You would think she could have built a suitable enclosure with it.

“He is your friend, your partner, your defender, your dog. You are his life, his love, his leader. He will be yours, faithful and true, to the last beat of his heart. You owe it to him to be worthy of such devotion.”
Unknown

Looks like Catalina was not worthy of such devotion.

As a parent of two children, I wonder how the children of these women can possibly lead normal lives. A previous poster made the astute observation..."a childs mind in a woman's body." I believe that is most accurate. I wonder if her two children have friends or classmates that come over to the house to play? Does the mother reveal that she is busy "rehabbing" ex-fighting pit bulls to neighbors, friends, and classmates? I know of no responsible parents who would let a child play in a home where this was going on. Do her children face lives of social isolation because of mom's obsession? Or does mom lie about what she is doing?

You people are ignorant, uninformed and cruel. Not one of you know the truth about what happened, the circumstances that surrounded the accident, nor do you know Catalina or her children. May your circumstances and character be judged in such a harsh and cruel way, based on rumor and ignorant assumptions. The presence of people like you diminishes the beauty in this world every day.