Grippers in History - 19th Century Views on the Bulldog

Inspired by Craven's post answering the question, Are American bulldogs pit bulls?, I pulled together descriptions from 19th century books of the iconic gripper and the granddaddy of all the gripping dogs we have to deal with today - the bull baiting bulldog from Britain. 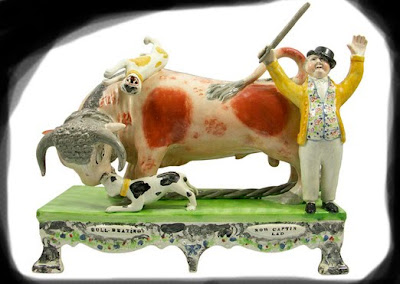 SPOILER ALERT: 171 years ago those knowledgeable about dogs felt exactly the same about grippers as we do today and made the same exact observations and arguments: condemnation of owners as the despicable dregs of humanity; the genetic monster dog; genetically determined violence; grippers are different from all other dogs; grippers attack unprovoked; grippers attack their own masters...and there is a lot more, so much more that it is very hard to list it all. So please, when you come across something from these 19th century texts that sounds like it came right out of the maul talk manual, point it out!

A must-read is the very first description of the wiggle butt.

And look for the spiritual ancestor of Craven Desires. Before the frankenmauler, there was the "idiot dog!"

All of the titles are links to the original texts copied here. The old texts are images and you can click on them to enlarge them.

Very strange and amusing comment about the image used. Tell me what it means! 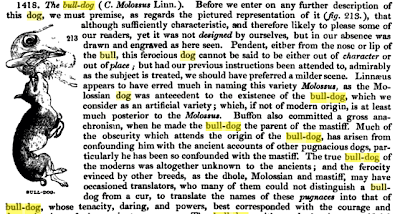 Hamilton-Smith describes the bulldog as being similar to the mastiff and "the Cuba (mastiff) but with the peculiar features of the bull form more strongly marked; 'the distorted blear eyes, cheeks and lips sordid and hanging loose, looking like monsters, and the more repulsive in aspect the better in qualities."

'The Bull-dog is possessed of less sagacity and less attachment than any of the hound tribe; he is therefore less favored, and more rarely bred with care, excepting by professed amateurs of sports and feelings little creditable to humanity."

He describes locking jaws as a spasm. He is not talking about a lock in the bony structure of the jaw, he is talking about the muscles of the jaw being able to lock onto its victim and not let go. And he mentions that bulldogs are different than any other dog. 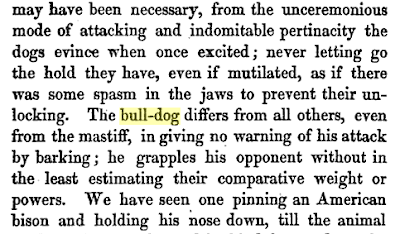 The sportsman's Cyclopaedia by T.B Johnson, 1848

Johnson describes the bulldog's temperament as being the opposite of all other dogs . He illustrates this by describing a bulldog attacking his owner.

He says they are useless as guard dogs because they are lazy, not protective of the family, and might let the intruders murder the entire family. But that when they do attack, they do not bark or give warning or alert.

He ends the description of the bulldog by hoping they will become extinct because they serve no useful purpose and are dangerous. A History of the Earth and Animated Nature by Oliver Goldsmith, 1859

Goldsmith again describes the incredible ferociousness of bulldogs, and notes they are unlike other dogs, He observes that they are stupid and useless for anything but violence. He disparages those who own and breed these dogs as uneducated, savage barbarians. 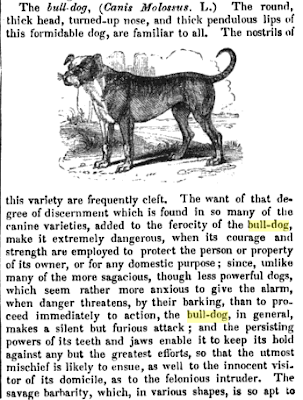 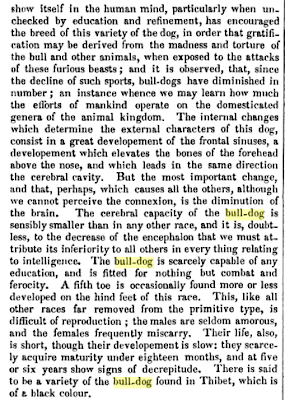 The bulldog is described as being "distinguished almost solely for its undiscriminating ferocity." 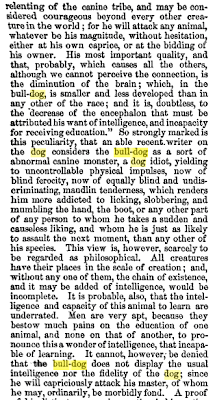 To quote Craven from the Bloodhound blog: "Training and environment does not follow the bulldog through history, genetics does." 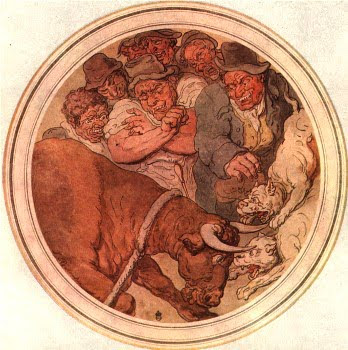 Impressive research, thank you! The "grippers" have not changed a bit in the last 150 years or so.

This is helpful information against the propaganda of the pit bull lobby, who claim that the pit bull had formerly been a lovable "nanny dog" in England, and only in recent decades come to be regarded as dangerous, due either to "bad owners" or a media conspiracy, depending on who you talk to.

"Shaped by dog-fight enthusiasts, they are "a perversion of everything normal dogs should do. What they've created is a canine psychopath."

this is a great companion piece to the other bulldog blog. i will bump them both up to the top tomorrow.
great research snack sized dog.

This is WONDERFUL. All the pitiots who like to scream, "Do the research!" need to be directed to this with a side of STFU.

If you kill of the Pit Bull type dogs then criminals, who only want Pit Bulls for their intimidating appearance, will get another breed and mess it up. Spay and neuter Pit Bull types that show unprovoked aggression but only allow the ones who show desirable temperaments to breed. By desirable temperaments I mean dogs that don’t growl at everything and would only attack if someone was trying to kill or rape their owners. Now I am not ashamed to say this but I love Pit Bulls. I love them along with Dobermans, Rottweilers, German Shepards, Mastiff type dogs, Dogo Argentines, Great Danes, Persa Canarios, Alaskan Malamutes, Husky type dogs and Can Carsos. All of these dogs are considered vicious and savages breeds not worth living. What people fail to notice is that the more “popular and friendly” dog breeds are becoming more aggressive. Of course while irresponsible owners continue to abuse Pit Bulls the fear is directed towards Pit Bulls. I don’t care how many people give me the stink eye just remember al the other dog breeds that have killed people.

Now I don't agree with adopting or rescuing dogs that have attacked people or animals unprovoked. That is risky anyway no matter what breed. Now while you are complaining like a bunch bratty children about Pit bulls why not talk about the Golden Retriever that killed it's owner for no reason. But I’m sure you going to say the dog didn’t mean it but if it was a Pit Bull you’d be ready to form a lynch mob.

Nonsense. The sociopaths who keep pit bulls didn't create them, and they can't turn GSDs Labs or Beagles into killer dogs.

The pit bull breeds have been around for 170 years. Are bully breeds the only dangerous dogs? No but they are the largest part of the problem.

The 18 year study done by the animal people shows for instance that a pit bull is about 100 times more likely than a german shepherd to kill a family member or a neighbor.

When you trot out obscure stories about the odd attack by other breeds, two things are evident. #1, you don't ever give those other breeds the benefit of the doubt, while bending over backwards to excuse the pit bull who attacks his owner, and #2, you fail to see the big picture: for each of your obscure examples, I can show hundreds of examples of pit bull attacks.

Another area where you are fooling yourself is assuming that all dog bites are equal. Nope, not even close. Most dogs nip and retreat. A pit bull hangs on and rips into flesh. You don't seem to understand the difference between a bite and a mauling.

As for breed specific laws, I agree, we should include not only pit bull type dogs but also presa canario, dogo argentino, and similar creatures.

according to lycanprincess's google profile, she is a horse lovin/dog lovin teenager who will start blogging when she gets her very own pit bull so she can keep everyone apprised of its "progress".
i suspect that she also suffers from bipolar or ADHD. she doesn't actually READ the blogs, she has been spamming the comments by cutting and pasting the same long winded tirade about a dozen other breed attacks on humans that occurred over the last several years as some kind of PROOF that all dogs attack other ANIMALS i guess. i don't think she has the intellect or maturity to carry on a meaningful debate. she only has the berkey talking points memorized or copied in her clip board. i sent her an email. i suspect that i will get a reply when someone can interpret it for her.

For a precise definition of "Idiot Dog" please see
http://cravendesires.blogspot.com/2011/02/gamebred-horses-fuck-yeah.html

This is so right, Bagheera! Craven's post on the horse v. attacking gripper is the PERFECT illustration for the term "idiot dog."