a new board game 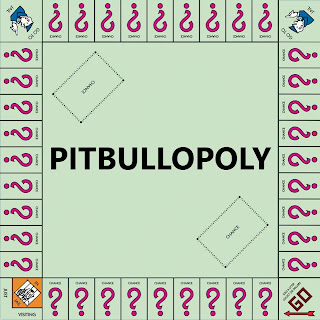 if you are on facebook, check out Ban Pit Bulls Across America
Posted by scurrilous amateur blogger at 8/02/2013

I'm thinking this game should have risk squares where you lose certain things, like fingers. But if you know the pit bull then your risk is less steady. If you are the owner, it is more like a card is dealt out of nowhere that gives catastrophic mauling.

Really, we have an advantage over nutters in one sense, in terms of safety. We see a pit bull and we know "this shit might be on". Those dingbats though have safety cards only to be unpredictably mauled.

So, depending on the final form of the game, I think the pit nutters have a disadvantage to us, but the biggest disadvantage is to those that don't even know the game is being played.

What's interesting is that risk taking and even social exchange can be modeled with a game of this set. Us and nutters would never agree upon the number of sides of the die that would result in a poodle being murdered. They would want to have to rule snake eyes 20 times for that supposedly low probability even to occur.

We'd never agree on the game. It would be interesting though if they took the concept of the game and the applied to their pathology. My bet is that we could still figure out their bullshit and beat them every time within the confines of their little abstraction.

OK this Cesar guy, tried to domesticate you
But you're a fighting dog, baby, it's in your nature
Just let me liberate you
Hey, hey, hey
You don't need ped papers
Hey, hey, hey
‘Cause God is not your maker

What do they make chains for?
When pit dogs say “game on”
What do we need crates for?
You the gamest bitch in this place!
I feel so lucky
Hey, hey, hey
You wanna thrill me
Hey, hey, hey
What rhymes with thrill me?
Hey, hey, hey

i had to google "blurred lines", good job packhorse.

Bitchen tune, Packhorse!
It's a little hard to dance to, but it
sure makes me wanna run, run, run!

I know you all are too young to remember American Bandstand

But, seriously, excellent work, it creates a lot of almost suffocating tension, and the cadences are driving and point-on...are you a musician, any chance?

everytime sadfalada leaves a comment on an old blog post, i just want to republish the blog so it's sits at the top and draw attention to it.

No, not a musician at all--just a person who spends a lot of time listening to the radio on the way to work. I've found that I can change a few words here and there and make the song about a totally different subject. The song above is a currently popular tune called "Blurred Lines," (don't know the artist, sorry.)

Thank you for your awesome poetry! It truly adds some art and finesse to a grim subject.

So I wonder what the game pieces would be

In the board game called Pittopoly:

A Cocker Spaniel, since they are in fact meaner,
A Chihuahua and a mouth foaming Weiner,
A baby, a mail man, and a silvered break stick,
And a severed finger cut off at the quick.
Petey the pit bull, and of course, Buster Brown,
and Cesar Milan, and Shorty, the clown.
Good luck to you all, with the roll of the dice.
Please remember, pit bulls don't always play nice.

my vote is for marabito's muzzled pie hole

Pit people, they know bout
the dangers of ladders
Cause they seen them,
they sees what they can do
and those that step where it says
THIS IS NOT A STEP
are ignoring a real big safety clue
and down they may go, six feet, eight feet, twenty-five feet or eighty two
And each rung, though they look nice and smoothed
when improperly used, act like they are toothed
A little known fact, but science offers us proofs
That ladders kill the unwary
the fools, and the goofs.

lol. i doubt cindy marabito could grasp your poem on a very good day.

You all are all idiots