The Genius of George Carlin: soft language and shading the truth

"Americans have trouble dealing with reality and in order to shield themselves from it, they use soft language and somehow it gets worse with every generation. These poor suckers have been bullshitted by the system into believing that if you change the name of the condition, somehow you will change the condition." George Carlin

propaganda and the transmogrification of pit bulldogs

advertising has changed through the years, thanks in large part to EDWARD BERNAYS, the master at manipulating people. after WW1, BERNAYS took propaganda to new heights and turned it into public relations, the art and science of influencing people to consume based on primitive emotions rather than reason.

war, physical conditions and consumer products have all followed a similar path and the evolution of the pit dog is no different. pit bull advocates have been utilizing the magic of slick public relations gurus to try and improve their gripping dog's image. the ultimate canine gladiator has had many aliases over the years, some failed out right, some stuck. but even the most clever ad campaigns and name changes can't mask the gripping dog's savage history, try as the nutter might: fighting dog, pit dog, pit bulldog, bulldog, pit bull terrier, bull and terrier, half and half, bull terrier, american pit bull terrier, american staffordshire terrier, yankee terrier, new yorkie, st francis terrier, pittie, pibble, wiggle butt, working dogs, farm dogs, just dogs, america's dog* and of course the nanny dog.
the most popular moniker today seems to be lab mix. and this one appears to not only be sticking but it is casting quite a shadow on the truth. 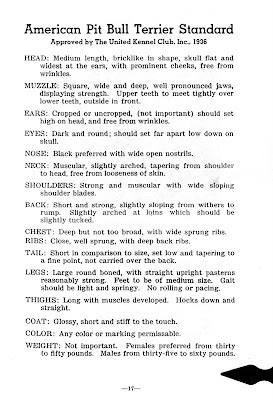 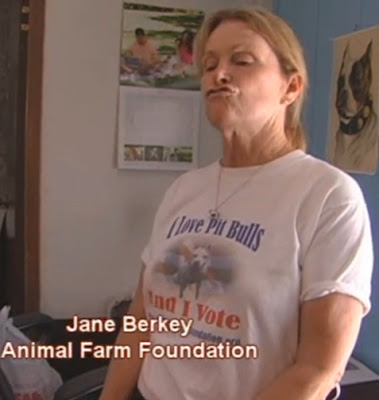 new york millionairess JANE BERKEY of the ANIMAL FARM FOUNDATION has made it her life's work to soften pit bull language and shade the truth around america's gripping dog. 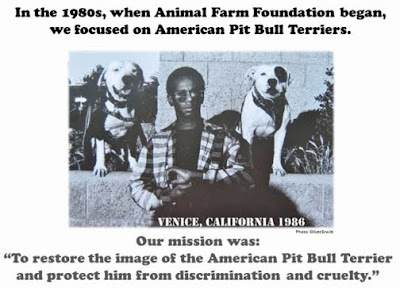 you can thank EDWARD BERNAYS, the father of public relations, for untruth in advertising. you can learn more about BERNAYS and how he transformed propaganda into a public relations empire in Adam Curtis' brilliant four part documentary The Century of the Self. i promise this will be the most enlightening four hours you ever spend on the internet.

Posts on this blog are always well done, but this one sets a whole new standard for excellence. Thank you!

Awesome Adam Curtis doc (Century of Self) reference. All of his docs are very good. I clicked through a few UKC breed descriptions and none were as enthusiastic and long-winded as the pit bull one. The pit bull is their 2nd most registered dog. For the AKC, the Amstaff is #70. So, it's obvious whom the UKC needs to cater.

We have seen this in military terms for so long! I'll never forget the "sorties"! Politically correct and "softening/whitewash terms" are out of control today. This harms our culture greatly. It seems that while civil and social rights groups built such language to protect and destigmatize persons (and medical conditions), the same technique was used to hide atrocities and other "defective products" like the American pit bull terrier.

When the UKC was originally created, it regulated dog fighting in the US and the registry requirement was three documented wins. They enriched themselves mightily through blood sport.

NCRC is now owned by the wackos at AFF.

These people make the tobacco lobbiests look like amateurs!

EXCELLENT WORK !!! I had watched some of this documentary on Bernays a while back, I believe, on the history channel - Thanks for the link - Now I can see the full story and pass it on to others - You amaze me on your journalistic ability to pull these stories together !!! I feel fortunate to be able to read it!!!

Here's a scary question....what would nutters do if no one was watching their machinations???

Maybe that's why they hate truth blogs, it cramps their style and teases them with potential accountability.

These documentaries modified and deepened my perspective on many things. Adam takes documentaries to the level of an art. I can't recommend them enough.

The poster with the black man and the pit bulls is pure propaganda. "Discrimination and cruelty" references when racial segregation was a recent national memory and a raw source of discord and shame! Fucking unbelievable! That pit bull advocates would use tremendous human rights violations to promote their dogs!

adam curtis is a genius in his own right. ive seen the trap, power of nightmares and it felt like a kiss. i never heard of "all watched over by machines of loving grace". i'll be watching that one soon. i'm a big fan of his work.

I will watch those films--I'm always looking for good stuff, and practically the only movies I watch are documentaries (if you saw my DVD rack, you'd think I was the most boring person ever). You have a sharp intellect, Dawn, and I would sure as hell hate to be on the wrong side of your scrutiny. My feeling is that you'd be fantastic in law enforcement, but I think you're too prickly to excel in a paramilitary organization.

miss margo, our boring DVD collections are similar. if you haven't seen it yet, i highly recommend THE CORPORATION.
better yet, BUY IT!

regarding your comment about SRUV, i couldn't agree more. SRUV is an extremely powerful communicator.

i struggle to tone down my direct and confrontational style. my preference would be to do the research and have branwyne (who is already extremely knowledgeable about this issue) present it in their eloquent, thoughtful and respectful style.

i am too prickly to excel in most organizations :)

Don't tone it down--your voice is tremendously entertaining. There is nothing like your blog on the internet. The Truth About Pit Bulls is great too--solid research--but Craven Desires is ferocious. Absolutely ferocious. One thing that struck me about it from the first time I read it is that you are an unapologetic hater. Which is fine--some things deserve to be hated. But it is unusual, especially for a woman in this culture (probably all cultures). Good for you!

there is a saying I heard once--that if you want to know about a person, look at what or who they hate. Tells you a lot about them.

I own The Corporation and have watched it many times. I saw it in theaters when it first came out.

Have you seen "The Fog of War" "Capturing The Freidmans" and/or "Downfall" (Downfall is a German film...last days in Hitler's bunker)? All jaw-dropping. I am fascinated by Robert MacNamara. Sociopath, but what a brainiac.


added your documentary recommendations to my netflix q.

here's a few other great documentaries: inside job, future of food, king corn, flock of dodos, the cove, end of suburbia, enron: the smartest guys in the room, jesus camp, manufactured landscapes, religulous, organsm inc, the f-bomb (documentary all about the word fuck , this is where i first heard fucktard)

How'd you get interested in psychopaths? Oh god, Macnamara will make you blow a lobe, then. Anyway, I ask because most people get interested after they've gotten burned by one. If that happened to you, I'm sorry.

Fucking ENRON! That movie made ME blow a lobe (thank you, twisty!). We studied the book in Org Psych seminars in my Ph.D. program. I was obsessed with it. Those assholes--they should have been guillotined during the halftime game at the Superbowl. With a raffle to determine who got to drop the ropes (raffle contestants: people who lost their jobs and pensions). I don't watch football, but I'd tune in for that! Matt Taibbi did a hilarious spoof of it.

The Cove was like a thrilling spy movie, but it made me so so sad. I'll never forget seeing the blood turn the water red. AND I'll never support a place that has captive porpises. I used to think it was great to see dolphins do tricks at Sea World. I never thought to wonder where they came from--I figured, "they must be healthy because they're doing tricks! They love the attention!" NEVER MIND. What a shitty thing to do to them.

I will look at the other films. TY for your suggestions!

it's nice to have friends who are as boring as i am :-)

Yeah sure they always say "Oh German Shepherds are next!"

But wsn't the importation of them banned in Australia in the 20's or was it suggested? Either way I don't like German Shepherds. Once again some of you may call me silly of a closet Nutter but the world would be a btter place without dogs bred for guarding/fighting. My two former dogs, now in heaven, were great guards and they weren't vicious. Everyone is going out and buying German Shepherds, Rottweilers(Russian Mafia Dogs) and other vicious breeds for guarding. They have been brainwashed into a sense of security by the people who breed them. Now that I mention it has anyone seen the breed standard for the Akita? They don't even hide how horrible those dogs are. Alas I'm sure some Nutter(Sabertooth and that other brat no doubt) are going to go on her and say it all about how experienced and devoted the owner is. Yeah be sure to tell your parents that when you sweet Pit Bulls turn on you. Although for the Lycan girl she might just save the Mauler the trouble by killing herself. I'm sure she'll fail at that again. Well I'm off to bed today was a good day(my soon to be ex hasn't called me) and I'm sure Sunday will be better. Have a Happy Christmas and be sure to keep an eye on your pets.

Jesus--are you for real, Westiewhoeverthehellyouare? What's the matter with you? I know we're on the Interwebz here and all, but you are acting just plain weird. I gotta ask--what's the point?

No, I don't think westiewest is for real. This person is trying to be undercover or something. Read about it here in the comments.

"Undercover or something...". Emphasis on "or something." What a ham-handed effort at...infiltration? What's to infiltrate?

Well, at least she's young and powerless. Otherwise this would be kinda creepy, if you know what I mean.