High conflict people (HCPs), or people who fall within the spectrum of the cluster B personality disorders, have a life long pattern of blaming others. One of their preferred dysfunctional tools is emotional reasoning, assuming facts from feelings. Emotional facts are emotionally generated false information that are accepted as true and appear to require emergency corrective action. According to Bill Eddy, there are three types of emotional facts: 1) real facts that have been exaggerated, 2) real facts that have been taken out-of-context and 3) non-existent facts based on the worse fears of the HCP (high conflict person).

Eddy sees the pain of the cluster B personality disordered people as fear driven. He distills each of the four cluster B types down to a single, basic driving fear. Those suffering from anti-social personality disorder, the sociopaths, fear being dominated. The narcissists fear inferiority. The borderlines fear abandonment. And the histrionics fear being ignored.

Eddy approaches the cluster B personalities with a great deal of compassion, much, much more than I am typically able to muster. His compassion for their fear and pain is admirable. I love his books. They are concise, easy to read and he provides much needed attention to the histrionic variant, the type most authors and researchers ignore.


High-conflict personalities don’t get very far unless they persuade others to adopt their cognitive distortions and assist in their interpersonal battles. In substance-abuse treatment, we call these persons “enablers”. They enable the abuser to stay stuck in negative behavior, negative thinking and avoidance of responsibility. I use the term “negative advocate” for enablers in legal disputes, because the adversarial process relies so heavily on professional and non-professional advocates. Enablers–often inadvertently–advocate for the cognitive distortions and negative behavior of HCPs.

High-conflict disputes don’t occur without one or more negative advocates–at least I’ve never seen it happen. On their own, most HCPs lack credibility. They seek negative advocates to justify their misbehavior and misconceptions, and to assist them in blaming others for their life problems–to advocate for them.

Negative advocates are those family members, friends, mental health professionals and legal professionals who try to help but get it backwards–they adopt or agree with the HCP’s backward thinking. They become persuaded–especially by Cluster B persuasive blamers–to focus all their attention on other people’s alleged misbehavior. They help the HCP to avoid responsibility and hold others responsible for their own problems and behavior. They agree with and advocate for, the cognitive distortions of HCPs: their all-or-nothing thinking, emotional reasoning, personalizing events, exaggerating minor (or non-existent) events and minimizing their own major misbehaviors. Negative advocates help HCPs stay sick.

Negative advocates absorb the high-intensity emotions of the HCP and often enhance them to a higher level of urgency–they amplify their distorted thinking and join in generating emotional facts. They have adopted the HCP’s process of emotional reasoning. If family members, friends and professionals would become more skeptical and avoid becoming negative advocates, high-conflict disputes would significantly reduce the pressure on our legal system.

My initial plans consisted of just a part 2 but I realized it would be better if it was broken up into three parts. I will complete the trilogy with High Conflict People Part 3 soon. Estimated publish date: July 4th. In the meantime, I hope you will click on the above link and purchase one of my all time favorite books. It is money well-spent.

This is long overdue.

Over the past decade I have observed a dramatic increase in high-conflict legal disputes––an increase driven more by personalities than by legal or financial issues. Perhaps half of all legal cases that go to trial today involve one or more parties with a HCP. In these cases, the conflict is driven more by internal distress than by external events.

After handling more than a thousand legal cases from three professional points of view––as an attorney, mediator and clinical social worker––I have recognized some surprising patterns to the high-conflict cases that are threatening to overwhelm our courts:

A little over two years ago I discovered a nifty little book titled High Conflict People. This book is devoted entirely to the spectrum of Cluster B personality disorders, one of my favorite topics, and their impact on our criminal justice system. The author, Bill Eddy, is a licensed social worker and a lawyer who has first hand experience dealing with this challenging bunch in both the mental health and the legal systems. Within the first two pages of chapter one that I quoted above, I saw how easily Bill Eddy's work applied to pit bull advocates. I intended to blog about it but for one reason or another, I never got around to it and it fell off my radar. The recent interest in me and my blog brought it back to the forefront.

The following is an excerpt, including the cartoon and table, from another book by Bill Eddy Managing High Conflict People in Court. 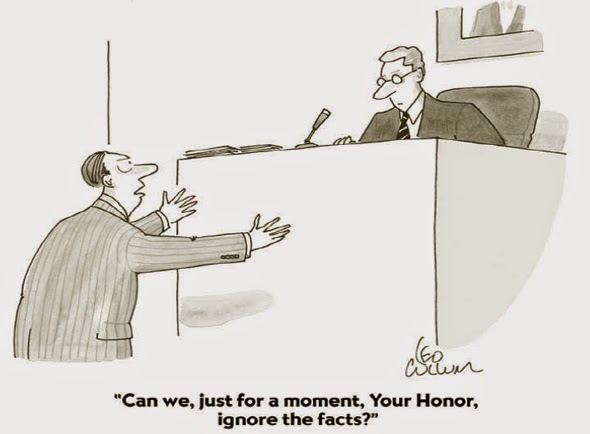 An Attraction to Court Process

This author believes that over the past fifteen years our courts have become a prime playing field for undiagnosed and untreated personality disorders. This is because the adversarial court process has a similar structure to their disorders, combined with increased media exposure of courtroom procedures and dramas during this same time period. Ironically, while practitioners and parties experienced in the adversarial court process are making a significant shift to alternative dispute resolution methods (arbitration, mediation, settlement conferences, private judges, collaborative law), those with high-conflict personalities (HCPs) have become attracted to the traditional litigation process, seeking “my day in court.” The following comparison from the author’s book, High Conflict People in Legal Disputes (2006) shows a striking fit: 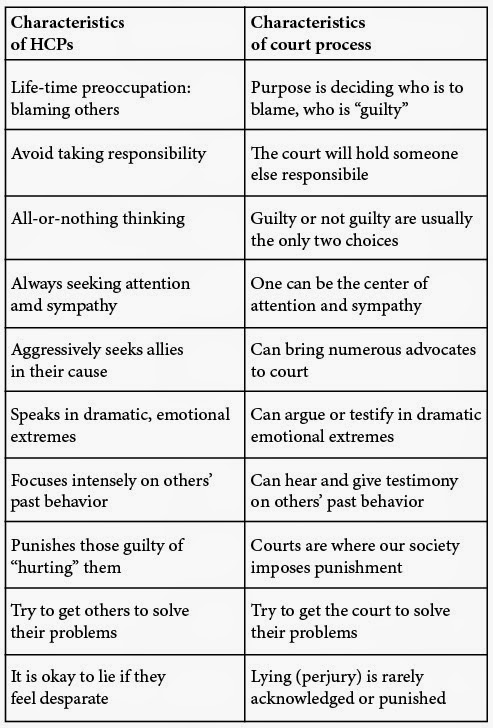 Because the thought structure of HCPs and the adversarial court process are such a perfect fit, HCPs are at times effective at making innocent people look guilty, while at the same time with their desperate charm and aggressive drive they often succeed at looking innocent themselves. Many cases that appear to be two HCPs fighting are actually being driven by only one party who successfully makes the other party look bad. (Friedman, 2004)


Does anyone else see the striking similarities between high-conflict personalities and pit bull owners and advocates?


I highly recommended the following books by Bill Eddy:

It's All Your Fault!: 12 Tips for Managing People Who Blame Others for Everything, 2012

If you can only purchase one, I recommend High Conflict People in Legal Disputes, 2012 but if you can afford them all, do it. Eddy has many more books on the subject and I will eventually get through them all.

In High Conflict People Part 2, I will explore the recent shenanigans on this blog.