swagger in, slither out

profile of a dangerous dog lobbyist. 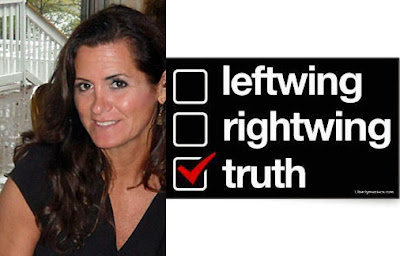 
LOLOL...You guys are priceless...!Not a clue, any of you? SO sad...but easily herded, I would imagine.Can any of you figure out why anti-pit bull people run and hide when I offer to debate them on canine behavior, training, breeds and dog bites? I'm a little stumped as all of you are so outspoken and self-proclaimed experts, posting charts and statistics as if you gave birth to a new solar system...So, when any of you are ready after your quick Google search for propaganda to use as ammunition....let me know...I have been a bully breed owner for over 20 yrs. I train, I've worked my dogs....and I was a legislative director for several all breed working dog organization. Oh, and I co-authored dangerous dog ordinances in several cities....Ready for me???? (Morons getting ready to ban me from this page in 3,2 .......1 ! )

of course i published her comment immediately and accepted her challenge. i continually checked for her reply, eagerly awaiting her public thrashing. hours went by, then days and LISA MARIE CAMUSO, dog trainer extraordinaire and hot shot "legislative director" and co-author to the pit bull stars was a no show. :-(

so i looked for her.

i found her barren facebook page. her profile pic consisted of her dedication to the party of truth and a couple of comments, there were no photos, friend list, likes, nothing to substantiate her grandiose claims.

i don't think i have ever encountered such hubris in a nutter before. color me intrigued and disappointed. since LISA MARIE CAMUSO didn't return to put me in place and since massachusetts is of special interest to me and since i had an hour to kill... google to the rescue.

i didn't find anything to demonstrate LISA'S superior knowledge of dog bites and since she didn't return to educate me, i will assume that her special knowledge is simply a regurgitation of KAREN DELISE'S schtick: intact resident dogs that no one can identify, yadda, yadda, yadda.

i was able to glean LISA MARIE CAMUSO'S skill level as dog trainer/behaviorist though, thanks to an old PBF thread. 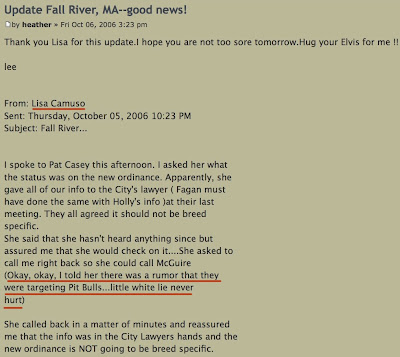 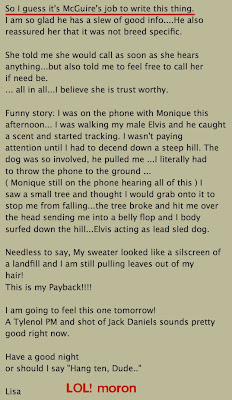 be sure to click on these to view larger and enjoy!

here is another example of her superior dog training skills.

as to her claim of co-author of dangerous dog laws, i suspect there is quite a bit of exaggeration there. LISA MARIE CAMUSO did appear to be the legislative liaison for the american working dog federation but according to the 2008 minutes, her involvement might have consisted only of attending meetings and hearings. i have yet to find her named as an author. LISA MARIE CAMUSO may have had some success imposing her unfettered dangerous dog agenda on our greedy, spineless, weak kneed, lily-livered, chicken-hearted, yellow-bellied elected officials. the unfortunate reality of american politics is that the special interest groups are running show thanks to the greedy, spineless, weak kneed, lily-livered, chicken-hearted, yellow-bellied fucktards that we elect to office. no reason why the lobbyists for dangerous dogs should not enjoy the same privileges as monsanto and the predatory banks. money talks. i found plenty of examples of LISA MARIE CAMUSO acting as conduit to the rest of nutterdom whenever BSL was being considered. 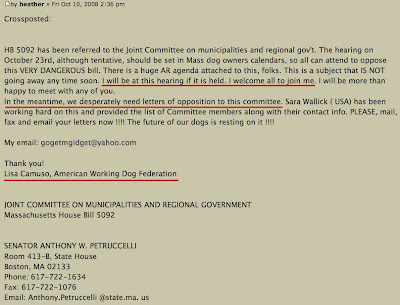 think i am being to hard on politicians? check out the council minutes from methuen, mass in 2006. during a public discussion on muzzling PIT BULLS in the city, a couple of nutter sisters showed up to protest muzzles, as did LISA CAMUSO of franklin and HOLLY STUMP of ipswich (another professional pit bull lobbyist), and some nutter by the name of BONNIE. the city did not require BONNIE to state her full name or full address but happily indulged her fanaticism.

my google search of LISA MARIE CAMUSO shed more light on her character than the specialized skill set she boasted of.

i found LISA MARIE CAMUSO trying to tell a "little white lie" to a kentucky hunting forum but it back fired. the good old boys appear to be sharper than our elected officials. link one and link two.

little white liar LISA CAMUSO tried to whip the hunters up in a fear frenzy with the promise that their beagles, labs and retrievers were in danger of being banned under a law being considered in louisville. when in reality, the law targets "any dog that is owned for the purpose of harming or fighting another animal".

"A total of 7 breeds of dogs are specifically named as "dangerous" and subject to mandatory spay/neuter.
Intact dogs of those breeds, which include American Staffordshire Terriers, Staffordshire Bull Terriers, Dogo Argentinos, Cane Corsos, Presa Canarios, Dogue de Bordeauxs and American Pit Bull Terriers are subject to special permits, insurance requirements, muzzling in public and special enclosure rules.
A special permit must be bought to own an intact dog of any of these breeds, and Councilwoman Cheri Hamilton has already announced her intention to add more breeds in future!"

(more breeds in the future likely consisted of bandogs, american bulldogs and all of their ugly mutations.)

LISA MARIE CAMUSO concluded her histrionic plea to kentucky hunters with names and contact information of the 26 louisville council members.


where is the part about outlawing hunting dogs.
I'm not calling you a liar but where is your proof on your allegations this is pretty harsh stuff and needs some sort of substantiation regarding your statements about one person.

Never knew a pitbull or any of the other does you listed were hunting dogs...

I agree and say this in no way is for hunting dogs...like said my lab is a retriever. The dogs listed are banned in alot of places around the U.S. Presa Canarios are pit bulls on steriods, Dogo Argentinos are pretty vicious too, as the others can be. I know most are used as guard dogs mostly. I know people that have a few of the listed breeds.

There's a HUGE difference between a pit bull and a lab and it looks like they have failed to acknowledge that. Sounds like you guys have some Psycho's up there in Da Ville.


she displays a consistent pattern of deception and obfuscation.

as vintage says "check back so we know that you have not been mauled or incarcerated." or maybe just let us know if your lithium kicked in.

Joan of Barf for Pit bulls, Camuso
Appeared not for her big-tent roadshow
And left the simple villagers leaderless, and moronic
For patent nostrum teachings
much like a cheap colonic
A sheeple dip and tonic
To rid our minds of
Facts and phonics
We foolishiy believed were truth;
And as we milled with vacant minds
To learn about canine Frankensteins
The tattered stage curtain fluttered with fallacies breath
We awaited the Gospel that pit bulls abhorr death
But imbeceles must accept life as disappointments come:
Evaporating fast as deadly methane gas
Camuso was gone in 3...2....1.

the flame that burns twice as bright burns half as long

Or a seventh as long compared to Leah Purcell. Purcell managed to run her dog rescue grifter operation for 28 years! 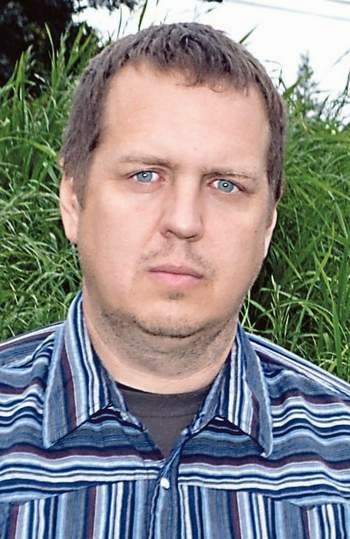 When Markwell was approached by some of the local color in Forks, WA for a pit bull, he told them, "Don't come around here anymore. Tell your friends the dogs are dangerous, but the owner's worse."

Steve Markwell burst onto the dog rescue scene in 2009 armed with promises, grand pie in the sky plans and a handful of fairy dust to sprinkle into the lattes of gullible rescue angels only to find himself in a heap of legal trouble four years later.

Fast forward to 2015. This week MARKWELL admitted to violating the Charitable Solicitation Act and its Consumer Protection Act. The Washington state dog whisperer and one time speaker on the subject of breed specific legislation at the University of Washington Law School (page 4) in 2012 faces fines totaling $96,000 for 48 violations plus over $20,000 in legal fees after soliciting over $360,000 in donations to his house of horrors charity from 2009 to 2011. The judge could also order MARKWELL to return the money that he duped from fellow no kill kooks. MOMMY!

A few gullible political correct organizations pimped Markwell out and presented him as someone to respect and mimic but only Idea Mensch deleted the piece they ran on Markwell in 2009 (good thing i saved a pdf!). He is still listed as number 32 of 33 entrepreneurs who make this world a better place but his individual spotlight has been purged from their website. You would think that an honest organization would seize the moment to teach people of the dangers of con artists instead of sloppily trying to bury the truth. Even the famous psychopath researcher, Dr. Robert Hare admits that he can be fooled by these creatures.

Markwell's bottom feeding attorney could not be reached for comment

OAS - life inside the sanctuary

High Praise in the LA Times

care2 explain yourself Markwell to your gullible followers? 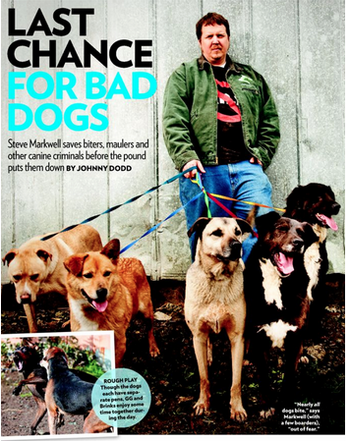 Please be sure to check out the latest edition on The Truth About Pit Bulls.