be sure to check out the most current rescue scandal at Maul Talk, it's a doozy.

Scorched Earth has the latest on the BONES saga. Part 6

And vintage asks, should we call pit bulls Lifeflight Dogs? 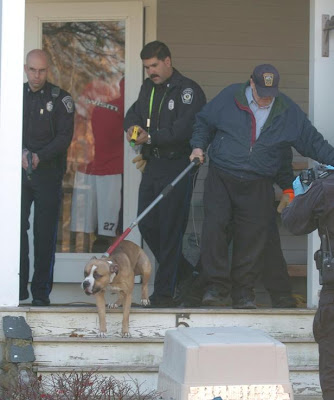 On the way to the vet to have a 71 year old woman's face sliced out of it's tummy...Trigger happy Police officers stand at the ready in a callous, discriminatory manner while the stunned owner says "Good Bye". ~vintage

We are the Majority

The project has gotten a LOT of contributions!  Nutters LOVE it!  The AFF made a little video highlighting just a few of the photos that were sent in.  It takes 2 seconds to realize that one unspoken thing they want you to know is that there are WHITE pit bull owners!  heavens!  I started counting the white, brown, and black faces.  The first non-white face appears 12 photos in.  I got bored after I'd counted 60 white faces, 5 brown faces, and 6 black faces.

The second thing you realize after looking at their video is they show lot's of teachers, fire fighters, police officers, engineers, nurses and chiropractors.  Oddly, I saw no pole dancers, repo men or bartenders among the photos even though many of those people are nice, fine, and upstanding citizens, too.  And I'm betting there's no shortage of pit bull owning repo men or bartenders. They say teacher is the number one profession listed among the responses.

So, they don't want you to stop thinking in stereotypes.  They simply want you to think about the positive stereotypes associated with some professions and some skin colors instead of the negative associations people have about pit bull owners.  Associations such as that idea that criminals and other deviants are more likely to be attracted to pit bulls and other dangerous dogs - which happens to be true and to have been described in a peer reviewed study.

Funny thing is just because the stereotype of teachers is that they are kind, intelligent, and helpful people, that doesn't mean they all are.  When you google "teacher convicted" you get about 10 pages of results, and I bet you won't need two guesses to come up with the number one crime they're convicted of.  Yeah, sex crimes.  And it is no surprise that googling "police officer convicted" gives up a mountain of results.

Being a teacher doesn't lead you to own a pit bull.  Embracing deviance from the norm to some degree leads you to own a pit bull.  You might merely feel you don't adhere to stereotypes held by most people (the norm) and since you're not a sheep, you embrace pit bulls because you like to "think outside the box" (deviate from the norm).  But people who are just straight up, hardcore, illegal deviants from all socially acceptable behavior  ALSO love their pit bulls  - big time. Take Kim DiPrima, special education public school teacher, for example.  DiPrima was convicted of second degree manslaughter in 2009 after her pit bulls, Popeye and Brutus, entered her neighbor's yard and mauled 90 year old veteran and retired crane operator, Henry Piotrowski, so badly that he eventually died.
She got 5 years probation and continued teaching until she was later charged with second-degree attempted murder, second- and third-degree criminal possession of a weapon and first-degree reckless endangerment for another fracas involving a felon ex boy toy and gunfire. Read a good write up about all the felons involved here.

Some upstanding people who own pit bulls are lucky and no living thing is ever hurt by their pit bull.  Some fine, upstanding people who own pit bulls quickly get rid of them at the first hint that the pit bull's genes are expressing themselves.   Some upstanding pit bull owners don't get a warning and experience the gruesome loss of a loved one to a pit bull attack.  Many, many deviant pit bull owners wreak mayhem, havoc, maiming and death on entire neighborhoods with their pit bulls because they just don't care unless it affect them.

The fundamental truth is this: Pit bulls maul, maim and kill more people than all other kinds of dogs combined.  They kill literally tens of thousands of pets and livestock animals every year.  So, if you, your family, or your animals have been attacked by a pit bull, you are the majority. 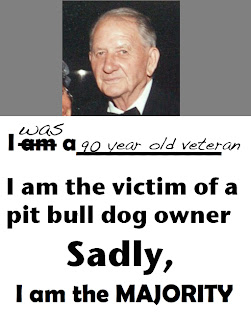 I came across a picture of a poor poor pit bull with a contradictory statement. We all know that the pit bull party contradicts themselves. I'll admit that some of them probably don't know they are, but I really hope they realize this fallacy. 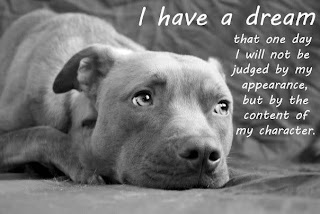 "I have a dream that one day I will not be judged by my appearance, but by the content of my character."

1. Pit bulls' appearance isn't really what makes them dangerous. Sure, their visible strength plays a major part in the danger, but the appearance of their face has not killed anybody as far as I know. (However, looking at a pit bull can trigger an attack.)
2. It's the "content of character" - their behavior - that makes these dogs so dangerous. Pit bulls have so much character that they maul the children they're playing with!

Long story short, the "content of character" already is what these wiggle butts are judged by. I'd like to thank the original creator of this picture for furthering the pro-BSL efforts. It's this kind of contradiction that will soon become the downfall of the pro-pit propaganda.
Posted by Dignitas at 1/21/2013 64 comments: 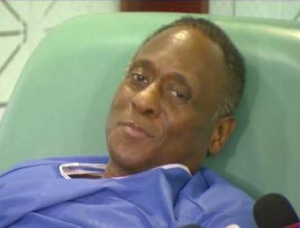 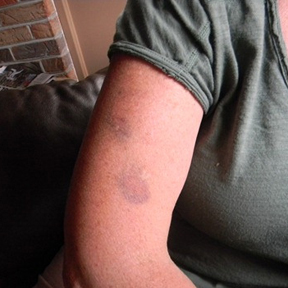 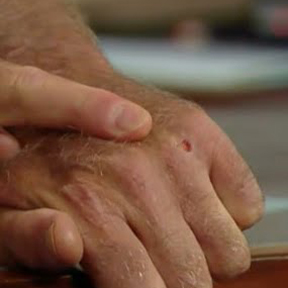 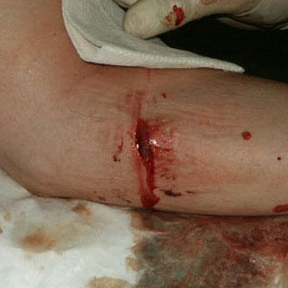 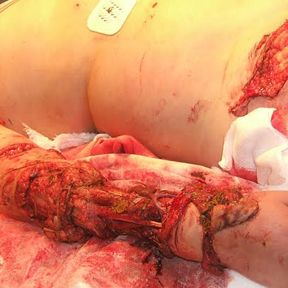 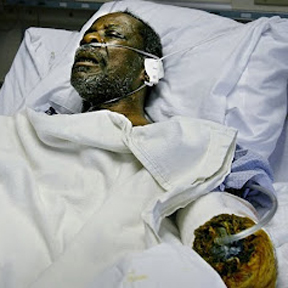 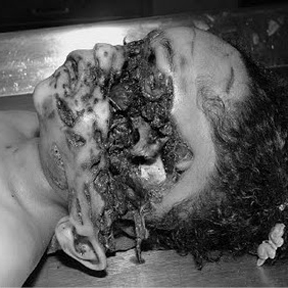 favorite quote of the week