Is an american bulldog a pit bull?

fuzupf's panties are in a bunch because someone in missouri called an american bulldog a pit bull. according to fuzupf "if they can say an ambull is a pit bull than a: malinois is a GSD, a husky is a malamute, a bull mastiff is a poodle..."

the answer to fuzzy's question: it depends. it depends on your definition of "pit bull". according to my definition, yes the american bulldog is a pit bull. i believe pit bull has two definitions. the first is slang or an abbreviation for the american pit bull terrier. the second refers to a type of dog. and by type, i mean function – herding, retrieving, pulling, pointing, racing, guarding, tracking etc. in the case of "pit bulls", that function is GRIPPING. gripping dogs were bred for fighting and baiting. gripping dogs were bred to perform dangerous, violent jobs and refused to quit; APBT, american staffordshire terrier, staffordshire bull terrier, the original boston bulldog, bull terrier, dogo, presa, and yes american bulldogs and alapaha bulldogs. at one time boxers and great danes would have been included in this category but they are now only bred as companions and lack the physical prowess for their original function.

back to fuzupf, his logic is not even close. a better analogy would be a husky is a sled dog, a lab is a retriever, a gsd is a herding dog, a beagle is a scent hound. let's see if fuzzy can find two neurons to rub together and connect the dots.

brief history of the american bulldog
1700's original british bull baiter comes to america and morphs into the bulldog.
1835 blood sports are criminalized in the UK and the bull baiter is phased out and the fighting nanny dog is phased in.
1960's american bulldog is on the brink of extinction. a handful of bulldoggers get together and resurrect the ambull. there is not enough genetic material available so they use pit bulls. 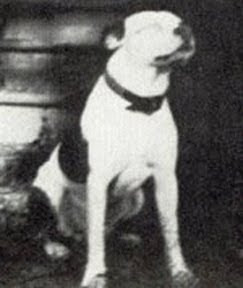 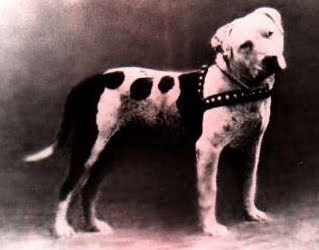 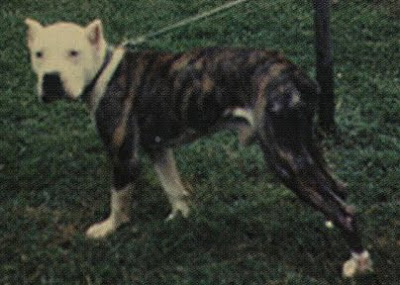 MAC the MASHER, ALAN SCOTT'S foundation dog for his performance line of american bulldogs circa 1960. 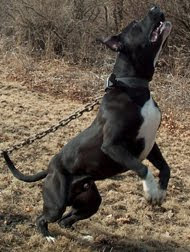 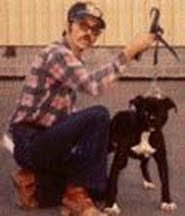 DIXIE BLACK JACK, purebred american bulldog
check out the pedigree of SCOTT'S DIXIE BLACK JACK. surprisingly LITTLE information about daddy's side of the family. i wonder why? 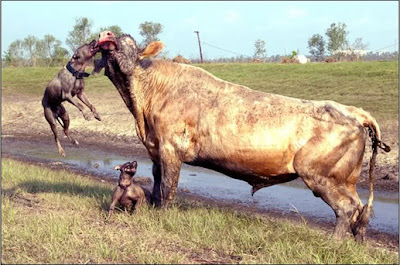 maybe we should abandon the terms "pit bull" and fighting dog and replace them with a more basic yet accurate definition - GRIPPING DOGS. i can't take credit for this. the credit belongs to APBT diva, DIANE JESSUP.

some of my favorite quotes from JESSUP'S website: "I can produce health tested, sound, people friendly, utterly tough, athletic gripping dogs with the drives necessary to make them of legal use to today's society - as they have been of use for centuries past."

American pit bulls which display behavior "typical" of their heritage are gripping dogs; they come from a long, long genetic history which dictates they get a hold and HANG ON!

Hunting with dogs is controversial, of course, as some people consider it cruel to both the game animal and the dogs. However, like it or not, gripping large game is the working heritage of this breed.

apparently JESSUP gets a little excited when dem hogs gets to squealin too. she directs her fans to a couple of hog doggin videos - here and here. so people can see what a good pit bull and a cur pit bull can do. 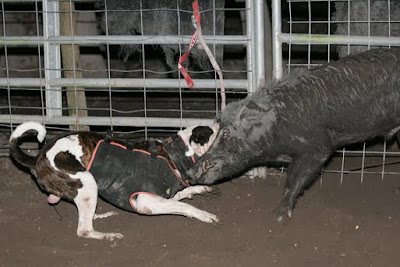 the alapaha bulldog is another example of a gripping dog. this bulldog also sports a fair amount of APBT in their blood. one alapaha breeder WILLIAM CHESTER is described as an "Ol Pit-Bull Man" who bred alapahas that were often man aggressive. CHESTER'S old family silver dollar recipe: catahoula x apbt x mountain bull. WARREN LANE was another breeder who infused apbt into his strain of alapahas, although there is no mention of man biters. LANE'S motto "a Bulldog should look at you and through you". i have been on the other side of that reptilian stare.

oh and don't forget to vote in the fuzupf poll at the top right corner of the page.

gripping pit bulldogs and their owners scorching the earth

given the huge success of my first gripping dog blog post and the scorched earth tactic the nutters have taken against it, i decided it was time for a sequel. and how serendipitous, not one but two gripping dog fatalities this month.

scorched earth – a tactic that involves destroying anything that might be useful to the enemy.

the first time i heard the phrase was from this clever blogger who employed it to describe the aggressive nutter campaign that overturned the pit bull law in ohio. the nutters have also used the tactic to kill the pedigree links and completely re-write the american bulldog history.

normally, i probably wouldn't go to the trouble to fix all of those links but while craven desires is creeping up on its 750,000th pageview, is an american bulldog a pit bull? occupies the most popular blog post which is fast approaching 60,000 pageviews. snack sized dog's blog about the tehachapi bully is the next most read blog post at nearly 22,000. i get that, TORRES is a celebrity hybristophiliac and the vapid consumers of american pop culture are a bottomless pit when it comes to celebrities. but it is puzzling to me why the bulldog blog gets so many hits (approx 3500 each month!). last week i read it again and clicked on a few links and discovered all of the pedigrees were redirected to german shepherds and the american bulldog profile at molosserdogs.com had been completely re-written. every reference to pit bull blood (as well as other manstoppers) in ambull ancestry and current breeding trends had been deleted. hmmm.... good thing i saved the evidence. pdf to the rescue!

2010 molosserdogs.com profile of the american bulldog


Even though the Scott type was directly developed by crossing early Johnson's dogs with more tenacious breeds, such as the American Pit Bull Terrier, it is gradually becoming accepted as the breed ideal, regularly outperforming its ancestors.

There are also some unpure bloodlines to be found, so potential buyers should be careful. Boxers, Bullmastiffs, Presa Canarios, Olde English Bulldogges, AmStaffs and other bullies are at times crossed into the American Bulldog bloodlines, sometimes with the intention of improving its working abilities, but more often simply for appearance and other reasons.


now compare the 2010 breed profile of the gripping bulldog to the 2012 breed profile on molosserdogs.com. you will not find PIT anywhere on that page.


the breed profile at dogbreedinfo.com was also watered down. although i didn't include it in the previous blog post, i will include it here.

It is said "fighting off one of these dogs is like fighting an animal that possesses an alligator's head and a python's body."

quite a bit tamer, wouldn't you say?

nutters like dawn capp try to redirect the focus of blame onto those evil little terriers in an attempt to minimize pit bulldog danger with nonsense like "all terriers are animal aggressive". but the problem with "pit bulldogs" is not the terrier half, it's the bulldog half! why? because aggression isn't the only issue, tenacity carries as much if not more weight. aggression doesn't set the pit bulldogs apart from other dogs, tenacity does.

tenacity, you know it when you see it. and we see it all of the time, most notably when 5 london police officers were hospitalized by one berzerking pit bulldog last summer.

after i updated the links to the "purebred" american bulldogs, i got caught up in the peds, again. all of the "purebred" american bulldogs that i linked to traced their roots back to FLOYD BOUDREAUX'S MAVERICK ROM. it's sometimes hard to keep all of those grippers straight, i had forgotten that MAVERICK was the descendant of BULLYSON, a well known man biter that you can read more about here and here.

terrier? or bulldog? what exactly defines the pit bulldog's essence?

here's a discussion from game-dog.com to help clarify. 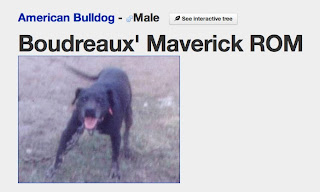 BOUDREAUX'S MAVERICK ROM pedigree at the ambull site listing only the first generation. 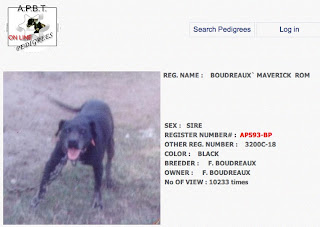 
so there you have it. a famous man biting pit fighting BULLDOG'S blood proudly pulsates through the american BULLDOG.