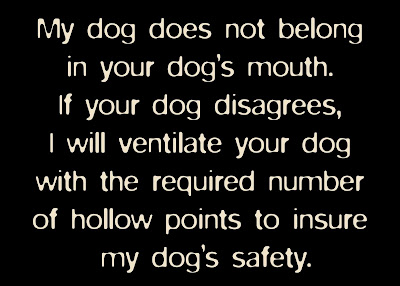 There is a war going on out there. Arm yourselves.
Posted by scurrilous amateur blogger at 5/01/2019

Labels: arm yourself before not after, ohio

The attack on this tiny dog and the frail elderly owner should make breed advocates feel shame. Nope, they can't manage shame so they go with belligerence and disdain.

Nutters don't care about other animals. They actually gloat when their dogs kill things.
I do not know when it will ever stop.
I no longer take my dogs anywhere for fear of them being killed.
The public is clueless and pit pushers are everywhere.

I have a deep regret in my life....that the dog that killed my dog left on four legs, lived a nice long life until it went "senile" (so I heard from the gossip of the hood) and it was humanely put to sleep. The jerk owner now has an ugly Rottenmauler, but has at least fixed the front door. A decade later, that window is still broken.

People need to know its okay to get medieval when your pet or any animal or human is attacked by someones personal fur weapon .

Tell the cops you were defending yourself.
Sadly pets are considered just property and in many places you are not allowed to shoot over "mere property".

You are allowed (in most parts of the US) to defend yourself.

Just keep that in mind for talking to the cops afterwards.