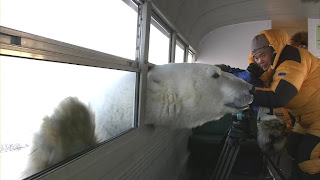 i know it's a polar bear but i love this photo.

A very funny piece written by Andrew Holota, Editor, The Abbotsford News, a Black Press newspaper in beautiful British Columbia.
Holota doesn't need any of my sarcasm to help make his point, he does just fine on his own. And since I don't trust news links to stay live forever, here it is, in its entirety.
Thank you Andrew!

Well there, it’s out of the bag now.

The great, grand conspiracy of the media to destroy the fine upstanding reputation of pit bulls, by only reporting on attacks by this particular breed, and covering up police shootings of all other canines.

This happens everywhere, don’t you know, or at least according to the pro-pit bull/media conspiracy theorists.

Yessir, there are oodles of poodles popped by cops all the time, and the press does not report it.

And attacks by psychotic shih tzus? Covered up. Muzzled, so to speak.

Children savaged by Scottish terriers? Quashed. Hushed puppies, if you will.

You see, you can understand the owner of the crazed corgi not contacting the media to report a violent incident involving his beloved pet, who has just taken a chunk out of Mrs. Hurtinheinie’s rear end.

However, there is usually someone else involved in these things, like say, Mrs. Hurtinheinie, for instance, who just doesn’t want to stay quiet.

The victim usually feels somewhat put out having been punctured by someone’s dear pet, and they tend to call the press or TV to make it public.

Do you have any idea how difficult it is to cover up those devastated victims of vicious attacks by manic Maltese, wild whippets, and belligerent bassets?

It takes a huge amount of coordination and cooperation between multiple levels of media to ensure this information never reaches the general public. Because, of course, if the media ignores them, these ‘other dog’ victims have a tendency to tell other people, like their family, friends and neighbours, and then it’s out there!

Multiple attacks by insane Danes, and unbalanced beagles – all suppressed.

I have a theory, too.

Could it be there are more stories of cops taking on pit bulls because bad guys like to keep pit bulls around? For some reason, the bad guys just don’t have the same affection for Airedales.

So, maybe that’s why more pit bulls get shot by cops than say, by mail ladies. I mean, when’s the last time you heard of a mail lady emptying her semi-automatic handgun into a demented pit bull?

Wait ... mail ladies don’t have semi-automatic handguns! And mail ladies aren’t likely to go barging onto a property that has a pit bull snarling and foaming away behind a big gate watched by video cameras.

Whoa, do you suppose that’s maybe why the bad guys have got pit bulls? To keep people like mail ladies and other prying eyes away from their nefarious activities?

But those darned police just refuse to stay away – probably because we pay them to get bad guys.

So if a pit bull is hellbent upon disassembling their body parts, the cops might try gentle persuasion like pepper-spray and Tasers for a bit before they lose patience, and administer the 9-mm pill.

Another thought ... maybe pit bulls get such a bad rap because that mix of breeds is highly prevalent in child maimings and fatal canine attacks. The media has noticed people tend to be interested in children and death.

Hey, a crazy theory, I know.

However, we have a conspiracy to organize. Today, we take on pit bulls and their owners.

Tomorrow, we take over the world!

It is shocking that the pit nutters have not gone on the attack.

Thank you for sharing this post. Pit bulls are inherently dangerous dogs - how you raise them can influence their behavior - but they never have been and never will be safe nanny dogs.

There was an old "Cops" episode in which the call was to the killing of a pet dog by a neighbor's pit bull--amid the chaos of the elderly owner's anguished wailing and cries to "kill it" (the pit bull was not present, having been corralled by the owner) there lay, alone, in the entrance to its own doorway, a little dog, pathetically still, heartrendingly sad under the welcoming porch light...soon, the hulking pit bull, tail tightly tucked between it's grotesque meaty thighs, was bundled into the AC wagon--cop asks AC person if dog will be destroyed, answered, "don't know", and all is tidied up except for a sobbing, devastated old lady. The cop offers this overview, before leaving "Seems like we get these calls every week--and it's nearly always pit bulls"
Imagine the scale, nationwide, of the unreported, almost routine, carnage, on these animals that we dearly love, but then are to believe that the media manipulates (to what purpose?) to make us believe in a threat that doesn't exist)
Also, this matter of how other breeds, especially poodles and chihuahuas, are more prone to bite --I have worked in boarding/grooming kennels and as a groomer, and of the thousands of dogs and many thousands of hours working in close contact with dogs of all breeds, I've been bitten 6 times, none seriously, and none by poodles-or chihuahuas-dogs are generally pretty polite about not using their teeth, and don't seem to get pleasure when they do--but there is a breed driven to do it - with pleasure.