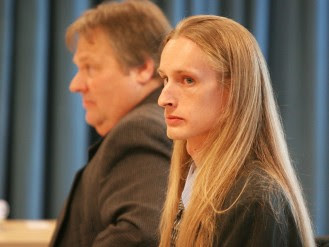 while coverston was in michigan, his four pit bulls (ronin, sherman, maui and otis) got loose and attacked a 17 yr old male. coverston was very surprised to hear about the attack citing "they're very sweet" and "they listen to me very well." now he is in deep shit. the city has his dogs and they want to kill them. and so do i.

coverston lawyered up and is trying every trick in the book to get the dogs back, well at least one of his dogs.

first, he challenged whether or not the city PROPERLY seized the dogs. at the hearing, the court discovered that the owner is unable to physically control his dogs.

Ruffcorn said the dogs were taken by animal control “without incident.” However, he noted that Daniel Coverston did not appear to have control of the animals. He said as one dog was escorted out of the house at a time, another dog broke loose and was running around the outside of the property. Another dog became agitated in the car and his head broke through a window screen.

“The dogs were not aggressive but it was clear that Daniel did not have control of the dogs,” Ruffcorn said during the hearing.

at the end of the hearing, his lawyer stated they would not contest the seizure. 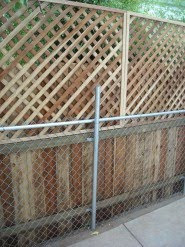 coverston claims to have escape proofed his yard. he poured 6 inches of concrete at the bottom so they cannot dig out and added a taller redwood fence outside of the chain link with a lattice top. i hope you fixed that gate. 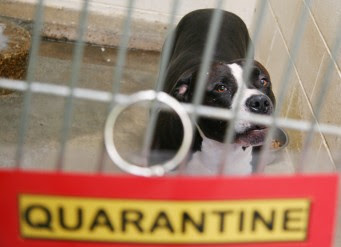 coverston is begging for ronin to be spared. ronin was described by the animal control officer as the dominant dog and the most aggressive of the four. coverston described ronin "like my son" and the dog that he has "the craziest bond" with. coverston has promised to neuter his dogs if they are returned to him, although i have a sneaky suspicion that their "crazy bond" might be jeopardized.

Coverston told the court earlier that his dogs had received their most recent anti-aggression shot from the vet clinic seven months ago. He said he does not give his pets the shot.

Representatives from North Fork Veterinary Clinic declined to comment when contacted by the Journal.

this is hilarious. not only do i find NO mention of these shots anywhere on the internet EXCEPT in THIS news story, i consulted with a vet and guess what?

meanwhile, the case is still open. criminal charges may still be filed against it. coverston and lawyer are sticking with the anti-aggression shots defense.

Yes, CA has laws against this sort of activity. He does look quite a bit like you, Marty, if nothing else a bastard son. And those shots, he can be referring to medication for thyroid. Seems problems with the thyroid can cause aggression and they may be treating for that. Otherwise there is no such thing as "anti-aggression" medication. Give him credit for creativity, the first nutter in awhile to come up with a new excuse.

Well, pretty scary that he wants the dominant dog the most because it's like his son!! What kind of family is that ? Unprovoked aggression? I can't believe these dogs are even still alive. Geez.

The only injection I can imagine is long-acting estrogen. Or progesterone. Both would theoretically reduce testosterone related behaviors, but in a dog like this, there is more at work than testosterone. Neutering this dog would do little if anything, so the injections would likely be as worthless.

If they have to mitigate risk, they should demand total mouth extractions. Remove ALL teeth. Dog gets to live and the next person it attacks will only be bruised, perhaps broken bones, but likely not die.

People are so f'g stupid.

The Attorney looks like he may be related to this Dogman wannabe..Probably an uncle or something.

You can tell by his expression that he`is wondering how he got stuck with this turkey of a case..

She is too skinny and ugly. Too frail for big Russian like me.

Where are is business and income tax records?

Selling to fighters? What about taxes?

This creep has opened a can of worms.