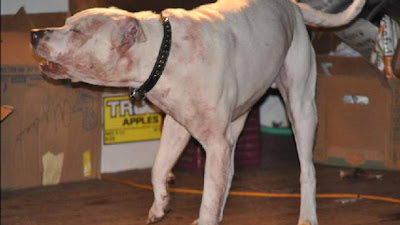 me and dick share a love of fabricated attack stories. here's my favorite dick. can you out do this one?

March 12, 2009
Agents: Couple Blames Cougar For Attack From Own Dog
a washington state couple were hospitalized with serious injuries, which they blamed on a mountain lion attack. they were attacked by their own pit bull.

the state fish and wildlife agents didn't find a cougar but they did find a white dog covered in dried blood at the couple's home.

pierce county sheriff did not file charges against the couple. no word on what happened to the dog.

this story really holds up over time. it is just as funny 9 months later, maybe more.
Posted by scurrilous amateur blogger at 10/15/2009

Hospitalized both owners!!!! How much you wanna bet they kept the dog!!!!!!!

Ha ha. I don't think this fabricated attack can be topped.
We probably won't we ever hear from Frank/Dick again.

This is Pit Bull Advocacy at it's finest....

Actually, there was an incident down south at an exotic animal facility where the nutter blamed a Pit mauling on a tiger...It took authorities a couple of weeks to uncover the ruse.

Oh, I still enjoy reading what you cunts have to write about.

Dogbites you never hear about said...

The Federal Judge ruling in a nutshell!!!
This ruling by a federal judge (an esteemed Constitutional
scholar) is a profound victory.

This precedent has far-reaching implications, and sets the
stage for class-action lawsuits nationwide - anywhere similar
ordinances have been enacted, and Constitutional rights of pet owners have been violated

Highlights of the FEDERAL ruling:

1. Pets are personal property, under the Constitution. Due process, search and seizure, etc.. all protections provided by Constitution apply to pets.
You are the OWNER of your pets (not the "guardian.")

2. Requirements for housing, treatment, etc.. cannot be mandated by legislation to be different for intact dogs (vs. altered dogs.).

3. Seizure bond is FLAT-OUT illegal and unconstitutional. This practice constitutes unlawful taking of personal property. If, after search warrant is obtained, a person is arrested and their dogs are seized, their dogs must be held AS IS (cannot be sterilized while held, cannot be sold, "transferred" or euthanized) unless the owner is found guilty after trial. Meantime, owner DOES NOT have to pay a dime for their care, until/unless they are found guilty of the charges.

It's a media conspiracy!...The vast majority of these "Pit Bull" maulings are really from Mountain Lions and Tigers. The government, the media and the HSUS are all in collusion!

thanks marty for posting the ruling,on the anmaiml and propety ownership.

ps. i guess cravens deisre coulnd not find my house.ther foot is not in my ass,and my knuckles arestill not skent,please i will pay for your gas craven desire if you get the balls up to come to my house..we know that will never happen
Joe w