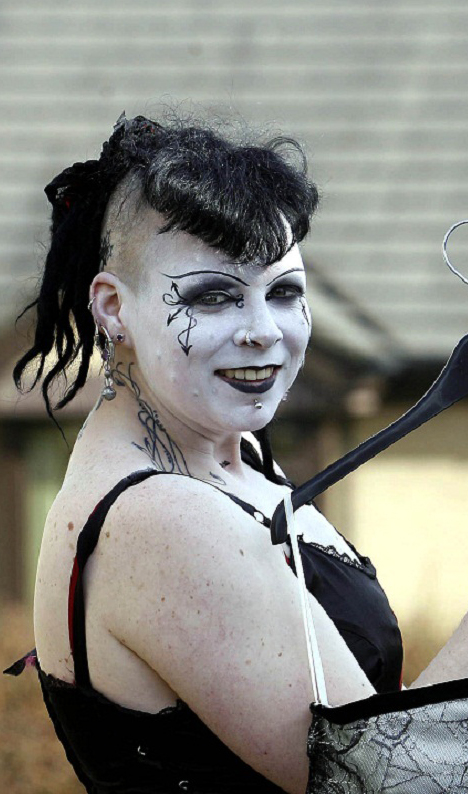 A teenage girl broke down in tears as she told a courtroom how she and her beloved pet spaniel were attacked by dogs in a park.
Lucinda McGrath, 16, said she had suffered from “constant flashbacks” of the attack, which left her springer spaniel Ted so badly injured he had to be put down.

I know it sounds mean, but just one look at Clare Breen makes me think we should be kind and put her out of her misery. I mean, the misery of being her.

"Nanny Dogs"...Should anyone who repeats this lie get Mauled?!?

This compilation is getting so long, it will wrap all the way around the Earth soon...

*Disclaimer..You Can't make this Stuff Up!

I simply have no words to describe Breen's ugliness, both inside and out.

where are the wooden stakes and silver bullets when you need them?

"Nanny Dogs"...Should anyone who repeats this lie get Mauled?!?

I alway used to wonder why someone would take a gun to a court trial an shoot someone likely to be found guilty anyway. This fuckwit has educated me.

btw, good job on the title snack. the title of this blog seems to escape the feeble little minds of nutters. maybe this will help drive it home. maybe not.


who to believe eh ? the victim or the freakish defendant. "it wasnt my dog " is so lame but commonly used by those who would slither rather than own up to what theyve done .

fuck , i hate these people ..... to see their dogs kill someones innocent pet and not to ashamed and contrite .

exactly snarky. They do not care. They may be too stupid to care. cuz they're fuckwits.

Dawn, the meaning of this blog has always been crystal clear to me and seemed incredibly appropriate here. I will never forget Tia Torres' musings on what the blog name could POSSIBLY mean...Fuckwit

But i'm pretty sure they won't get it because they're too busy not judging a book by its cover and believing that the same fuckwit that shoves beads inside holes she makes in her own face - FOR FUN - will be a responsible anything.

Blog name seemed pretty obvious to me too.

I must lead a very sheltered life, I don't get the coat hanger this freak is holding in her armpit...

"where are the wooden stakes and silver bullets when you need them?" Yes, I need them for you!

Orangedog said:orangedog said...
"LOL, I'd love to read Tia's musings. They must be "profound". ;)"

I don't do facebook but am able to see this page-not so much musing by Tia but a lot from her followers.

I don't see Claire Breen caring about the victims of her pit bull killing someone's pet. Is it just me?

I also don't see the point of so many piercings, shaved eyebrows only to be replaced by clown white makeup and freakish black eye makeup. Add in that she owns a pit bull dog and well, I'm not one to usually judge based on appearance, but in this instance, I'm judging her and her pit bulls.

Now I read that Claire Breen is denying it's even her pit bull dog. Pit bull advocacy is an ugly thing.

"Breen, 31, of Malsis Crescent, Keighley, denies being the owner of a dog which caused injury while dangerously out of control."

What does Claire Breen do for a living? Has she ever held a job? (Would YOU hire her?)

As pit pushers, the commercial didn't have any pits. The closest thing to the pit bull fighting dog was an old Labrador Retriever.

They will never have any of my money or time.

clare breen is regular income for some lucky psychologist. she's a burden to society.

I've known a few people that make themselves up to look like Clare, and none of them were wrapped very tight.

I haven't read the linked article but will next.

Are those spider legs coming off her garment? April 29 mentioned it as a hanger, but no matter how I squint and strain, I can't figure it out or see a hanger.

Ok, full sized pic at linked article showed me what it is.

I don't think I can be blamed for thinking she might have spider legs though ;)

Although I really liked the movie Edward Scissorhands, who knew there was a real live Mistress Pittyhands walking about in real life. Cocker Spaniels and Poodles watch out, her dogs are eager to give hair cuts, and they just get carried away! Damned D.N.A.!

A real life Mistress Pittyhands would have several missing fingers that had passed through one of her pit's digestive tracts ;)

I was thinking of calling her etch-a-sketch-face.

i liked your comparison to edward scissorhanz although there was no harm in him . course the old man could have created an evil friend for edward in the putrid form of claire pitty full.

When I first saw her photo I thought she resembled "Pinhead" from the Hellraiser movies.


course thats what its all about .

theyre never gonna be beautifull so they go the other way , shockingly hideous so people will stare. freaks .
and pittie fits right in with this dysfunctionality .

someday they will be old and pathetically stuck in their youthfull stupidity .

i think that she looks like the zombie bride of frankenstein.

i can't wrap my brain around why anyone would CHOOSE to look like this, so i will go with snarky's assessment:

"theyre never gonna be beautifull so they go the other way , shockingly hideous so people will stare. freaks .
and pittie fits right in with this dysfunctionality ."

this thing actually had parents and is a parent!

I tried to google

skunk sitting on etch a sketch

cat sitting on etch a sketch

I really needed to see a furry mammal near an etch a sketch in order to confirm my suspicions here.

Why does she not form a Round Table with her company of convicts, a salon, a symposium of philosophical enquiry? It seems like a terrible waste...