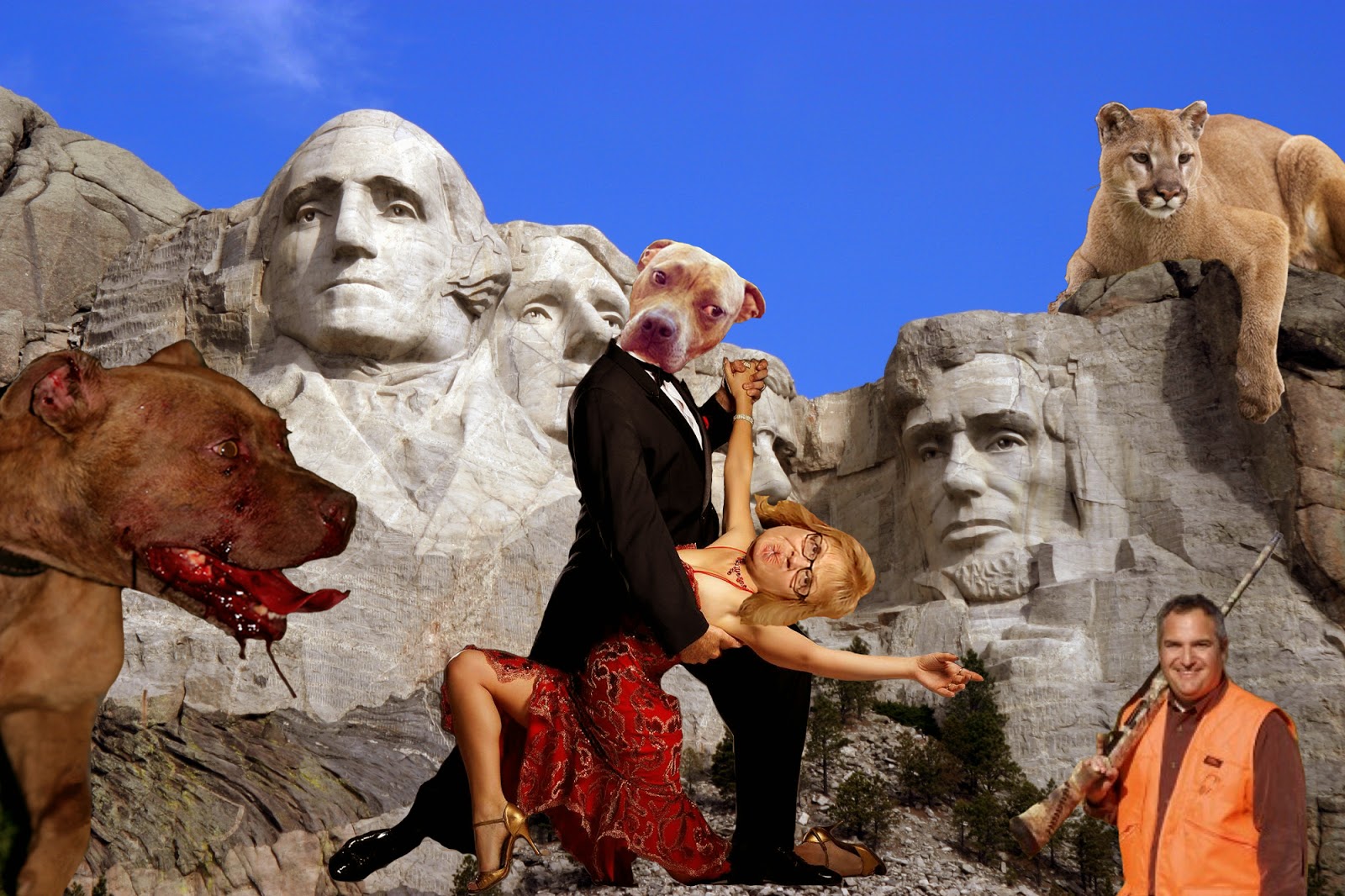 on friday march 14th, governor daaugard officially made south dakota the 18th state to prohibit breed specific legislation. now south dakota can get down to the serious business of looking into finding real solutions to aggressive dogs. or so they say. i doubt that any committees have been formed or funds dedicated to the problem. in actuality, everyone smiled and pat each other on the back for a job well done and went home. the subject of dangerous dogs will never be uttered in the state capital again. well, maybe after a fatality or a particularly gruesome mauling.


a glimpse into DAN'S political agenda:

* yes vote on a bill to force women seeking an abortion to seek counseling first and wait 72 hours before making any decisions about HER OWN BODY. oh and by the way, weekends and holidays do NOT count in the 72 hours.
any woman who would conspire with this cracker is a traitor to her gender.

* no vote on a bill to prohibit texting while driving, despite the fact that statistics show it is MORE dangerous than driving under the influence.

* no vote on smoking bans.


next up utah and missouri.

I don't know why it is so illogical to look first at known aggressive breeds when trying to determine which dogs might be dangerous. Yes, I know there are four pound dogs that think they are big and tough, but they remain four pound dogs with tiny little teeth. No one is worried about THOSE dogs. People are worried about the dogs that can jump up and eat their faces. Literally. Or knock them down and leisurely maul them over 20 minutes or so. That is what people want to see taken care of.. and there are only certain dogs that are even capable of such feats.

That makes me want to cry. I thought S Dakotans had more common sense than that.

South Dakota was also the last US state to make pet abuse a felony.

The nutters have two angles to work, as has been pointed out by many before me.

Of course they also have the common love of dogs, in general, to use also.

Throw out some mis-framing and trumped up numbers while in a smart business suit with a few, hand picked pit ambassa-dogs...and there you go.

What's up with Ledy's face?

It looks like Ledy's mouth has been sewn shut? Or a rectum photoshopped in place? Not sure. Craven, what IS that?!

"oh and by the way, weekends and holidays do NOT count in the 72 hours."

Decisions of such importance can only be made during banker's hours.

"It looks like Ledy's mouth has been sewn shut? Or a rectum photoshopped in place? Not sure. Craven, what IS that?! "

it's whatever you want it to be. lol.

i found a photo of rick santorum with a butthole for a mouth and decided ledy could use one too. in fact, i took rick's.

To my eye, she definitely has a butthole mouth that has also been sewn shut.

Somewhat unrelated but get a load of this. Notice that this Suzie Stringer-Baker nutter thinks that every comment pertains to them?Talk about a nut job! Original article here.

The letter the people are commenting on and the comments the nutter is replying to are rather mild. Yet, she insults people by calling them stupid, claiming they're "in a cult", and randomly telling a woman to "get off the pole". This over the top attack style should let people know what some of the advocates for these dogs are all about. Maybe people will start to wonder why anyone needs to defend a dog this way.

The letter is a person expressing concern about a few specific dogs that live near her father. Let's say the person rudely commenting has well-behaved pit bulls (which.. well...); what does that have to do with the ill-behaved pit bulls that have killed a few dogs and are scaring people in near the letter writer's father's house?

I would think the conservatives and the libertarians would be MORE concerned about ceding local control to the EVIL STATE, then they would be about owning a pit bull. This bars locals from making their own laws, with is supposed to be a critical principle in these groups (though conservatives lost any semblance of sanity a decade ago, but still…)

Also- ALL pit owners are responsible and have well behaved dogs, ala "Well, that's the news from Lake Wobegon, where all the women are strong, all the men are good looking, and all the children are above average." They are WONDERFUl , they maulers are SAFE.

I have NO IDEA where these responsible people and their dogs are, because I sure as f do not ever run into them, or met them IRL, or live by them. The last owner that told me how sweet his mauler was and what a great owner he was, said that right before his dog went pit bull on another dog. CLASSY.

I think that so called responsible owners defend the bad ones because they know FULL WELL that they have made similar mistakes, and their mauler has been aggressive in the past too. They only talk about this stuff amongst themselves, BTW, but I promise most pit owners have had a run in themselves with their own maulers.
.