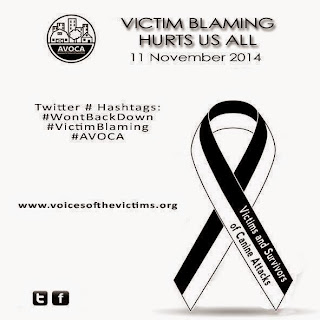 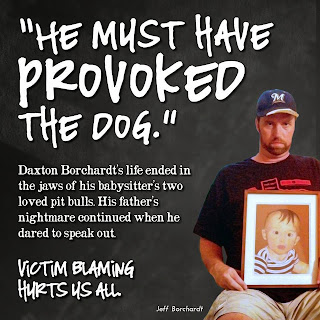 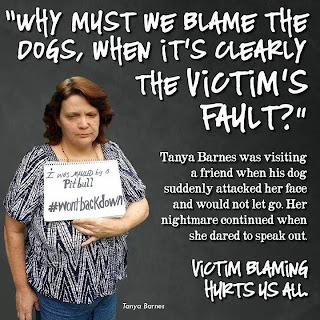 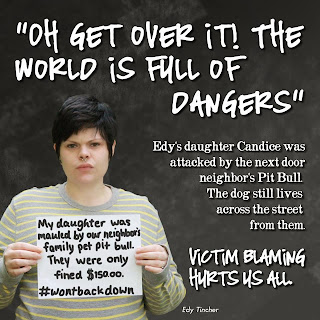 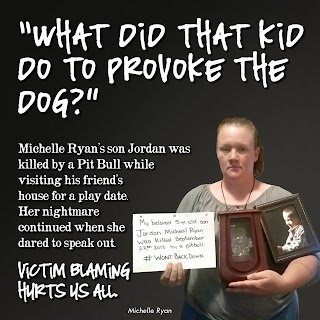 "Victim blaming hurts us all"-and it does NOTHING to solve the breed specific problem of pit bulls being the ONLY breed that ROUTINELY mauls and kills people and pets.

Victim blaming should be illegal. Along with pit bulls. Along with going on websites about stories of a vicious attack, and talking about how great your pit bull is. Like that's going to help?

There are so many things nutters do that goes against common decency. As soon as their pit bulls hurt something, the first thing they want to do is run away. If they don't make a clean get away, they make sure their pit bull does by sending it to a different location, so it can live to maul another day.

Everything nutters do, is appalling. Heck, I'm appalled that Illinois does not allow BSL. Why is that? Because nutters made it so. Not to anyone's benefit. Not even their beloved pit bulls. My right to decide was taken away. Sort of like having my hands tied. So I'm forced to defend myself instead. Great!

"Why is that? Because nutters made it so. Not to anyone's benefit. Not even their beloved pit bulls. My right to decide was taken away. Sort of like having my hands tied. So I'm forced to defend myself instead. Great!"

Many of the antiBSL laws were put in place long before nutterdom. They were snuck in there by breeders, particularly the AKC which made antiBSL lobbying a cornerstone of their legislative lobbying and used connected politicians and veterinarians in various states to force it onto the heads of citizens (in backroom deals) who didn't even know what the hell was going on.

The AKC saw the writing on the wall and saw that attacks and injuries by some breeds being pushed were increasing, and they did the antiBSL thing as preemptive strikes.

Strangely enough but not surprising, it is these same breeders that are always moaning about their rights and that no one should interfere with their rights. What that means to them is that they feel they should be able to do anything they want and hurt everyone else and take away everybody else's rights.

Even the more recent seeming nutters that were sneaky and sleazed in more recent antiBSL (like Amy Marder in Massachusetts in the fraudulent animal control bill she and her friends got in in the middle of the night before a holiday so no one knew) are breeders hiding behind the nutter clubs. Amy is AKC.

Best Friends that is pushing for antiBSL is breeder to the heart now.

Has anyone else seen "The Following" on tv; about a serial killer who unites a who lot of other psychopaths around the country via the internet? Is it just me or does this seem like pit advocacy? Except they're not taking orders from ONE person they 'know what to do' and act independently vicious.


im sure that all kinds of victims or families of victims are vilified by the perpetrators and sometimes their families . the fact that they are charged or even proven guilty does not stop this type of person from claiming innocence or justification for their misdeeds .

Blaming victims doesn't work for humans, why does it keep working for dogs? Also, why do so many other types of dogs get blamed? "Little dogs bite more". That may be true, especially when they are truly startled or stepped on, but the bite usually doesn't require more than peroxide and a Band-Aid. "Boxer mix/lab mix mauls child in unprovoked attack". Not very likely, I've seen both labs and boxers hyper enough, usually without the proper training, or still young puppies who jump. They can scratch, and yes they could bite, most likely during a game of fetch, where it would be them going after the ball and getting someone's hand. Still, even if that requires some stitches, it wouldn't automatically be vicious. Is the goal to destroy good dogs names, and only have fighting breed dogs around?

These people are truly brave. To have gone through all that they did from the dog attack itself and then put themselves out there to be attacked again by the pit pushers... I have much respect for them and applaud them.

Someday our society will collectively GROW UP and realize these people are heroes.

I cried watching that video. It is so sad.

I went to Petco over the weekend. While there, I noticed a stoner/hippie couple hanging around outside the grooming room. Woven wool hoodies, white-people dreads, Rasta colors, piercings, the whole bit. I thought to myself, "If they have a dog here, I'll bet I know exactly what kind of dog they have."

Well, a you-know-what came bursting out the room when the groomer opened the door. I stepped behind a display rack so I could watch without being in its direct line of sight. Because there was a dog event going on, several people were standing around in line with normal dogs (Corgi, collie, CKC spaniel, etc.) and the skinny guy was having to hang onto Pittie's flimsy-looking harness while it attempted to charge. Luckily, the floor's linoleum, so it was pretty much just running in place.

The couple drag their pet outside onto the sidewalk and I continue to watch through the glass doors. This is in a strip mall so there are always lots of people walking around, and at that moment two kids go running by on the sidewalk in front of the dog. It goes berserk all over again, and the guy has to wrestle it between his legs and holds it in the classic dogfighter pose before he finally manages to drag it back to their car.

Remember when hippies used to own predominately black labs and shaggy mutts?

Hey, easy on the hippies folks. I would consider myself a reformed hippie, and a pit would be the last dog I would have.I have Siberian Huskies, and they are also in the top 10 for killing humans, and cats, and small creatures. Mine are never loose, in a fenced in yard, and never used to threaten, but you should see the kids lone up at school to pet them. I guess my point is just because they look a certain way, doesn't mean anything. I work with some nutters, and they are country folk you would see at a square dance. Most "hippies" wouldn't own a pit for the simple reason that it is too much work. The stock driving neighbor has 2 aggressive pits, and he works for the state. Thanks Dawn for standing up for everyone who is shamed into silence.

Now I am going back to listening to some pink floyd, and playing with my devil sticks. Peace out....;p