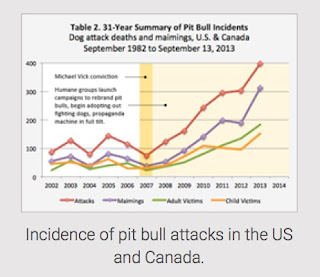 The National Pit Bull Victim Awareness Day website lists more than 50 organizations and advocacy groups from across the continent whose purpose is to alert the public to the pit bull crisis.
Posted by scurrilous amateur blogger at 10/14/2015

Yes, but October is PIT BULL AWARENESS MONTH. Do the math... the pit nuts have it 31 times better! You have a day, they have the whole month!

Coming to a neighborhood near you:

Yes, this is definitely a "thing" I've observed on social media. Let that sink in.

I have no idea why the pit nutters might think guns are more dangerous than dogs.

Of COURSE they want weapons control.... unless that weapon is a DOG, then it is all good! They want to continue to threaten, harass, injure and KILL with impunity! Simple possession isn't good enough for them, they want to KILL with their pit bull dogs!

You see, we can't have anyone interfering with dear FIDO when he is on a killing spree! That would just be wrong, you see.

thank you anon 2:42 for taking time out from your busy day to beautifully illustrate the pit nutter paradox.

I have no idea why the pit nutters might think guns are more dangerous than dogs."

that is what is known as a false equivalence. you can educate yourself about this logical fallacy HERE.

but let's parse out your ridiculous comparison.

first of all, 33,000 deaths by firearms includes homicides, suicides, self-defense, police shootings and accidents. about a third of the 33,000 are homicides, which i suspect is the definition that your puny little brain was aiming for.

third, each year approximately 36 children die when they are left in a hot car. does the fact that 589,000 people die from cancer each year make the lives of those 36 children any less significant?

do society a favor. trade your mutant in for a beagle before you hurt someone.

Your logic is flawed.

"I have no idea why the pit nutters might think guns are more dangerous than dogs."

Guns are not more dangerous than dogs. Here, let me fix this for you.

"I have no idea why the pit nutters might think guns are more dangerous than pit bulls."

People said for a while that when Nathan Winograd and Douglas Anthony Cooper started getting a soapbox on Huffington Post to stand on and rant and lobby for pit bulls and No Kill, that they were representing pit bull breeders and breeders in general.

On DDB FB "Today the HuffPo launched an attack on PETA, who supports pit bull spay/neuter and anti-chaining legislation"

Who in their right mind would say they loved pit bulls but wanted to support pit bull breeders and dog fighters killing through their massive over breeding? Or supported chaining them to torture them outside?

THE BREEDERS, THAT'S WHO!


Huffington Post is just a lobbying arm for the dog fighters and breeders to let them prey on pit bulls plus everyone else, hiding under the disguise of "pit bull advocacy" to dupe the idiots

Pit bulls = loaded guns in the hands of idiots.

pit bulls are really nothing like guns. pit bulls are closer to highly unstable volatile compounds like nitroglycerin.

Pit bulls killed another poor soul. But it's okay, because 40 million people died in auto accidents, or some shit.

Not sure everyone's stance on Boxers.....
But Pits don't even have to sink their teeth into anybody to kill something. A friend on FB shared this on her feed (bolding my doing):

On Sunday 1-3-16 I was getting ready for On Sunday 1-3-16 I was getting ready for church and I got a phone call that my two boxers got out of my yard. The lady said they were at her house. I took off running out the door and told my husband the dogs had gotten out of the yard. So I ran down the street and around the corner.
That's where I seen my male dog Cope dead on the side of the road. I dropped to my knees in the street screaming and crying as a man approached me saying he shot your dogs and a woman came running up to me to hold me as I was crying. My husband was 2 steps behind me where he started to confront the other guy walking up to us to apologizing. Saying "I didn't know they were your dogs" "I thought they were pit bulls." Someone hollered my name saying my female dog Penny is still alive. Sheriff cars came from both directions of the street.
The sheriffs made us take penny to the emergency vet 35 minutes away to have her checked out. They wouldn't let my husband put her out of her misery. She had a hole from a shotgun close range on her hind end. We arrived at the hospital with poor fading and in a lot of pain Penny. They let our family say goodbye. Before they euthanized her. We drove back to the murder scene. Spoke to the sheriffs and they said that they felt that "he" the shooter was not justified in shooting our babies! He could have used a water hose or a stick anything but a 20 gauge shotgun. The story the shooter gave was our dogs were in a dog fight with his yorkie yet no one has seen this other dog.
Honestly if two full grown boxers were in a fight with a yorkie the yorkie would be mangled, broken bones, internal bleeding, etc. they never showed this dog nor took a dog to the vet. The lady across the street and 2 houses over said our dogs were playing with her Pomeranians before heading down the street. She said they were not aggressive towards her dogs.
The shooter shot Cope at a close range with a 20 gauge shotgun. Penny was scare and took off running away. Then he chased penny down and shot her in the hip.

Just a side note:
Where the shooter lives my brother had lived there before. Across the street from the shooter is where my parents had lived. We used to walk our dogs down there weekly. So my dogs didn't know that grandma and grandpa had moved away and no other family members lived on that block. The dogs would stay there with my parents when we would be out of town.

The shooter did not get arrested. He didn't get his shotgun taken away. He didn't even get a fine! He fired two rounds in a residential area. And Murdered our Cope & Penny!

I wonder if the shooter had previous experience with pits. Personally, I'd do the same as the shooter. Boxers look like a pit from behind. A second's hesitation could mean the life of your or your loved one.

You know, it's a war out here. It's been pretty one-sided with the pits slaughtering us like sheep. Now people are getting wise and taking action.

actually, i don't find purebred boxers look much like pits but it really doesn't matter if they were pits, rotts, boxers, labs or collies. they were off of their property and not under the control of the idiot that owns them and the shooter said they were acting aggressively towards his yorkies. i would have shot them too. the moral of the story here is: boxer owners can suffer the same critical thinking deficits as pit bull owners. these fucking idiots are now on facebook trying to tar and feather the shooter who had every fucking right to kill those dogs. i hate people sometimes.