back by popular demand 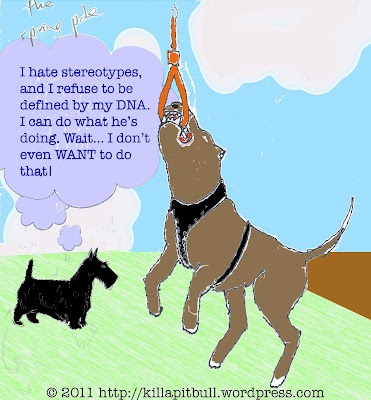 Imma hang a tire from my tree so my normal dog can hang on it for hours. I gotta get a harness, and a chain dog collar, a tutu, a break stick, a dog house, a shock collar, and what am I forgetting? Oh, I know! A massive chip on my shoulder to match my ego stroking dog that will intimidate my whole neighborhood. If you even think about coming on my property, you will have to take on my dog. Better watch out!

killabull makes a lot more sense , than " respectabull"....the former is just self-defense and i dont know what the latter means unless it means you better have some fear ( of both pitbulls and their owners) , but thats not really respect . crossing the street to avoid your nice dog getting ripped up by some idiots ugly pit dawg is not exactly my idea of respect .

All terriers do the hanging thing. They're all shit dogs.

Witnessed a small terrier (jack russel or similar) almost kill someone's pet cat despite kicking the dog, screaming at it and getting in between, very disturbing - stupid dog had no respect for human authority... tried to bite. When the owner got there she showed no compassion whatsoever for the bleeding gasping cat and asked "what do you want me to do about it?"

how about don't let your shitty little aggressive dog off leash!? If it cannot be trained not to kill other people's pets it should not be loose!

The American pit bulldog is the greatest breed this planet has ever seen. Long may they reign king of the dogs.