the saga of daniel coverston and his frankenmaulers continues 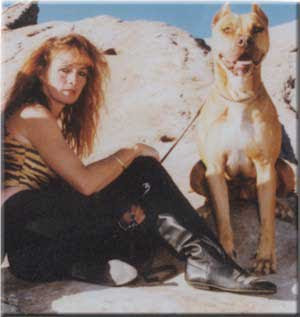 auburn, california wife of a felon, wannabe brothel madam and pit bull "expert" tia torres evaluated coverston's 4 pit bulls. one of the dogs bit her hand when she tried to leash him. torres said, "the dog became frantic and it looked like he was going to bite another person. he continued to snap at torres as they put him back in the kennel. the other dogs, sherman and ronin became extremely aggressive acting, hitting the gates and barking hysterically." torres ended the evaluation. torres feels otis is a good candidate for her felon program and offered to take him for 2 months. (my vote is for sherman). meanwhile daniel coverston claims that he does not have the $12000 he has racked up in kennel fees and his family is trying to hold the city ransom, saying they will pay the fees, if and only if, otis is not euthanized. STEVEN and PATRICIA COVERSTON should be charged with GRAFT.
if you are interested, you can read the touching story of how tia met her tattoo artist, attempted cop killer prison pen pal soul mate aren marcus jackson here.
Posted by scurrilous amateur blogger at 1/26/2010

And Discovery Networks through Animal Planet is putting money in his pocket.

Married a cop killa and owns Tigers...just the type of judgement that should influence dog safety policy!

Apparently, the starstruck Judge has allowed Tia to take sweet human aggressive Otis. Odd, since there are 13,000 Pit Bulls euthanized annaully in the LA shelter system, some even without biting histories...but she had to drive all the way up to Auburn to get THIS ONE!

You people are so ignorant and judgemental. Let these people go about their lives and you go about yours. Some people have nothing better to do than hate on what others are doing. Mind your own business! And who cares if Aren is Aryan brotherhood. .good for him! White people should be proud to be these days. These people are actually doing good things for the animal and human communities. .what have you done for either?

On Sept. 16 the pitbulls reportedly approached 17-year-old Weimar resident Joseph “JoJo” Kerschner while he was walking to a Downtown Auburn restaurant. Kerschner had just parked his car in a parking lot on 894 Lincoln Way in Downtown. According to reports that Ruffcorn read aloud, Kerschner told police that one of the dogs, a larger, white dog, first growled at Kerschner then the other dogs followed. When the white dog attacked, so did the others. Two witnesses –Wade Andrews and April O’Dell – rescued Kerschner but not before the teen received more than 20 puncture wounds and bites to his body, including a bite to his ankle that exposed bone. He now has more than 30 stitches in his body and has one of his arms and legs are bandaged. While reading the reports, Ruffcorn said that Coverston was in Michigan when the attack occurred.

as funny as your heroin story is, it doesn't jive with the facts.

I'm hoping that my posts are actually put on the blog

scurrilous although the facts you display are basic because they are the same facts from all the information to the public but I will say once again I went to school with him and he could not identify the dogs. coverston owned six dogs all pits one being nearly over 100 pounds all were trained and would have killed the kid and would have taken a gun to stop if they were to have attacked anyone, I have meet the dogs being they were at the school a couple times in which they were very well behaved and just the large dog alone would have taken more than a guy with a wrench to calm it down and if my other posts had been put up you would have a much better outlook on who the kid really was and maybe still is

your comment was not denied. it simply does not exist in the either the spam folder or in the waiting to be published folder. it is not uncommon for blogger to eat comments. it is also not uncommon for defenders of pit bulls to lie.

fyi, i love your comment about how daniel coverston has no qualms about taking dogs "that would have taken a gun to stop" to a school. what a fucking lunatic. you are as nuts as he is.

Your comments seem to be simple minded and that's ok its hard to have a solid understanding when you don't know the people involved on both sides but like I said I went to school with him and he would actually go around bragging to his friends about basically the exact thing that was mentioned he was breaking into the neighbors and stealing stuff. And the comment about needing a gun to put it down it's an example of how big the dog was not the fact it was mean you shouldn't get so mad because like I said I actually know everyone involved, do you? And I know people just want to believe he was an innocent person and that the dogs were killer's but it is the exact opposite it's just sad it went as far as it did and by the way they bites weren't that bad after seeing them in person even he was laughing about it saying he was going to get paid. I have had worse cuts from riding a bike.

"And the comment about needing a gun to put it down it's an example of how big the dog was not the fact it was mean you shouldn't get so mad because like I said I actually know everyone involved, do you?"

sounds like you are back peddling. and no, i do not know everyone or anyone involved and for all i know, NEITHER DO YOU. i am guessing that if you did have first hand knowledge, you would know that tia torres evaluated them and coverston's mutants did not fair well.
http://cravendesires.blogspot.com/2010/12/tia-torres-new-best-friend-otis.html

six mutants huh? according to the zoning laws, the max is four.

try to follow along. i said "for all i know, neither do you."

i am simply stating that i don't know who you are or what you know.

My apologies then I misunderstood