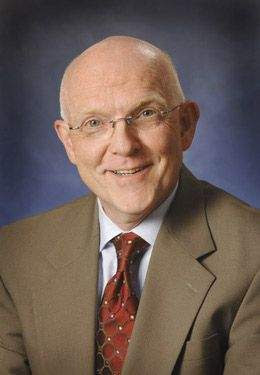 63 yr old ED SCHOCK, elgin mayor
elgin, illinois
last night the mayor and his german shepherd Rako were out for their nightly neighborhood stroll when 2 ugly mutant frankenmaulers launched themselves off of their porch and into attack mode. the old guy, who opposed the breed specific language that was being debated amongst the city council members just a few months ago, managed to fight them off and escape injury. the mayor kicked one dog and hit the other with the leash. the pit nutter, who unfortunately has not been named, had the shameless audacity to yell at the mayor for kicking and hitting her dogs. welcome to the world of pit nutters mister mayor! the mayor said that since neither he nor his dog were harmed, he wouldn't have called the police but in classic narcissistic pit nutter style, she had to shoot her mouth off, you know, cuz in the world of pit nutters, they are all that matters. ms pit nutter claims that only one dog ran off of the porch and barked at the mayor and was never closer than 5 ft. she has received a total of 5 citations: dangerous dog, biting/attacking, no collars or tags and dogs at large. ms pit nutter goes to court july 27. i would LOVE to be there! anyone in the area? please attend if you can and get photos!!!
the mayor says he has no intention of targeting pit bulls. "It could have been any breed of dog."
yep could have been a pug or a poodle or dalmatian.
and speaking of pugs, poodles and dalmatians.... 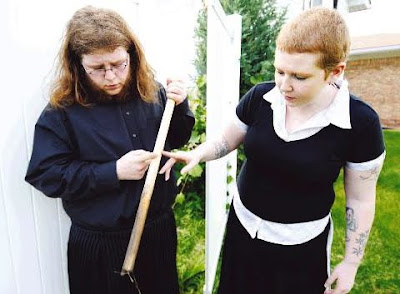 JUSTIN BAKER and KADIE RUSSELL present their conspiracy theory to the news reporter. this is the stick that they hammered into the ground and wedged against the gate to contain their frankenmaulers. these two are really fucking clueless.
sterling heights, michigan on june 1, the four ugly mutant frankenmaulers owned by JUSTIN BAKER and KADIE RUSSELL, SOMEHOW escaped their back yard fortress and attacked a man riding a bike. he was very lucky that it occurred on a busy road and people stopped to help him. first JUSTIN BAKER stated that he has talked to witnesses who say that his four unlicensed dogs were scared and provoked by someone. and that someone must have let them out of the yard. JUSTIN'S tattoo covered babe, KADIE RUSSELL says “If this would have been four pugs, or four poodles, or four Dalmatians, it wouldn’t have even been an issue.”
BINGO! you're right, it would not have been an issue because it would NOT have occurred!
but these two pit nutters continue to make excuses and deny the high prey drive nature of their dogs coupled with their own ignorance of pit dogs. 'they're just puppies' 'i love them like they're my children' 'we have parties and they've never violent before' 'our pit nutter vet wrote a letter stating they are not aggressive' (YES, they are!) 'a drunk man was seen taunting them' (i want to see this witness testify under oath) and when that doesn't sway their audience, KADIE attempts to evoke sympathy by pointing out that she just went through surgery and chemo for a tumor (boo fucking hoo). obtw, JUSTIN and KADIE have multiple BEWARE OF DOG signs on the property.
here are JUSTIN and KADIE proudly giving a tour of their fortress like property (sticks, chicken wire, rocks and bricks) that SOMEONE else must have breached because their children would never do this on their own and without provocation.
their PUPPIES are in jail awaiting the judge's decision on whether or not to dirt nap them.
which one of these ugly mutant frankenmaulers do you think is named POOPSTAIN? 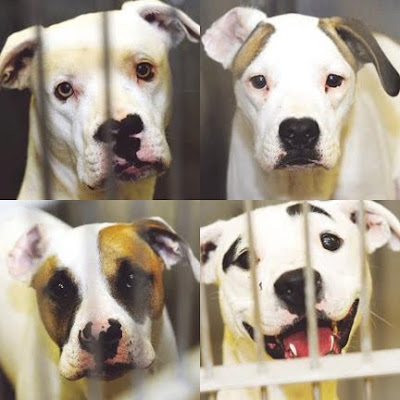 UPDATE the above frankenmaulers were euthanized today!!!
Russell pleaded no contest to four counts of harboring a vicious animal. she was ordered to stay out of trouble for 12 months to avoid a 2 month jail sentence. she cannot own any "bully"-type dogs, and must pay $2,400 to the city and county for court and shelter fees. if the case had gone to trial and she had been convicted, she could have done 93 days in jail and paid higher fines. she chose to deal with her cancer and chemo instead.
Posted by scurrilous amateur blogger at 6/25/2010

This senior citizen mayor could easily have been killed. Think if this had been a child.

Perhaps now the Mayor will have sympathy for the victims of pit bulls, and stop lobbying for dog fighters and tax cheat pit bull breeders.

That any supposedly educated man in a position of leadership could have been tricked and enticed into helping dog fighters and breeders is reprehensible.

Bagheera, did you post about a veterinarian on a morning TV show that was promoting pit bulls? Was this Marty Becker?

The TV show is not revealing his for-profit breeder interests that lie behind his pit bull promotion, if he was the vet.

I hope idiots like the ones posted below continue to run the breed into the ground. They will never go away in their true form, but out of the hands of the public is the best thing that could happen to these dogs. Too many cunt soccer moms and moronic owners think these dogs are harmless when they are not. I've seen them handled, raised, and contained properly, but your average Joe has no idea what they are capable of or the measures needed to ensure the dogs safety and that of any animal around them.

Keep it up, dumb fucks!

Such was the case last week for owner Silvia Lugo. She was fined $2,200 after her two pit bulls were declared to be dangerous by an administrative court for attacking Elgin Mayor Ed Schock and his German shepherd while they were walking by her home in the 200 block of Plum Street on June 24. She must also have her dogs muzzled and microchipped, and obtain liability insurance of at least $100,000.

Whoever made this is dumb AS FUCK! A pit bull is like any other pet you ignorant son of a bitch. It's not the breed, it's how you raise the dog. Any dog has the ability to be "vicious." Keep on talking shit about the breed. Keep bashing 'em. One day I hope one of these "vicious" dogs rips your fucking face off. You deserve it, cunt.