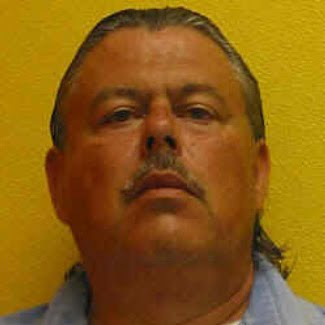 Pit bull owner JEFFREY MANN used his dog to kill his girl friend on September 2, 1992. At the age of 36, MANN made history by becoming the first person to be convicted of murder using his dog as a weapon. A Cuyahoga County Ohio jury found MANN guilty of instructing MACK to deliver 70+ bites to 28 yr old Angela Kaplan. She bled out in the living room while MANN slept. Mann and Kaplan were in a custody battle over their 2 daughters. It was later discovered that MANN molested the oldest and three of her friends while under the care and custody of MANN'S parents.

MANN currently resides at 2500 Avon Belden Road in Grafton, Ohio. He has been consuming oxygen at that location since 11.24.93. My hope is that he draws his breath there, as do 1300 others, and soon.

The Grafton Ohio Correctional Facility is NOT a particularly bad looking place. This disgusting creep does not deserve the pleasant, farm prison.

Impossible!...Pits are not human aggressive, therefore this Pittie could not possibly maul this mother to death so Mann could get access to the children for sex.

This contains incorrect information. Mann was not accused of sexual molesting children. Angela Kaplin was in a custody battle with her exhusband Howard Kaplin who is now serving life for, among other crimes, child molestation. He is the person who molsted his own child and the other children. Get your facts right before posting crap on the internet.

The fatal quarrel occurred as Kaplan was attempting to regain custody of her two daughters, now ages 10 and 6, from their paternal grandparents, who had Kaplan declared an unfit mother in the spring of 1992. Shortly after the murder, investigators learned the girls' father had sexually abused the older girl and three of her friends while they were in care of the grandparents. The father has been convicted of the crimes; charges of neglect are pending against the grandparents for allegedly letting the abuse happen; and the children are in foster care.

this is really disturbing. can just anyone say anything and have lies posted online? i guess so, because the jeff mann i know loved and protected those girls and was standing by his GIRLFRIEND angie to help her get the kids from her ex HUSBAND who was ultimately charged with 39 counts of molestation. his name is howard kaplan, and he's serving a life sentence in michigan. jeff mann is a good guy who's dog bit 90 pound Angie on her elbows while she was having a epileptic seizure, and she bled to death with jeff unaware. he has given 20 years of his life in prison for the pit bull media hype. and now you recklessly add child molestation? how dare you, with only half the facts. the right thing to do would be to take this posting away, apologize, [you have jeff's address]...and pray someone doesn't spread vicious hurtful lies about you or your loved ones. there are still many of us out here who love him and bothered to learn the truth.

please provide a link. what you are saying contradicts what i found on line. i will happily print a retraction.

What a laugh, Rachel. Were YOU in the courtroom? Biting on the elbow will RARELY have a person bleed out. Mann, held her up, arms out and commanded the dog to attack her. I was in that courtroom. I saw her bloodied clothes that Mann tried to hide. The dog stripped out a main vessel which led to her bleeding out. I think YOU should be the one to get your facts straight.

Hey guess what! Jeff Mann was a horrible person! He killed my mother IN COLD BLOOD. He held her down and watched as his dog mauled her. Then watched her bleed out as he cleaned his precious pit and came up with a story. He murdered her! No way around that and you're delusional if u think other wise. F it were up to me and my sister, he would have fried for what he did! How dare you sit here and say how wonderful this man was. Let me guess, you're one of his flavors of the month? His little sidekick? Gets your facts straight before you start backing up people that don't deserve it.

How do you know this info?? This is Nicole Kaplan the eldest of Angela's daughters...thank you for providing the real facts of this case.

You are loved sister.
Keep your head up high no matter what happens in life.