Guest writer Branwyne brilliantly exposes the state of affairs of dog adoptions in the state of Massachusetts highlighting the mess the MSPCA has created there by their aggressive pit bull promotions. 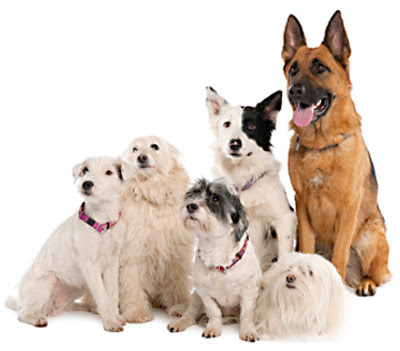 None of these dogs are being over bred and dumped in
shelters in MA according to new report by Branwyne
"A week before "Pit Bull Awareness Day", Lowell police were called to a home after the family's two pit bulls got into a violent fight and attacked the husband when he tried to break it up. The husband received 11 stitches in his leg. The two dogs were brother and sister, a year and a half old; an age when many pit bulls begin to mature and develop a level of dog aggression they hadn't exhibited as puppies. Both dogs were adopted out by the MSPCA six months prior to this incident. The owners signed the dogs over to animal control to be euthanized, because the injuries they sustained in the fight were so severe, they could not afford the vet bills to treat them. The MSPCA's continuation of the Pit Bull PR campaign guarantees that everyone loses: the pit bulls, who are prisoners of their genetic code; the MSPCA, whose reputation and credibility is irredeemably tarnished; and the animals who could have benefited from the resources spent cleaning up the mess created by pit bull owners and breeders."
Read here!
Posted by Small Survivors at 10/22/2011

Great article Branwyne. I enjoyed reading it. I've noticed the MSPCA was really pushing the grippers as well.

Anyone seen this spawn of NCRC?

Check out the cheesy 70s music, them asking for donations from the public, there lack of a list of experts and other qualifications, and their horrible science related to BSL. Puke.

Hmm - the site seems to be basically a flash ad, with more ads, and a "please donate" button at the bottom for good measure. Pretty much content-free, from what I can see.

Great article! My family is in the process of adopting a greyhound off the track. It's quite a process, and while not as expensive as buying from a breeder, it's not free or subsidized. It is absolutely outrageous that these pit bulls are being subsidized, I wonder if taxpayer dollars go towards this sham or if it's all donations. This makes my blood pressure go up! Ugh.

DubV, the putz that runs matrix research is scot e dowd phd, one of the highly educated nutters who touts the validity of the ATTS

dowd is a breeder of shit bulls and the owner of pit bull university.

pit bull U is the alma mater of the duquesne cop.

I was aware of matrix because I'm currently trying to remove the mention of ATTS stats from pit bull wiki pages. I'm in a few moderated disputes. A bit of an uphill battle, but it is a worthwhile way to spend a few minutes a day !?! You guys rock.

Dawn, your reference to pit bull univ. (puke) will be useful, thanks.

DubV - COOL! what you're doing!

i made copies of pit bull U owned by scot e dowd, phd, just in case it disappears. let me know if you need it. actually i have an entire dossier on dowd and his breeding operation. the doctor is a hog dogger.

here's another one of his sites, his begging for money page

and DubV, i second snack's sentiment "COOL! what you're doing!"


april 29, you've not heard of it because it flopped. there hasn't been any activity in ages. i am surprised it hasn't been removed.

obtw, i have looked for the internationally respected researcher 50 papers he supposedly authored. maybe you will have better luck finding them.

Thanks to all who responded...to fourshoes, I live in an area where rescued greyhounds are very common. In 25 years, I have never seen a greyhound off leash unattended, never heard of or seen a greyhound causing any sort of problem of any kind within my community. Greyhound rescues do a superb job screening dogs for adoption, and educating prospective owners regarding the SPECIFIC needs of sighthounds. Despite the fact that some ex-racers have a high prey-drive, and can chase and kill small animals,I have never known of any incident with a greyhound "getting loose" and killing a neighbors cat, etc. ALL the greyhound owners I have met understand that their dog can never be off leash in public, and they ALL understand how their dogs breed-specific behaviors.

I have never met an irresponsible greyhound owner...the greyhound community does a wonderful job with these dogs.

Sorry for the typo...meant to say they all understand how to manage their dogs breed specific behaviors.

@branwyne, the greyhound folks are lovely people. It seems every breed specific rescue is truly committed to adopting their animals out to the right homes, with the glaring exception of the pit bull advocates, the difference is pretty stark.

canineresearch.net is protected by Domains by Proxy: http://www.networksolutions.com/whois-search/canineresearch.net
Legitimate businesses do not HIDE their name under a proxy... nor do they use "music" in the background of their website. What a horrible joke. It's reminiscent of the American Canine Foundation. I imagine one of its members has its "paws" imprinted in it. The Internet Archives shows that the site was exactly the same in 2007. Guess the $$$ didn't roll in as anticipated... http://web.archive.org/web/20071015144523/http://canineresearch.net/

I'm wondering how I can help. Pit bulls are ruining life as we know it. One cannot safely walk down the street anymore much less walk their dog. We are seeing more and more attacks on people and animals. Horrible.

hi mary, i'm sorry but your comment landed in spam. sadly there is no easy answer to this problem. my best advice is to arm yourself, keep your children and grandchildren from visiting homes with these ugly dogs and let your feelings be known to your local law makers. i also think it is important to make a stink about any and all infractions, no matter how small, with your local law enforcement. insist on creating a documented paper trail whenever you encounter menacing dogs. too many times, people don't make these complaints about loose menacing dogs that cause minor or no injury and then the dogs go on to cause serious injury and it then that is regarded as a first strike!