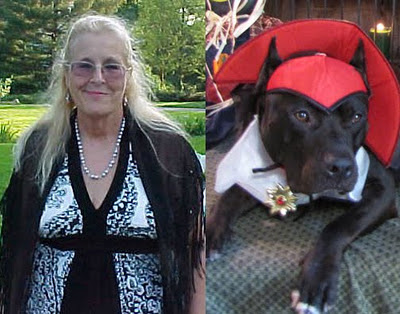 "They're born normal puppies. There are people who raise pit bulls who think to have a nasty dog is the thing. It's a macho idiot that owns a mean dog." Ruth Teeter

American Staffordshire advocate and breeder of UKC champions of Connecticut and Virgina, dressed her "gentle" dogs in costumes and pimped them out to fight against BSL for the Canine Defense Fund in New York. Words like reliable, trustworthy, playful, loyal and loving were used to describe the "pit bull" in July 1987 but by the time November rolled around the conversation turned to charges, fines, shootings and dead sheep. That's right, five months after Teeter managed to finagle a little positive press for her misunderstood wiggle butts, two of them SOMEHOW got loose and killed a ram.

Wow. You just can't make this stuff up!

Another Defeated Expert...If a champion Breeder like Ruth can't safely own Pits...Who Can?!?