for historical purposes only ;-) 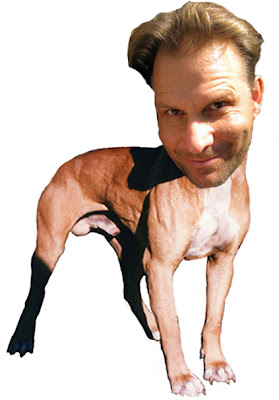 What to look for in a game dog by California Jack

Top or bottom, winning or losing, does your dog stay in holds? To me, one of the surest signs of gameness (or lack thereof) is whether (or not) the dog is a holding dog. If your dog is always in there with a hold somewhere, no matter how tough it is for him, the chances are he's a game one because he's still trying to win. But if your dog goes down and he lets go and starts to panic, and he seems more preoccupied with getting up than he is doing his job, the chances are he's a quitter.

Does your dog have a confident expression on his face; in other words does he look like he's enjoying what he's doing? No matter what's happening, your dog should always be intense and think he's winning. If your dog's eyes start to wander, or if he turns away from his opponent at some point, and/or starts hollering in pain, the chances are he's thinking about doing something else.

Is your dog's tail up and wagging, or is it dropped, limp, and/or fuzzing up at the back. You should hope that it's arched over his back (and/or wagging) or you are probably the owner of a cur.

Does he struggle in the corner to get back to his opponent, or does he just stand there content that he has been given a break? A good dog is upset that the action was stopped and wants nothing more than to return to it - he'll let you know it by the way he acts in the corner. But if your dog is in the corner and does nothing but stand there looking up at you, the chances are it's OK with him that you stopped things for awhile - which is not what you're looking for.

When he's tired and is turned back around to face his opponent, does he hold his head up and look down at his opponent - or does he hold his head down and look up at his opponent? A tired dog that lifts his head up generally is letting fatigue whip him and is concentrating on his breathing - and is therefore sure to quit to fatigue; by contrast, the tired dog that lowers his head and glares up at the dog is suppressing fatigue and is maintaining focus on the opponent - which is what you want.

Finally, how does your dog scratch? I reaalize that some very good dogs happen to be slow scratchers, but generally you want a dog that scratches HARD. Some hard scratchers have bashed their heads against the boards (in missing their ducking opponents) enough times where they adjust their style. They'll tippy toe half way (making sure that their opponent isn't going anywhere), and then they'll rocket across and really blast their opponent. Whatever the case, not only is hard scratching a very good indicator of a dog's gameness, but it can actually stop the opponent's dog when things get in the trenches. How would you like to be in a knock-down, drag-out fight with someone for an hour and still have your opponent screaming and struggling to get back at you, like nothing's ever happened? Well, if your dog's opponent has any cur in him, your dog's hard scratches tell him, "NOTHING YOU DO HAS ANY EFFECT ON ME!" Hard scratches have stopped many an opponent. 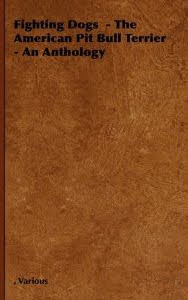 other fun, educational and historical chapters include "Treating Wounds" by POPEYE, "The Weigh In" by RUSHIN BILL and a real tear jerker "Saving a dog after the fight" by California Jack. so touching the lengths that Jack goes to save his pit fighters. you can't read this without a box of kleenex handy. don't even try.

KOERNER'S alter ego is PONCHO a descendent of man biter BOLIO. KOERNER moved from california to tennessee to florida and remade himself into a photographer. KOERNER states that he has a BA in philosophy with an emphasis on psychology, english and ETHICS!

KOERNER claims to be out of the pit breeding/selling circuit and now only sells florida nature calendars, fighting dog calendars and dog fighting books.

me thinks jack's brush with the law a few years ago might have something to do with his new and improved persona.

here are a few of the dogs JOHN KOERNER bred/sold.

SWITCHBLADE - pit fighter whose life was cut short when he was hit by a car.

LITTLE KIM - dead game, expired in holds and had to be pried off

the slavic dog fighters are especially savage.
for example, i found this photo on a ukranian dog fighter website. 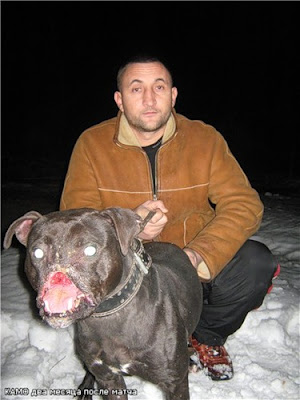 31st August 2007. A RIA NOvosti correspondent infiltrated a clandestine dog fighting network in the western Ukraine. Apparently, there are regularly scheduled tournaments held in the Ukraine, Russia and other neighbouring countries. International involvement was apparent, including from North America, in the breeding and training of the dogs, and the organization of the network of tournaments.

not sure i care too much what one game dogg does to another game dogg, excepts its stupid ,cruel and unnecessary but i guess its what they were born to do . at least if a game dogg is kept chained and contained so it never has a chance to do it's fucking thing to anything but another gamedogg or a gamedogger perhaps its ok , relatively speaking. at least its less of the bullshit you get from the idiot pitter / dingbat crowd who seem to think pits are regular dogs and ok to be out there in homes or out in the public.

Other ways to tell if your pit bull has gameness...

Is undeterred by gun shots other than well placed CNS hits.

Is unaffected by pepper spray and unrelenting after being tazed.

Continues attacking after strikes from rakes, hoes and shovels.

Spins away from handler's attempts to break the dog from his hold.

A game pit bull is every psychopath's dream come true!

i hear its ignorance to say a "sweet" pitbull is a "DUD". a "DUD" shitbull is not an embarrassment to a degenerate dog fighter or a grow operator or a studly wannabe gang-banger......so i hear from the average heavy-set dingbat with two-tone hair and dragon tattoo.

california jack's description of game dogs hits all of the important aspects of what makes gripping dogs different from normal dogs.
- holding the prey
- enjoying the attack
- difficult to redirect
- lying (tippy toe then rocket)
- singularly focused on their prey
- impervious to attempts to stop it

the pit nutters keep trying to bury these facts. i just want to preserve them. that's the purpose of this blog post. and i like to remind dog fighters how much i hate them. we're all in this mess because because of these sadistic psychopaths.

i think of the human/ dog bond as great and unique in human experience but what some humans have done is to pervert this relationship into something vile and putrid.

Betcha CD and your 5 followers gets more hits than his photography website. Here's hoping that any search for John Koerner has CD as the top return.

mutants lost the end of its snout? thats so cool! the dozy looking dogger must be very proud. euthanasia for both of them .

thanks for this link cinnamon, i will add it to this blog post.

yes snarky, putrid and vile. that would make a a great blog title for a blog about the men who created fighting dogs.

by the way, this dog in the ukraine is named KAMO but i couldn't find his pedigree. i am not implying that JOHN KOERNER bred him, just proving my point about the slavs being especially savage. i already proved that he is (was) involved with breeding and selling on the international level.

@ fucking pitters
lose some ignorance and do your homework on what your dog really is . just because dog fighting is illegal doesnt mean it no longer happens or that your dogs genealogy has somehow changed. actually i dont really believe you are all that stupid ,.... most of you know the truth but it doesnt mean anything.

awwe, come on Snarky, how can all the douche bag owners be the best they can be without the perfect tell tale douche bag accessory, the pit...

http://www.windsorstar.com/life/Protesters+never+again+after+mauled+death+Montreal+Dogs+daycare/6210276/story.html
Let's see...the dog had been decapitated and partially eaten by other dogs...guess the breed?

i had to come say hi cats and kittens!!! i wonder if california jack knows he bred and sold honeybunch!!! ROFL

kristi, you really do need to click on the links before you embarrass yourself.

and you call yourself a dogwomen. LOL!!

speaking of neanderthals, what happened to this fucktard? his facebook page disappeared. i was there on feb 16th and now it's gone. i saw you left your mark on it. good thing i always save these as pdfs. these thug doggers are slippery.

hey, seeing how TAB descended from honeybunch, do you know if he was a man biter too?

you are going LOOOOOOVE my next big expose!!!

lol and when did i ever call myself a dog woman?

just a wannabee groupie but i don't recall posting even that here before.

i have posted that i have lots of experience with the breed.

anyway, i miss you cats!

lol at stalking facebook pages! you and all your personalities are even more loco over pit bulls than i am!!! maybe the page is gone cause you were blocked.

i don't mean dogwoman in the dog fighting sense. i am talking about experienced, game dog fanciers, not those pit nutter rescue angels you know, the "it's all how you raise 'em" crowd.

anywho, please don't stay away. i like it when you show up.

i hate facebook and i don't have time to stalk anyone, i wish i did! nope, i found this neanderthal quite by accident, seriously, does al have thumbs or did he train his pit bull to upload photos? LOL!! you know how these things happen, you are googling man biters, and before you know it the earth has circled around the sun againand wham! i am at this fucktard's facebook page. LOL!!

where did you go cyclone kristi?
i thot we was gonna have a "rockin good time". i hate those rescue dogs but a real dogwoman might be okay for a while.

re photo of fucktard and mutant k9: how terrible to live in such a place although of course its a matter of degree as almost everywhere now has examples these two and four-legged vermin. in defence of this 4-legged mutant though, he looks like he needs some "thug-love" (ie he has outlived his usefullness and deserves a well placed bullet) a thug fighting dog without a snout is something of an embarrassment .

When you think of Russians (or Ukrainians), don't think of them as Europeans.

They are Oriental white people who happen to be culturally Xtain.

Consider them in this perspective, and they become a lot easier to grok.

Well, the Ukrainians have more to worry about right now than their pit fighters. I've known a few fine Ukrainian immigrants, so please don't equate a whole population with their scum. Every society has scum, don't forget. Ireland has a thriving, and legal, pit fighting industry, if you recall, exporting their product all over Europe.

Anyway, back to the post itself. I just found it and I'm glad I did. Great post. Always appreciate your work.