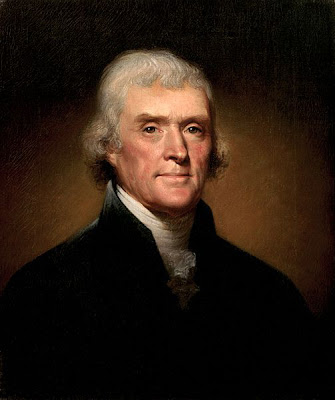 Our third and one of our greatest presidents is on the list of famous pit bull owners. There is only one small problem. The pit bull terrier did not exist in Jefferson's lifetime. Therefore, if you believe that Thomas Jefferson owned pit bulls, you also acknowledge that bulldogs ARE pit bulls, something most bulldog and APBT fanciers are loathe to do.

Historical records indicate upon his return from France in 1789, Jefferson brought back French Shepherds and shortly after the turn of the century, General Lafayette gave Jefferson a couple of Briards to protect his sheep. Jefferson later imported Briards. There is also one very odd, very brief reference from a slave who stated that Jefferson owned two bulldogs. (possibly one of these bulldogs?)

Jefferson had little tolerance for dogs that brought harm to his sheep, regardless of whether the harm was done by his own dogs or those belonging to his slaves or his neighbors. Jefferson once ordered a dog hung for killing his sheep and he destroyed many of his own dogs who were described as "mischievous".

He was not so lucky with Grizzle, a second sheepdog sent to Monticello from Normandy in 1790. In 1796 Grizzle's line, which had proved "mischievous," was destroyed - all except Damon, who was kept out of mischief at the end of a chain.

No one has yet solved the mystery of what Bergère, Grizzle and their progeny looked like. Some have suggested they were long-tailed shaggy Briards. This breed, however, bears little resemblance to the chien de berger in Buffon's Histoire naturelle. In the only eyewitness account, which raises more questions than it answers, the slave Isaac remembered that Jefferson "had dogs named Ceres, Bull, Armandy, and Claremont; most of 'em French dogs; he brought 'em over with him from France. Bull and Ceres were bulldogs. He brought over Buzzy with him too; she pupped at sea: Armandy and Claremont, stump tails, both black." Buzzy was obviously Bergère, and Claremont - correctly Clermont - was no doubt one of her pups born on that vessel. Ceres may have been the second of Bergère's pups, named for the ship that had carried Jefferson in the opposite direction in 1784. Armandy was perhaps Norman, one of only three of Bergère's descendants left at Monticello in 1796; a fourth, Sancho, belonged to Thomas Mann Randolph. The reference to bulldogs is puzzling, since no other mention of the presence of this breed at Monticello has been found.

"I participate in all your hostility to dogs, and would readily join in any plan for exterminating the whole race."

"To secure wool enough, the negroes dogs must all be killed. Do not spare a single one. ..Let this be carried into execution immediately."

Is an american bulldog a pit bull?
Posted by scurrilous amateur blogger at 3/02/2012