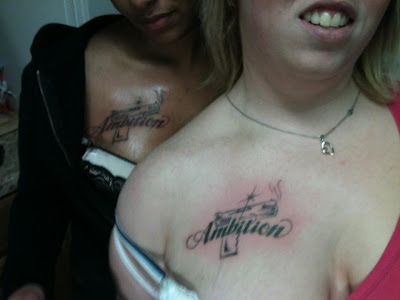 (the tattoo is of a smoking gun with the word "Ambition". close up

watertown, new york LASHURE'S people pleasin never been aggressive before nanny dog ROSCOE, acted out his own little version of goldilocks and the 3 snack sized dogs saturday morning. the first victim was behind a fence with an armed foe. the second victim had two defenders, one armed. best to keep looking for an easier target. and the tenacious never say die pit bull didn't have to look much further before he got lucky. too bad his luck ran out when he encountered a human who loves his dogs more than nutters love their grippers.

ROSCOE ran into a home and attacked a dachshund. that's when the dachshund's owner swung into action, stabbing and clubbing the mutant to death.

and for Mr King's trouble and trauma, does he get an "oh my god, i'm so sorry. i will pay for the vet bill and the clean up of your home. please send me the bill. i'm sorry, i'm sorry. i am so glad you are okay."

KIMBERLY LASHURE goes public and makes excuses. "ROSCOE was a family pet. It was not his nature to attack, he has been fine with my children. His collar gave him a rash, so I took it off and he SOMEHOW got loose." the fact that this mouthbreather doesn't know the answer and is clinging to "somehow" is a real head scratcher. i feel like i am back at catherine hedges' website.

and how about this statement...

“I would just ask, Why did he have to be killed?” she said. “I don’t understand that. That’s the question that I have. If you had to hurt him and we had to take him to the vet — if we had to amputate a leg — at least the dog would still be living.”

that pit bull drinking game would come in handy right about now. i think it would make LASHURE a little easier to understand.

i am a teetotaler, so i will opt for a quick background check on the ambitious mouthbreather instead.

oct 2008 Christopher L. Arruda, 25, of 906 Water St., was being held Wednesday in the Metro-Jefferson Public Safety Building under $5,000 bail on a petit larceny charge.

He was arraigned in Watertown City Court following his arrest Tuesday night for the alleged theft of a $199 reciprocating saw at Home Depot.

Following the alleged 7 p.m. theft, police were provided information that led patrols to go to the Lashure residence and wait for the suspects to arrive. When they were confronted on Waltham Street, they did not have the saw, police said. The investigation continues.

Mr. Arruda is also facing a charge of seventh-degree criminal possession of a controlled substance, cited Oct. 8 when the Metro-Jeff Drug Task Force alleged he had heroin.

Ms. Lashure was also cited with traffic charges on Sept. 9 when another man who was riding with her was found possessing heroin.

She is accused of possessing more than a half an ounce of heroin with the intent to sell it in early October in the town of Adams. It is also alleged that she arranged with others to have the drug transported into the county. She is further accused of providing heroin to another person to sell it on early November in Watertown and of allowing her Waltham Street residence to be used as a place for drug sales.

june 2009 A Watertown woman was sentenced Friday in Jefferson County Court to 1 1/2 years in state prison for possessing heroin.

Kimberly N. Lashure, 21, address unknown, will have to undergo an additional year of supervision upon release from prison for a March 17 guilty plea to third-degree attempted criminal sale of a controlled substance. She was accused in a grand jury indictment in December of possessing more than one-half ounce of heroin with the intent to sell.

nov 2011 Eleven people were arraigned Friday in Jefferson County Court on grand jury indictments unsealed in court alleging they had and sold cocaine.


this mouthbreather is too stupid to even come up with a name for her child.


a convicted felon in possession of a pit bull. WHY? why is this even allowed?

KIMBERLY LASHURE will appear in court on March 29 on charges of damage to property, having a dog at large and having a dog without its proper tags.


THIS HOME INVASION WAS MADE POSSIBLE IN PART BY THE APATHETIC WATERTOWN POLICE DEPARTMENT FOR REFUSING TO DISPATCH AN OFFICER FOR A MERE "STRAY DOG".
Posted by scurrilous amateur blogger at 3/20/2012

Clearly, convicted criminals cannot be legally allowed to own one of these foul bred "Felonry Dogs".

The new Nutter meme seems to be "When in doubt, advocate!".

Typical of too many pit owners. Could care less the havic their dogs unleash when they SOMEHOW get loose. The dog got aggressive because of the ski? The dog was already on the rampage..didn't need an excuse.

It seems to be the same every where. Officials all over our continent seem to turn a blind eye to pit bull related issues. When we had our issue with a pit bull, a neighbour of ours called the police for help. They said they don't dispatch officers for loose dogs. It was only when our neighbour yelled at the dispatcher and explained that there were screams coming from our house, did they send police. It's amazing that stupidity seems to be rampant, this day in age and in our great countries.

These home invasion stories really creep me out. Do they creep anyone else out? Or is it just because I'm a girl and home invasion is, like, the worst thing that I can imagine happening to me personally?

I was arrested once when I was very young (caught drinking age 20). I was sent to grownup jail and had to get bailed out by a bondsman, amazingly. Anyway, the bail was expensive, and I was complaining about it to the bondsman, who said to me: "The thing is, for every time someone does something illegal like this and gets caught, they've probably done it twenty times and gotten away with it."

I always keep that in mind when I read someone's criminal record. Food for thought.

I must admit, killing a pit bull with just a knife is impressive. Usually it takes several gun shots.

Familiar story, pit bull owned by a cold hearted and unrepentant felon is killed in the act of mauling an innocent dog... inside that innocent dog owner's home... by the horrified owner of the innocent dog. The pit owner complains that her dog should not have been killed, offers no reimbursement for blood clean up. A new excuse though, "I took off the collar because it gives my pit bull a rash, somehow it got out of my house and into someone else's home." Here is what gives me a rash, pit bull owners like this one. Why is this woman NOT in jail?

i get a warm fuzzy , feelin good feeling when i hear of a well deserved dirtnapping , neatly accomplished . too bad it doesnt work as easily and nicely for two legged mutants of the psychological kind . thanks anyways and its too bad innocents had to pay for this warm fuzzy feeling of mine

Did you crop that photo yourself Dawn? Perfect framing of a pit nutter: freshly inked and inflamed boob and then yellowed teeth within a strange grin that looks like that of butthead.

i would never her ugly mug.

what a great tattoo for a skanky young woman with a shitbull. well not now maybe but she gets to keep the tattoo anyway. LOL

You, my friend, are brilliant! Your writing is truly an art form! Since I've heard of home invasion by shit bull, I have purchased and installed a rod-iron screen/security door, and never, ever leave my doors open! So glad this owner was able to kill this shit bull, one less to worry about!

2006: After being mauled by a Pit Bull, Molly receives the first ever prosthetic limb designed for a horse. Previously, horses with such injuries were doomed.

Disclaimer...You can't make this stuff up!

don't forget paula ybbarra who thanks to her sacrifice helped to advance new surgical techniques.

OMG, you are right DubV!

From the close up link, a bit of trouble in paradise for the nuttress and a former friend.

Kim-e LaShure-Jones Maybe yu should check yourself, no smutt over here... And even if there was why you worrying about me...
January 9 at 8:01am · 1

Nichole Smith Im not worried lmao jus putting it out there i mean n my life time i have seen mad fake bitched nd supposely "friends" but u top the cake but get it hahhaha
January 9 at 11:08am

Now we know the pit people hate these blogs. I, however, think you are doing a public service by letting people know the true nature of pits so they can be informed and educated! If everything about pits is sugarcoated, how can the pit people then call owners who's pits attack irresponsible? Heck, they were told that pits were nanny dogs, kind and loving, etc!

Haters are gonna hate. If they weren't already haters, they wouldn't have pit bulls. In my estimation, a minority of pit bull owners are sentimental dorks--I include one of my best friends in this category, unfortunately. But most of them are hateful haters who own pits because pits intimidate the hell out of other people.

Craven is doing a public service. This website changed me. There's nothing like Craven Desires on the internet. Besides the fact that it's written in a really funny way, the evidence about pit bulls and aggression is appalling and beyond refute. I mean, you can't discredit jack shit on this website.

Finally--it's nice to see someone stick it to the bullies, no pun intended.

Have a great weekend.

cinnamon 05, i agree re the type of pitter who loves attention and eliciting fear or loathing in others. of course most of these are just young , stupid and immature but some are obviously a bit more deranged than normal for todays youth. some pitters will even complain about the negative response they get when they parade their fucking mutants around with spike collars and other special protective garbage. W.T.F. do they expect ? ass-holes

@ miss margo i meant.
i also agree about craven standing up the bullies and psycho-mutants , k9 and primate both. unfortunately a big percentage of people either dont care or are too chicken-shit to take a stand against this problem .

after my son was attacked, Craven's blog was the first one that allowed the sheer amount of anger that seeped into my soul feel justified. To see someone so bravely, and with a beautifully honed attitude stick it to the douche bag nutters makes
me grin from ear to ear.

I find it amusing at their frustrations at being unable to convince everyone to follow their fanatical views..inability to intimidate the media to not run pitbull attack stories and the constant lame changing of explainations for attacks. We have pits in our area. The ones who live here(not the visiting ones that attacked my dog)know better than to let them get loose. This is hunting territory and owners won't allow their prize hunting dogs to get killed by pits. They'll just shoot them. There's no calling 911 or animal control.