A little snafu in Godfrey but otherwise everything is going according to plan ;-) 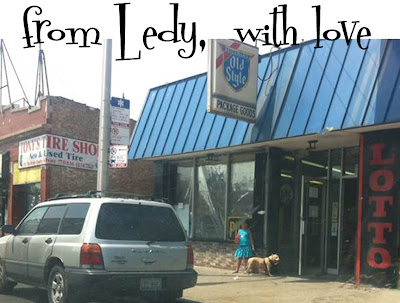 Just a little Postcard from Hell!

Sweetie, hold on tight to Daddy's pit bull while I get myself a 6 pack...

Its ears are cropped. I'm sure it's just the family pet...

I noticed in another post that someone asked about Jane Saul Berkey of Manhattan and West Palm Beach FL.

One of craven's other blog posts covered the Saul situation pretty well, and I finally found it. Read down through the comments.

Saul's father made money in the New York City rag trade, and it's being spent on pit bulls.

Yeah, it's the family pet, all right. Just like the buffed-up mutant next door. Thing looks like the doggie equivalent of Arnold Schwarzenegger.

You should have seen its owner pulling it into the house when a neighbor saw it. Something tells me that the owner doesn't want the rest of us to see what he's doing at his place.

i think if pit is looking buffed-up like schwarzenegger, it is not a fighting dog.

If it's a pit, it will probably still fight. If it's a "pet" pit bull or a "game" pit bull, I'd never take that chance. Recently, I knew someone with pit bulls and they were extremely aggressive. I've never even suspected he treated those dogs badly. It's just how they were.

And yes, they were relatively calm and friendly around humans (almost like zombies), but if you had your dog with you, get ready for war!

That's how they are supposed to be. And those pits were not the over-sized pits, they were lean 50 lb. pits and each had some mental defect because he couldn't control at least one of them. It was always going after the other male.

He did manage to squeeze a litter of of the female while I knew him.

i didn't mean the dog wouldn't fight. i meant the dog was not used for fighting. visible ribs and backbones are a must for the pit fighter.

If you're going to accuse a pit nutter of something, then make it something you have evidence for (irresponsible, idiot, naive, etc). I'd be careful throwing around dog fighting accusations because most pit bulls are not fought purposefully. Making accusations you can't back up should be the province of pit nutters, and a blight on their credibility.

Yep, seems a lot of them are "[insert pit bull name here] has always been loving and gentle, would never hurt a fly". So if what they say is true, pits fight "on accident".

It must be a quote out of the pit bull "press kit". I read somewhere a while back where they actually have a press kit. Standard issue for pit owners. After I read it, becoming more and more nauseous after every word, I realized it's the same drivel I heard at my dog club. And I've even heard them call people "sheep" for disputing anything from their pit bull bible.

I swear, they are a sad group of people.

They need to reinforce each other and distance themselves from others because that is what groups do when they must deal with cognitive dissonance. Our position can be believed without strain.

my snack sized dog might be a tender shrieking morsel, for a mutant, but whats comes next will not be good for its digestion. or its pitterine owner(s). up comes a big belly full of beer and pizza ...lol , thats what pitters have everyday , no?

PITTERS ALL THINK LIKE THIS: all dogs are good , even pitbulls ,only people are bad , the irresponsible ones that allow their mutants to shred other dogs and people . oh and those bad dog owners who dont look after their normal dogs by allowing them to bark and bring on instant gory death are bad too. so yea , my pitbull is good and im good cuz im a responsible pitbull idiot but you with your poodle are to blame if you allow my mutant to shred your innocent dog . follow ?