nutter update ROBERT COLE, with a community college AA degree in psychology and a dog training certificate under his belt, refutes the injury description of experts:
“There was too much weird stuff going on than being hit by a car — no broken bones, no fractures, no contusions that are that deep. Everything is with a sharp object.”

it's the old "too much weird stuff" defense. 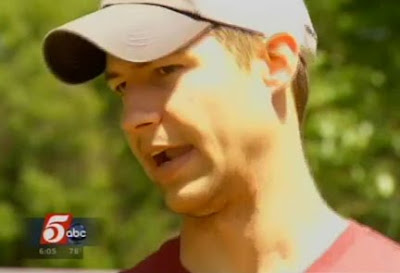 PIT BULL STOLEN FROM YARD, BEATEN, STABBED, BLOODY AND RETURNED WITH THREATENING HATEFUL MESSAGE AGAINST NUTTER OWNER PAINTED ON HIS BACK!!!!!!!!!!!!!

nah, just pulling your leg. actually, that was the FIRST story told by minnesota dog whisperer ROBERT COLE but authorities say there were several people who witnessed the pit bull running at large and veterinary staff say the injuries are consistent with being hit by a car.

the green message scribbled on the pit bull is still being looked into. coverup?

bob has an excuse though (they always do). the pit bull escaped from his yard under the watchful eye of his fiance (24/7 watchful eye no doubt). blame the kid, blame the woman, blame the mailman or the weather.

so what do you do when you are too to stupid to contain your pit bull and it gets hurt?
HIGHLIGHT THE "TRAGEDY" AND BEG FOR DONATIONS!

several nutter examiners picked up the story, including PENNY EIMS of washington state. i remember fuzupf showing up here a while back and criticizing dogsbite.org for reporting on a human fatality before all of the facts were in. 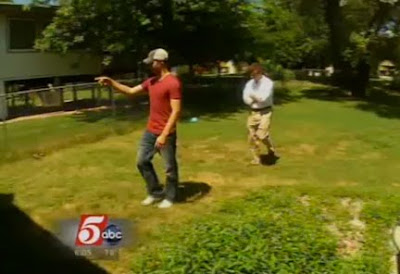 http://kstp.com/news/stories/S2705759.shtml?cat=1
awesome video of ROBERT COLE explaining in calm and elaborate detail of the horrors that his pit bull just experienced.

These people are complete psychos, aren't they?

Paranoid psychos, to be precise.

Unfortunately, all they have to do is sow seeds of doubt and paranoia and they'll have scores following them. Like lambs to the slaughter.

WTF? this is the weirdest nutter behavior I've ever heard of.

Actually, it is not a first. Last year a story surfaced about a child's "service pit" stolen from the yard by a mysterious woman in a black SUV. The pit was beaten and thrown back in the yard. The child's mother was all over the news hoping for attention and cash. Turns out that the dog ran out the door and got hit by a car. No mystery, no conspiracy, no abuse of a pit bull. Just another irresponsible nutter hoping to cash in.

Yeah, it would look too bad if the star of responsible ownership had to admit his pit got out and was run over. Time to cook up a magnificent victim twist for the good of the advocacy.

Just when you think they couldn't damage their credibility anymore, one among them will step up with a fresh new version of bat-shit-crazy.

I stand corrected, april 29. I must have missed that one. This one should have learned from that one's failure, but nutters are virtually unteachable.

You can read more about it here..

must be that P.P.D rearing its ugly head again. pitterine personality disorder......lying , magical thinking , lack of remorse , attitude of entitlement , cruelty to animals .

Seems pit bull rescue is his bread and butter. Making up the shocking pibbles story not only releases him from responsibility but it also gives him sympathy from his pit nutter community. Rather then criticism about the inadequate confinement of his pit bulls where they eventually escaped.

Another pit nutter who thinks he can pull one over on the public. Imagine that. Now he and his pits are in hiding hoping it will all blow over and everyone will forget.

Who can forget the heart warming tale of Mimi the "Iraqi Vet" Service dog falsely accused of chomping neighbors. Local Pit Rescues raised over $17K to save her.

Months later, after she mauled a Father and son walking by Woods residence, she was Finally euthanized

Okay, where's the story on Mimi's second mauling? I can't miss this.

Cazz, Here is the story.
http://blog.dogsbite.org/2010/12/fort-worth-pit-bull-owner-steven-woods.html

As Vintage always says... you can't make this stuff up.

It is unbelievable that this guy wrote on his supposedly dying pit.

He couldn't think 2 steps ahead to ponder, "what if I get caught? How will it look?"

I think this is an unintended consequence of pit bull propaganda saying police departments are so incompetent and stupid they can't a. identify a pit bull b. find someone who can identify the dog as a pit c. tell the difference between reliable and unreliable information in an investigation.

It also reveals that they really do believe victims are just dog haters arbitrarily picking on them and not genuinely outraged that morons are bringing in fighting dogs to maul them.

How could anyone believe that a person who believed pit bulls to be unnecessarily and unpredictably dangerous would steal and abuse one?

That's right, this pit nutter wrote hateful shit on his pit bull while it was bleeding and dying. That's pretty sick.

LOL!!
but ya know dude, pit bulls only for living is to please their owners.

i had some fun at steven woods' expense.

i wanted to have more fun at robert cole's expense but i am preoccupied with andrew again.

"How could anyone believe that a person who believed pit bulls to be unnecessarily and unpredictably dangerous would steal and abuse one?"

i've wondered that too.

wait a minute. did cole confess to writing that message on his dog? please post the link here.

this story is a bit reminiscent of the guy in the manhattan apartment who has to get rid of his pit so he has it put down , then does himself in too . " a breed of dog for people with mental issues " . many of these people are actually bleeding heart ninnies and then there are the cold-hearted grifters who prey on these types.

nutters are too funny sometimes. they are criticizing one of the news agencies coverage of this. their panties are all in a bunch over the use of the word SAVAGE in the title. someone else explains to the ethereal nutter that SAVAGE is the name of the city.

Cole didn't confess to writing that message, but who would have? the driver of the car? it's supposition, but who else could have done that?

Exactly, I believe the pit was roaming for 20 minutes, comes back "abused" with the words "Back off Bob" written on him?

What an idiot. I hope the police catch him in his lies and prosecute him for wasting everyone's time. They should also take his pit and let him keep the lab as long as he promises not to write stuff on him.

I don't think this is taking responsibility when you let your dogs run loose:

"The dog, a four-year-old male named Cesar, made headlines across the Twin Cities Thursday after the Midwestern Animal Shelter & Services put out an alert in social media, seeking help paying the dog's medical bills."

Seems Robert Cole, like most pit owners, love screaming the "responsible owner" mantra but when it's time to practice what you preach, they ask for everyone else to pay the medical bills.

In addition, the dog's owner, 27-year-old Robert Randall Cole, has a Scott County warrant out for his arrest for an unpaid fine for having unlicensed dogs. Cole was cited by the Savage Police Department on May 2 because a week earlier a resident had reported that Cole's pit bull and black Lab were running loose in the area and allegedly tried to get at other dogs in fenced-in areas. While investigating the report from April, police learned that Cole's dogs were unlicensed.


You Can't Make This Stuff Up!

thank you vintage. this story been moved to the top of the queue.

i am sure he presented himself to you as a stand up guy. sorry you got nailed by this con artist.

Check out all the negative yelp reviews about the dog whisperer of mn. Pathetic

i can't believe this fucktard still has a job training dogs!

Check out his F rating at BBB MN
http://www.bbb.org/minnesota/business-reviews/pet-training-dog/the-dog-whisperer-of-mn-in-savage-mn-96385013

Do NOT give this guy any of your money or your dog to train!!

thank you bob. i might just have to bump the dog whisperer to the top.