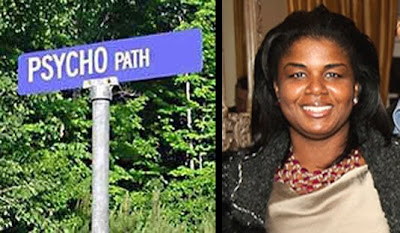 silver springs, maryland last month a letter carrier encountered a loose aggressive pit bull on his route. he tried verbal commands and using his mail bag to ward off the mutant. when that failed he pepper sprayed it. that failed so he pepper sprayed it again and the mutant retreated. the "doctor" confronted the letter carrier as he sat in his mail truck. she accused him of attacking her dog then punched him several times in the head neck and face. another resident intervened.

the "doctor" has been charged with a felony, by the FEDS!

this "doctor" has very poor patient ratings, she does not even get points for being punctual. ;) in 2008, she closed her failing practice in california and returned to maryland to start anew at John Hopkins Medical Center in Prince George's County (county wide ban on mutants) with a base salary of $115K, plus bonuses based on the quality of care. seems unlikely that bonuses are in her future given her bed side and her curb side manner.

the medical board needs to revoke DR TANECH WALFORD'S license to practice medicine.

I find it strange that an educated person, like a doctor, could want a dog like that. Then assault the victim? What's this world coming too?

like i keep saying:
pit nutterism and dingbattery crosses all boundries. that a black ,female , doctor attacks a postie who is only defending himself in a rather innocuous and non violent way should not be as surprising as it seems. she may be a doctor but it seems her training missed the part about doing no harm. by keeping a pitbull she puts other animals and people at risk of being harmed. it would seem she is a better pit dingbat than she is a doctor.

OBTW : these people who keep pit bull dogs are seriously fucked , not necessarily in the intelligence department , but in the place where there should be morality . something bad happened to them , a daddy thing , a parental neglect or abuse thing , or something else .....but something . god, i hate fucked people.

I've had to put up with drs (and med students) a lot. Most don't go into it to help people, they do it because they live in families where it is expected or because they want prestige. There are people who get into it for more sinister personal reasons (like to have total control over helpless people or to feed a narcissistic self image). It attracts some really psychologically damaged individuals, fortunately most cannot get into med school easily. Unfortunately there doesn't seem to be any screening to weed these folks out. I suppose they think if you're psychologically "together" enough to pass school you're okay, though people like dr michael swango prove otherwise.

Oh man, I guess the aurora massacre shooter was a med student until a month ago.

I agree with Skeptifem. I have relatives who spent their careers in hospitals.

M.D.s are infamous for having rage and entitlement issues.

I love reading the comments here. Not only are they fascinating to read, they are educational. Excellent muckraking, Dawn. Keep on doing what you're doing, folks!

"she may be a doctor but it seems her training missed the part about doing no harm."

it doesn't matter if it is dogs or humans, i put more weight on nature. she could have had the best training in the world but her hard wiring is faulty.

My dad is a recently retired postal workers. The pepper spray they give them is subpar, and they will get fired for carrying a pocket knife. They are sitting ducks.

This reminds me of that book "The sociopath next door."

That is criminal negligence. Postal workers need to be informed about the dangers they facing and to be equipped to deal with them. If the privileges of pit promoters to breed and traffic in dangerous animals with no restrictions is given priority over the safety of public servants then something is rotten in Denmark, methinks.

@snack sized dog: Tx for the good book recommendation - The Sociopath Next Door by Martha Stout. I also recommend Without Conscience by Robert Hare.

I can say a hearty "amen" to your comment "M.D.s are infamous for having rage and entitlement issues." I spent two years as a circulating nurse in the O.R.
You would not believe what goes on behind those double doors. This is why I left the department.

That is scary that a person like that is a Dr. of Medicine. Scary, but sadly, not surprising.

I agree Jake, I learn so much from the comments here!

I teach biology to undergraduates, and most of the first-year students want to go into medicine. Very few actually have a real interest in any topics related to medicine, (like physiology) and the majority seem to want to become doctors for the money and prestige.

Most of them don't get in, but some of the power and prestige hunters can as long as they're good at memorizing stuff.

For Pit Nutters, The Postman only Rings Once

You have to be a control freak in order to be a competent physician--it's, like, practically part of the job description, because SO MUCH can go wrong when one is practicing medicine. Add to that, med school filters out all but the most competitive (being competitive isn't bad in and of itself...but we all know what hyper-competitive people can be like). Then they get tortured in residency, which gives them major resentments and chips on their shoulders. You want to get on a doctor's good side, just invite him to tell you about how much he hated his residency. He will light up like a Christmas tree. They carry the hatred of it their whole lives.

That's my analysis on why so many physicians are abusive.

Not all of them are--it goes without saying.

But just speaking for myself...? I've only met one who had a truly sweet, soft personality.

And like Garnet said: medicine, as a study, requires a shit ton of memorization, concentration, and technical proficiency. It requires el zilcho critical thinking skills.

I'm not bashing M.D.s. They perform a crucial role in society. But they are, on the whole, attitudinally similar.

Garnet, BIOLOGY RAWKS! I only took intro courses but I loved all that nifty shit we did in lab. Except for dissecting a locust. I am scared of big bugs.

I'm with Dayna and Jake. This is one of my favorite internet hangouts.

I get a kick out of imagining the lives of the other commenters.

I would sort of like to see pictures of everyone's pets!

Hey Snack-Size, thanks for the heads-up about the Stout book. I just ordered it.

YQN, I just received Hare's book, that I'd ordered a few weeks ago.

It's alarming how our present entitlement culture is stimulating the socio/psycho - paths among us. I like the idea of educating myself to deal better with them.

Awww, they are super cute. Are they sisters?

Here are my birds. I have a pretty awesome fish tank, too:

Baby, the sweet Mutt on the right is about 2.5 times the size of Bella, the Chihuahua on the left. Despite that, people have asked if they are related. Bella was rescued as a tiny puppy, from the middle of nowhere, apparently abandoned and weighing a pound and a half, when Baby was about a year old. Baby welcomed her, treating her as gently as if she were her own daughter.

You have quite the menagerie there! I see at least 4 birds. Kudos! Didn't see the fish tank though.

I just had to point out a great-big-fat LOL at 'bedside manner and curbside manner'. That had me howling like a nutter facing accountability. I LOVE the writing in this blog. Rereading it a second time since first tearing through it as a 'noob' in 2011. So much gold here.