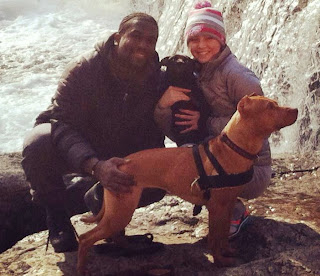 The 22 year old has been the running back for the Philadelphia Eagles since 2012. In 2008, Brown received the Hall Trophy for most outstanding high school football player and a couple other awards  before the Eagles drafted him to play alongside MICHAEL VICK.

On May 21st, a rural property in Fall Creek, Wisconsin was raided and 27 dogs were seized. The property (Northland Pits at E19252 Scenic Drive) is owned by JOSEPH A SUDBRINK. A female and her 7 puppies were returned to BROWN, while the remaining dogs are still in custody. SUDBRINK was charged with mistreating animals and operating as a dog breeder without a license. A criminal investigation is ongoing.

In addition to scarring, indicative of fighting and "yard accidents", some of the dogs also had ringworm and possibly other skin issues and were living in substandard housing. SUDBRINK had his vet examine the dogs, who are in the care of Eau Claire County Humane. The vet found the pit bulldogs had "dirty ears" and demanded they be returned before they die from a lethal dose of ear wax.

Brown claims to engage in "extreme agility" and posted a video. A quick look at his extensive list of facebook "friends" reveals pit bulldog apologists like SCOT E DOWD and an assortment of dog fighting scum from around the world.

"Responsible" pit bull owners simply do not breed their pit bulls. Roughly a million pit bulls are euthanized in American shelters every year. Mr. Brown has told some whoppers here...

i don't believe he's not a dogfighter for one second. and he gets his dogs back.