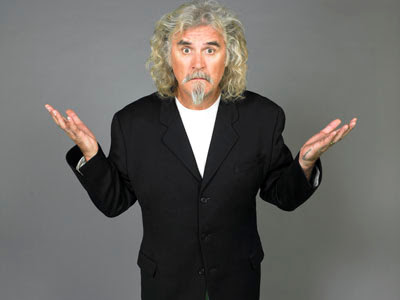 Maggie Thatcher. Yeah. She was on telly... Well, Carol stormed out, I hear, y'know. I was broken hearted. It was in the Sun, it must be true. I think she ran up to fuck with Rupert Murdock, and told him all about it. No. Only wish her fucking brother had run a home, but... Maggie was on the telly last night, speaking from Chicago. All the Torys are shitting themselves "You're gonna drop us in it." Shitting themselves "Oh God, she coming back, oh no, she'll spank us." And she said, she's against the single European currency, because she doesn't want an unelected body farting about with the finances of this country. So I can only imagine, she's going to disband the House of Lords.

No, but parliament kills me. I mean... the thing that's been getting me, since I came back - I came back a month ago from America - was this raging thing about Pit Bulls. I mean, it's the same in America, since [???] dogs are biting [???] forget them [???] It's the ugliest looking dog in the world. Them pit bulls are bought by those spectacular tattooed fuckwits, you know. It's a shark on a leash, isn't it, this pointy head, the eyes at the corners, a row of teeth and an arsehole. And Parliament, they were going to kill them all. "Let's shoot the fuckers." "No, let's cut the balls off." "Let's shoot them, and cut the balls off." "No, let's cut the balls off first, then shoot the fuckers." "Shooting's too good for them, let's give them a hefty kick in the balls." And you know what, they sat up till four o'clock in the morning, and they all get pissed and had a sing-song. You see, that's Paliament. You see, they lead you believe that they make decisions in there, and the laws. No they don't. It's a big shockabsorber, Parliament. Good ideas go in and they fucking bash them about, and they fuck them up and doing things... take them to committee, and out of committee and then another wee committee and a subcommittee. And it comes out a shadow of its former self, you know, of use to no bugger. The dogs, will we shoot them, or will we cut their balls off? Decision: We'll make people register them at the post office. Now, that's got the tattooed fuckwits shaking in their shoes. "Oh no, the post office! What're we gonna do? Ooohh. Oh, I don't even know where my savings book is. Oohhh. "

"Shooting's too good for them, let's give them a hefty kick in the balls." LOL!

The last part is depressingly true as well. Able bodied young panhandlers seem to have an affinity for this class of dog (in my area anyway), which is exasperating to say the least.

Please sign the petition to end the use of FAKE service animals, which is harming people who are truly disabled and creating a public nuisance: http://www.cci.org/site/c.cdKGIRNqEmG/b.3978475/k.BED8/Home.htm

always liked billy connolly. like him even more now.

I vote for cutting their balls off first, then shooting them!

I do not object to the presence of homeless people at all...but every time I see one with a dog, that dog is a pit bull. Fucking EVERY TIME.

There is a homeless guy by the 7-11 by where I work. He has a kitty named "Meow-Meow." I don't think it's responsible for homeless people to keep animals, but this cat is leash-trained and always has food and water and a crate. I've never seen anything like it.

I was unfamiliar with Billy Connolly before, but he's really funny.

I'm probably just being captain obvious here, but I'd say it makes perfect sense in a few ways for why homeless people would have pits. Pits are the dogs most likely to be abandoned and so homeless people in inner cities probably have them start hanging around and take them in as a companion. Also, if you are homeless, then it would make sense from an individual standpoint to have a dog that would decrease the chance of someone messing with you.

Miss Margo, there are homeless people, then there are thugs hiding from Johnny Law who have warrants, hiding out from the crimes they committed, etc and playing the act of poor homeless person to get away with their crimes.

The latter have pit bulls and they are preying on society in many ways.

I thought you might be interested in Colby's obituary in Newburyport Mass where they love them those game dog and bird breeders.

In the obituary they brag about his game fighting birds that he was openly breeding and selling, with discussions online from his customers about the bird fighting they were involved in found all over the web.

Where was MSPCA and Amy Marder of Animal Rescue League, the pit bull pusher? They were lobbying WITH the Colbys. This is what happens when people like AKC breeder Amy Marder claim they are involved in animal protection and get involved in legislation. The game dog breeders get helped, everyone else gets screwed over.

Yes, animal fighting is a crime.

The dog fighters wish him a fond farewell though.


Obama Comes Out Against Dog Breed-Specific Legislation, Joins The Fight For Pit Bulls


it's so easy to salute the inherent risk of life when you, your wife and your children are bubble wrapped. thank you secret service!