"Then came the excruciating rabies shots because they couldn't find the dog. I later learned from the Humane Society and the District Attorney that the owner hid the dog, and even denied that he owned a Pit Bull."

the rest of John Castle's nightmare is at dogsbite.org. 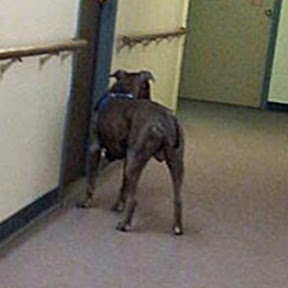 "Psychopaths show a stunning lack of concern for the devastating effects their actions have on others. Often they are completely forthright about the matter, calmly stating that they have no sense of guilt, [and] are not sorry for the pain and destruction they have caused, which is associated with a remarkable ability to rationalize their behavior." Dr Robert Hare

"They are frequently callous and hedonistic, showing marked emotional immaturity, with lack of responsibility, lack of judgement, and an ability to rationalize their behavior so that it appears warranted, reasonable, and justified." Dr Hervey Cleckley

Check out the nads on that "service" pit. I've never seen a real service dog running loose either.

thanks for pointing that out. i started to but then changed my mind.

there is really nothing worse on my eyes than pit bull testicles. it can only mean MORE pit bulls.

If there's anything I hate more than a pit nutter, it's a pit nutter with a "service"/"therapy" pit. Bastards.

Will read Mr. Castle's letter now and try not to blow a gasket.

Ever notice how rare it is these days to see an unneutered pet dog of ANY breed other than a pit bull?

As stupid as people are these days, they probably think the dog is using birth control because their male dog never pops out a litter of puppies.

Service pit was probably deliberately planted there to intimidate the victim.

His story is heartbreaking.
That's the first thing I noticed about that "service" pit. The only thing it'll be servicing is another ugly pit. I have never seen a loose service dog either.

"The only thing it'll be servicing is another ugly pit."

His story is heartbreaking. It is RIDICULOUS the way Mr. Castle has been treated. It is insane that some PoS excuse for a dog owner let their mauler loose and then HID the stupid thing so that poor Mr. Castle had to endure rabies shots. Why the police didn't happen to shoot the mauler during that time, IDK. Because you know he just kept "somehow" getting out. The dog needs to be killed and the owner needs both criminal and civil charges bought against him.

Then this so-called service dog should be evicted from the apartment along with its owned. Perhaps more than that should be done to this pair, but that is a start.

Also, people who abuse the term "service dog" in this way should have charges brought against them. For one thing, this seems like fraud. They are clearly grabbing privileges the have no right to and are demonstrably eroding the quality of life for 150 people in the building. It is pitiful that Mr. Castle's grandchildren can't visit him. He is 79 years old and has undergone a traumatic injury with complications and a long recovery. If not for this be-nutted mauler stomping all over the buildings sans any supervision from its owner, then Mr. Castle could invite his grandchildren over to see him.

At this point, it is interfering with the rights of his entire family. Now, multiply that by every senior citizen in the building and we're easily talking about over 1,000 people whose rates rights are being trampled by the unwarranted service vest sometimes worn by this potentially vicious dog.

oops, I made some typos. I have no idea what "rates" before rights was supposed to be in the last sentence. sometimes my phone does weird things... I don't think there was even supposed to be a word there. I am sorry for the mess. I hope people can get the gist of my comment.

I am just so steamed on Mr Castle's behalf. And looking at the rear view of that mauler just underscored how unfair this is.

I hope he has very good insurance.

The service this dog is doing for its owner is intimidation, and it's doing it well.

Something has got to be done about this Service Pit Bull Farse. Its seriously dangerous. It is a federal offense to lie, but no one enforces it.

You CAN get a Service Dog evicted, you have to catch them breaking the rules. They are not protected from this. These pics might be enough if he pursues it.

(In am sure he has Medicaid, so taxpayers get topaz the cost of this pit bullies irresponsibility)

these pics should absolutely be enough to get it evicted. if i lived in this complex, i would organize all of the tenants to send a letter with the photos and threaten to sue the owner of the property. i'd give them 24 hours to 86 that ugly dog.

If I were the parents of the man's grandkids, I'd be raising a stink with the management of that apartment complex. How dare they deprive those kids the right to visit Grandad where he lives.

If all of the tenants would put their money together, they could hire a lawyer and maybe get control of their building's hallways back.

I have tried looking to see what kinds of dogs can reliably throw down on a pit bull. But, they're all either huge or just as vicious or both.

^^This wasn't for my own benefit. I don't want any type of dog. I was just thinking if Mr. Castle was in the market for a pet maybe he could just such an animal. But, it looks like that would not work out at all.