Maryland, South Dakota, Utah and Missouri are about to discover that they made a deal with the devil. 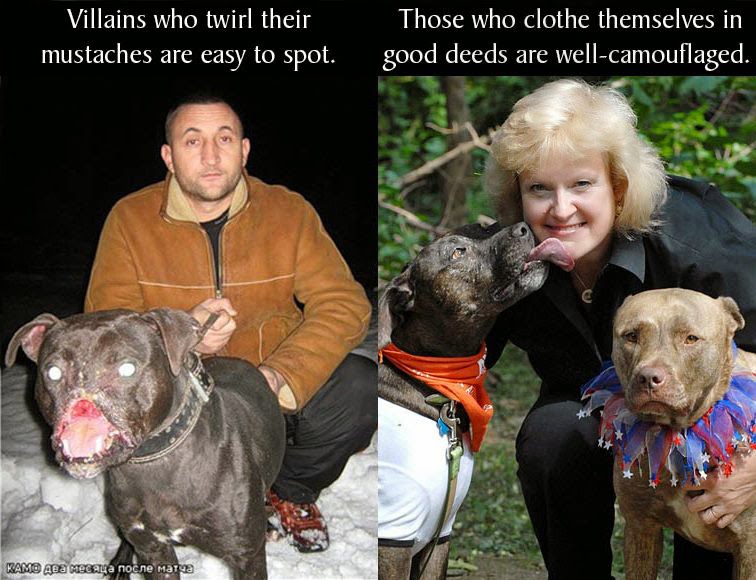 LEDY VANKAVAGE has been busy successfully pushing her dangerous agenda on gullible legislators who in turn are unwittingly putting their constituents at risk. The legislators are buying into her wicked game hook, line and sinker in spite of the fact that pit bulls just keep on killing at a staggering rate.

Two pit bull fatalities occurred in Texas this year and word about them is just now getting to the public thanks to outspoken doctors. The group of courageous doctors in Texas is once again trying to sound the alarm about the gripping dog problem. Almost 100 people have been killed by grippers since their study was published in April 2011. Will anyone listen this time or will we be talking about the next 100 people to die by grippers in April 2017?

Ohio bought the Best Friends propaganda and even allowed Best Friends lawyers to write new Ohio law on dangerous dogs. In the two years since the law written by Best Friends was passed to "give Dog Wardens the tools to deal with dangerous dogs" seven Ohio residents have been killed by dogs, of all breeds. In the previous 25 years Ohio had only six dog mauling deaths. Epic fail. Ohio lawmakers are already considering changes to this predictably failed law. It is a mistake to allow special interest lobbyists to influence state laws.

I was just told of a rampant pit bull that was roaming a friends neighborhood while I was at dog class last night. She was getting out of her car with her dog in front of her house when a police car stopped and told her of the marauding pit who had already attacked one dog (and possibly the person walking it-she was not sure). There was nothing in the local papers about it- and yet nutters will tell you how these dogs are targeted by the media. I do not think there is any accurate measure of the carnage these monsters cause to other pets.

It will be interesting this year when I attend the Pet Expo to see if the "Nanny Dog" posters are all over the pit booths. I have to always be concerned where I am stationed because for the most part they have the breeds in alphabetical order and we are always an aisle away from the Cane Corsos..............

I can not imagine that with all the fatalities that municipalities are not implementing BSL. All we hear is the sound of crickets as the body count rises.

Was I the only who in reading the story of the woman mauled by bear(s) in her neighborhood amazed at how quickly the bears were hunted for and dispatched. No temperament testing or deeming if these were "dangerous" bears.
No Lexus project, no facebook pages..............

I saw the bear mauling and thought it's ironic that a wild animal gets that much media attention, but pit bulls rarely make the national news. We have way more pit bull maulings than bear maulings.

I thought the same thing. A bear being a bear makes national news.
The family pet acting like a land shark not so much.

People need to be able to respond to what is happening locally with local regulations. It amazes me that so many states are forbidding local communities to do this.

I wonder if a community could pass a law that all dogs must be muzzled away from home. I found some tiny muzzles for toy breeds, so I don't see why this can't work. And the muzzle has to be one the dog can't slip. If they're going to be ridiculous, then everyone can be ridiculous right back.

I recently attended a fundraising event for a local animal rescue that was again mercifully free of pits this year. The dogs there ranged from giant to toy breeds--but guess what, nobody died and everyone went home happy with their dogs.

What a joy it would be for normal dog owners if all events could be like this.

I agree on the bear story...the woman surprised five bears in her garage, was mauled by one, and her injuries were not nearly as serious as many pit bull maulings we hear about....plus she lived to tell the tale.

Exactly. You surprise five bears, they will look at each other thinking "Should we run?" while conversely you walk down your street and are taken down with intent to kill, without provocation, warning, reason and unrelenting by someone's "pet" pit bull.

"Exactly. You surprise five bears, they will look at each other thinking "Should we run?" while conversely you walk down your street and are taken down with intent to kill, without provocation, warning, reason and unrelenting by someone's "pet" pit bull. "

There us a huge difference between bears and pit bulls. Unless a bear is defending its cubs, or feels threatened, its rare it will attack. Like most wildlife,, it avoids fighting for fighting sake .
Pits were made to attack and fight.for no reason at all.
5 bears and she lived to tell, and wasn't even as hurt as a pit victim?prices my theory.

Have 100 people really died since 2011? That is shocking! I give the doctors credit for speaking out, but it does seem like it's falling on deaf ears.

I heard on the news this evening, that the bears that were euthanized, might not have been the bears responsible for the mauling. They were put down anyway because they were not afraid of humans. Better to error on the side of caution when it comes to bears, but pit bulls?

The American Medical Association et. el. need to start speaking up about this. They need to be available for comment every time a mauling happens, and create a position paper and press releases on the subject.

They aren't afraid to take a side with other controversial issues relating to medicine.

I think docters mostly keep quiet because if they did say anything against peoples preciouse pibbles it would be like painting a big target on your back. Also noone really asks them for an opinion when BSL comes up as far as I know. Its pretty much turned into a witch hunt for anti-pit bull people and if they did come out publicly they would get a ridiculous amount of harrassment from pro pitters who want to keep thier k9 serial killers.

I wish there was a special pit bull island where nutters and their maulers could run freely together.

have you seen this craven? not only is that a bull terrier but caser is still claiming they're nanny dogs.

They are getting people killed with this "nanny dog" bullshit. Too many people now just believe it. And too many people seem to expect more of these maulers than any dog can really do.

I read about some nutter who left his 10 month old at home in the care of his pit bull while he went to a bar! (He got arrested.) Nanny was sitting outside the closed door to the baby's room while the baby was inside crying because nanny is a DOG and that's about all it could do anyway!

In a recent piece it stated only 2% of US homes have a pit bull. Why is this tiny minority being permitted to make the rules for the rest of us? This is like allowing drunk drivers to make drunk driving laws.

Horrifying numbers and we know that is probably the tip of the iceburg as to pit bull on animal attacks.

Meanwhuke a friend of mind just told me of a pit bull attack in our neighboring community yesterday. Dog attacked a person hes known along time. Tried to take the mans face off, did get his ear off. This did not make the local paper. She is in the medical field so its how she is aware of it.

This on the heels of me sitting through several adds for "love my shit bull". My Husband said there needs to be a lawsuit against that network for promoting that kind of thing.

PutMe you can demand equal time
for a PSA of your own showing the damage done. Crowd source if you need to but I'm willing to bet you'll get offers of help from victims.

PutMeInCharge -- Merritt Clifton has just published about how many other animals the pit bull types are killing:

Thanks sputnik 9:18 - updated the 17 barks article

Some article I was reading today had a comment which posted some quotes from Ledy (obviously, the person who c/ped it was a pit bull owner). To think... just a few months ago, I had no idea who she was and now her name makes my skin crawl.

Put MeinCharge4oneday, you are right, these attacks are being kept from the public, but it is important that people be citizen journalists and go online and give the details. The truth needs to come out.

Last anon, Ledy VanKavage is a lobbyist for Best Friends Animal Society and also is on the staff of the Animal Farm Foundation, a pit bull business organization run by Jane Berkey Saul.

Ledy and Best Friends do things like hold candlelight vigils when there is a dog fight bust with dog fighter kennel owners that even wear their kennel names on their caps, demanding that the dogs be released to them. They want to keep on breeding them.

Ledy VanKavage also famously wrote an extended column about her pride about her family pit bull as a child that was allowed to run around and attack and kill other dogs. The VanKavage family was totally fine with that, thought it was great.

Her dog finally got killed by another dog. Didn't seem to care.

Ledy and Best Friends lobby across the country supporting a pit bull's right to kill and shred other pets, and be exempt from dangerous dog status.

Thank you for the additional information about Ledy.

The fact one of the pit bull advocates named her pit bull protection racket Animal Farm says about all that can be said. I've read that book. That name reveals their purpose and their mindset very clearly.

i've been working on something special just for ledy for at least two months. i really need to hunker down and i finish it.

does anyone know her birthday?

^^is this the same Honeybunch that was a known 'man biter'? If so, she BY HERSELF puts paid to the lie dogmen culled those. She is not only a champion, she is a very high producer (this says the highest ever).

Hilariously, the story recounts once when she was rolled (mini fight to show her off) while pregnant and didn't really fight. The person watching advised the owner to shoot her. Obviously, he didn't because her wins and her litters, etc. all occurred later. So, she would have been shot for not being in the mood to fight one day when she was pretty young and pregnant had it been up to that other guy.

I just read as much as I could stand of Cesar Millan's stupid Parade article. GOOD LORD. That is going to get people killed!

Thank you for the link, Dawn.

Make sure to bookmark the Clifton article on the pet bloodshed pitties create, and share it with animal lovers fare and wide.

I just wish the article didn't start out with dry statistical method-speak. That's going to turn off many casual readers before they get to the terrifying numbers.

packhorse, what article of clifon's are you referring to.

I'm pretty sure packhorse means the one referenced here

thanks for that link dick johnson. i think i will put that in the side bar.

Yep, the link to the 17 barks story that I posted above points to precisely that URL.