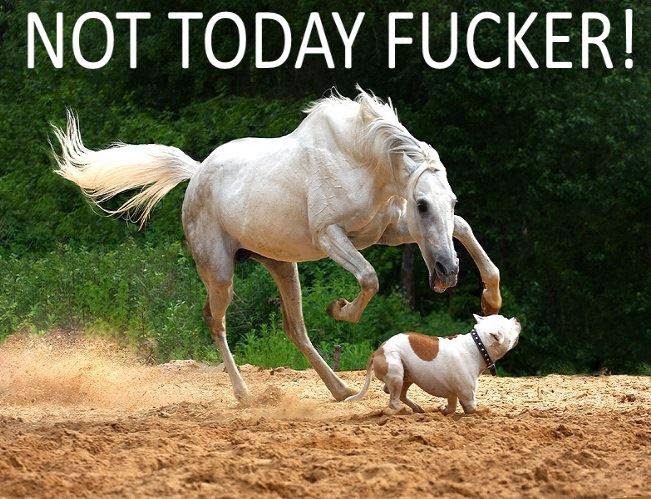 I hope that piece of shit bull was stomped to death.

stomped to death in my dreams. a friend photoshopped this. it's good to maintain a positive outlook :-)

Ha! I've seen my friend's colt adopt this fearsome attitude towards a big blue rubber ball specially designed as a horse toy. Could a blubbery pit bull be far in the offing? Horse Camp! YAY!!!

Brand new reader, brand new fan of yours. Thank you for providing this forum for sense and sensibility. I'd say it was a public service announcement almost. I am amazed though that humans need to be retaught what natural instinct should be. Just the size of these dogs, their massive jaws, the number of deaths - their propensity to pick the weakest and smallest (read bully) for their victims should make any sane person fearful.

When I see one, I cross the street. I don't care if it offends the owner- my little girls are just about the right age and size as their usual targets. I would lay down my life to protect my children, but I shouldn't have to think things like this on our daily walk around the block! Sadly, I live in Memphis - home of the ghetto fighting and we've got the worst of both worlds here: gang/thugs who fight their pits and white rednecks who think they look bad ass. Obviously, both sets of groups share a lower socioeconomic status and we all know how sturdy their fences AND senses can be.

I have to say this photo brings back my introduction to pit bulls.

It was back in the 80's when there were not so many of them.

One of my clients (they had bred a mare to my stallion) had the mare and foal.
They woke up to find 3 pit bulls in their corral with a dead foal and a severely mangled mother still defending herself.

The dogs were rounded up and euthanized.

The mare was left with such damage that she had to be put to sleep.

This weekend I was watching an AKC dog show. In the building were several Cane Corsos. I saw one drag a woman as it tried lunging at another dog. The male handler took the dog and it was all he could do to put him back in his dented/slightly mangled wire crate. We kept our distance. Later the same dog came inches away from getting a small sog whos handler breezed by without even looking.

Last but not least- and this is all the same dog- tried to take off a womans face- but was in the crate. She had bent down at her set up to pick something up.

These dogs are pit bulls on steroids and when you look at their dense bone and dense build and the size of their maw you can see how a human is no match against them.

Overall a scary time being in the same building with those dogs and watching the idiocy of the people who own them.

Oh yes and on another note when I entered the building the morning of the show, the pit bulls were showing (oh wait I mean the American Staffordshire terriers). I had my friend quickly pull her Whippet back as one in front of her turned around while being led, stopped and immediately focused on the Whippet. I yelled watch out to my friend. That did cause the handler to look back with a pissed off look on her face and she said "I've got him". I said yeah sure.

thank you vera. pmic4od, what a horrific introduction to mutants.

That is the worst part of these dogs... morons who think pibble is cute and will brook no nervousness on anyone's part no matter WHAT their mutant is doing. Or without thinking that some people are afraid of dogs.

Love the pic. I wish more horses were more aggressive with dogs that invade their pastures. Alas, they are prey animals though.


nice action shot ...terrified nanny gets stomped while out for the afternoon .

that pic is glorious!

Yeah, by gray mare looks much like that when she gets annoyed with my border collie trying to push her around.

Of course, he's not intent on harm, though I'm pretty darned sure she'll go down fighting if she meets up with a dog that is trying to harm her.

Mules and donkeys are much better at stomping dogs (and coyotes, and even cats) than horses are.

There was a story in yesterdays news about a pit that was shot in a dog park when it attacked another dog.

Note- they identify the dog as a "bull terrier type" but it's a Staffordshire bull/pit type and NOT a bull terrier.