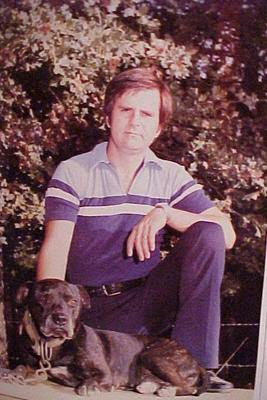 GARY HAMMONDS and RUFUS ROM
Man Eaters
by Gary J. Hammonds (Pit Bull Gazette, May 1982)
Trough the years, the ,,Man Biters,, have been of special interest to me since, in theory, most are not supossed to be game. Simple observation tells me there are as many game man biters(percentage wise) as there are game dogs in the Pit Bull family. Most of the old-timers felt the man biters should be destroyed and most definitely never used in a breeding program. I believe a deeper look into these dogs to be a worthwhile project. Through my research and observation, I have concluded that there are several types of man biters, each of which deserves recognition and comment. The most acceptable of the man biters are those that are both protective and territorial. Most bulldogs have this trait to varying degrees and the beauty of it is that it can be encouraged or discouraged depending on the needs of the owner. These dogs are usually the more intelligent bulldogs and while they are generally gentle with people, will become a terror to the suspicious intruder and literally inhale a direct threat to its master or his property. The second most acceptable man biter is the territorial junk yard dog. This dog gladly accepts its owners but all others are not welcome in its domain. Off his own property, he is not nearly so aggressive except when challenged directly. These dogs are not for the novice but can be kept and are definitely a deterrent to dog thieves and various riffraff. The last acceptable type is the junk yard dog that will bite anyone anytime, just for the fun of it. Many of these dogs actually have to have their feed chucked to them even by their owners. These dogs are for the professional only, and most are probably good candidates for execution. There is also the excitable dog that will bite you to get loose and get another dog, cat, horse or whatever. These dogs are definitely not for the amateur and should be kept from these types of situations as much as possible. Bullyson, Andersons CH Spade and Mesquite Sam were dogs of this type. To me the most dangerous is the latent man biter that just goes bad without provocation. These dogs should always be destroyed as their unpredictability makes them an extremely lethal commodity. This recessive tendency surfaces in other breeds so why should the Pit Bull be any different? The percentage of malicious man biters in the Pit Bull family is extremely low. I believe that through the use of proper breeding methods we can even lower this. Most of the attacks that are given so much news media,, coverage are generally made by dogs of no breeding. Check the records---in most cases where a bulldog mauls or kills someone, they are dogs that were bred by the amateur breeder and usually backed by several generations of scatter-bred individuals, most of which are equally bred badly. So in many cases the breeder is at fault and in all but a few instances, human error enters into the mishap. There is much to be said about the man biters but for the sake of good judgment, everyone who owns one, just like all Pit Bull owners, should be very conscientious. Just one case of carelessness could mean a law against the breed in your area and turn public support from our dogs. That is exactly what we do not need at this point in time. Man biters--keep one if you must, but take care if you do.
Posted by scurrilous amateur blogger at 5/05/2010

Since the publishing of this article in 1982 Pit Bulls have killed nearly 170 humans in North America....


The finger goes out to the Pit Bull community!

I never believed the whole, "they shoot the man biters" routine. Is anyone to believe that some psychotic asshole who's making money with his psycho freak killing machine is going to shoot his money maker because it happens to bite someone now and then?

AND HERE IS THE PROOF, they got these famous, winning dogs and they bite people, but they're making money so why kill them, and let's breed 'em.

So, thank you once again Craven for cutting through the being-in-the-pit-ring-is-as-safe-as-sitting-on-your-porch because "all the ones that bit people were shot" and my pit bull loves everybody. BULLSHIT LIES.

Also, the shades of man biting acceptability is terrific. My favorite being the latent man biter that goes bad without provocation. Seems like they were bred quite a lot to judge from the news.

This will be a good one to link to all over. The problem is nutters don't read for comprehension very well.

The dog fighters do not care if these dogs are man-aggressive or not. All they care is if they win fights. These dogs don't live with people. They live on chains. Their purpose in life is to be used for fighting and/or breeding.

There are many lines that are manbiters that were bred for years. Their descendants are everywhere.

Add in the new mix, like these American Bulldog breeders that are cashing in on the fad through their online puppy mill sales, and intentionally breeding for "fiery temperaments" and using aggression as a marketing point to sell these dogs to sociopaths who WANT aggressive dogs.

But the bottom line is- a dog aggressive dog ("high prey drive" pit bull style) is a danger to humans. Dog aggressive dogs ARE NOT PETS. People get caught in the middle of these attacks and people die. Also the dog-aggressive breeds have a very high rate of child killing. There's a link between being dog-aggressive and killing kids. If you look at the history of nearly every one of these child killer pit bulls, they have a history of attacking other dogs!

Does anyone here know anything about Mesquite Sam? I've looked online, can't find anything...

i find no reference to mesquite sam outside of gary hammonds' fireside chat.

I don't believe for a sec that anyone ever culled a good fighting pit bull type dog because it attacked humans.

But even if they did (which they didn't), it's irrelevant to present day history.

Under the auspices of the SF-SPCA and many other 'humane' societies, we've long ago stopped culling pit bull type dogs that attack, maim, kill humans. They get returned to the owner with a polite request to maybe please contain the dog in future.

So ya know, let's live in the here and now. Man killers haven't been culled for at least twenty years now, so let's not make them make us waste time on that point?

I have an uncle who was known far and wide for his fighting dogs. He didn't cull, he sold them to idiots. He said one time that he spent good money on those dogs, why not get a little bit back. And some people know so little that they think human aggression translates into dog aggression so they are the fools that buy them.

"so let's not make them make us waste time on that point?"

Hell YEAH we're going to spend time on that issue, and many others too.

Getting a little too close to the bone here, I think. They don't like it when this stuff gets out. Attempt to throw off track.

Extremists are rarely honest or conduct themselves in a moral manner this goes for the pit bull haters and the pitbull lovers. Blind love and hate usually come from stupid people. Like craven for instance.