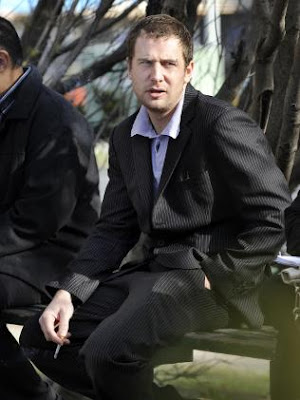 SCOTT CHAPMAN
8.23.10 australia the three pits belonging to SCOTT CHAPMAN that killed 4 chihuahuas and a maltese have slipped through a crack in the system. during the long battle to save the frankenmaulers, CHAPMAN decided to give his mutants away but not before running up almost $70,000 in legal fees, kennels fees and DNA testing fees. i don't quite understand how this could happen and thinking about it, hurts my head.
8.23.10 new orleans two pit bulls busted through their fence to attack Annie, an aussie mix. Annie was stitched up and her owner will must have hand surgery. 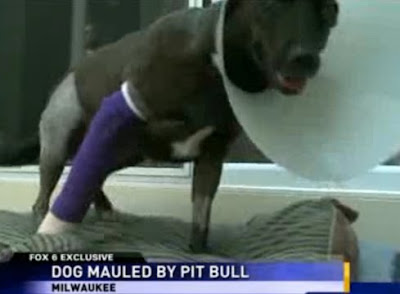 8.24.10 milwaukee, wisconsin a woman and her 4 yr old shepherd mix were attacked by a pit bull. two neighbors came to their aid and were also bitten.
8.24.10 sequim, washington the pit/mastiff mix belonging to HOLLY PRITCHETT of East Fir St, jumped the fence and attacked the neighbor's black lab. the neighbor shot the frankenmauler. it died at the vet the next day.
8.24.10 amarillo, texas a rottweiler and pit attacked and killed 1 pony and 8 goats.
8.24.10 nipomo, california a pit bull attacked 2 jack russell terriers. a landscaper came to their aid and was bitten on the face. the frankenmauler ran to a home. the homeowner said the dog didn't live there anymore. that excuse card has been played, unsuccessfully i might add.
8.24.10 palm beach gardens, florida a woman was in her back yard with her 2 mastiffs and a pit bull. one of the mastiffs and the pit started a scuffle. she tried to separate them and the mastiff attacked her (wonder why didn't the nanny dog save her?) a neighbor came to her aid and was attacked by the OTHER mastiff. both of them were chewed up. the pit nutter turned her attacker over for a dirt nap but there's no word what will happen to the mastiff that attacked the good samaritan.
8.24.10 brownstown, michigan this is being reported as an english bull dog attack on bouvier but i suspect this is an ambull.
8.24.10 hollister, california 2 rampaging mutants have received their much deserved dirt naps after killing 3 cats and dog. in the first attack, a pit bull and his chihuahua pal BUSTED through the fence and attacked/killed the cats. the mutant was picked up by ac and the chi was found dead in the road. in the second frankenmaul, a loose mutant attacked a chihuahua being walked by its owner. the chi died the next day. 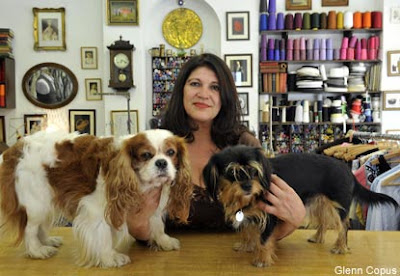 Munever Ibrahim lost part of her finger and one of her dogs. 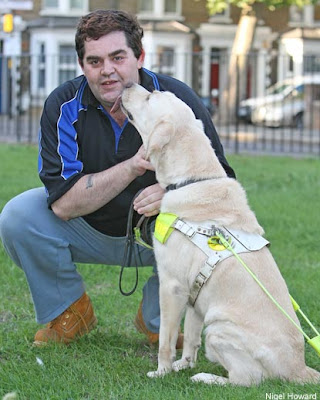 Barrie Hopcroft and Bailey, both injured by weapon dogs.
8.25.10 UK people are getting fed up with these weapon dogs. deputy mayor Kit Malthouse is demanding the government get tough on frankenmaulers.
8.25.10 oakland county, michigan a pit bull jumped through a window and chased a woman and her dog. a neighbor saw it and let her in her house before it could attack. the good samaritan said the dog is a constant problem. the pit nutter received several citations and the pit bull is in custody. 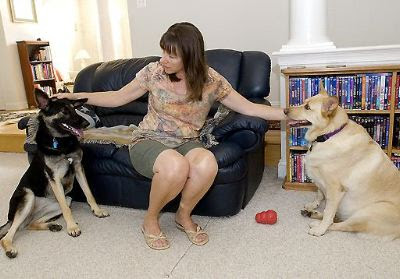 Roxie, Carole Levy and Layla
8.25.10 brookeville, maryland Layla was attacked by 2 pit bulls during a walk with her pack. turns out the pit bulls were just "visiting", so the mutants are off the hook. two days before a pit bull jumped a fence to attack another dog. that owner was cited and that dog was declared potentially dangerous. 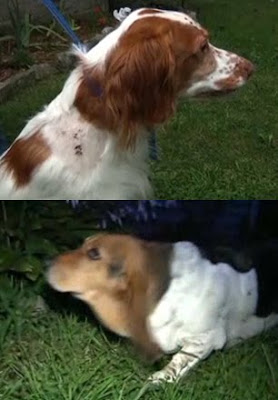 8.26.10 ansonia, connecticut 3 loose pit bulls have been attacking animals and terrorizing people. at least one of them has been captured but not before injuring these 2 dogs and a bull mastiff/pit mix.
8.26.10 UK a 40 yr old woman was walking her dog in the park when a staffy bull launched an attack. she pulled the mutant off of her dog and it redirected on her. so much for dogmen culling man biters so they can handle them safely in the pit. a white male, 6 ft, slim build, dark brown, flat short hair in his mid 20's to early 30's grabbed his dog and fled with 2 other white males. 0845 33 00 222 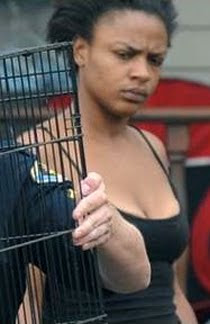 22 yr old pit nutter TIFFANY STAPLES
8.26.10 stroudsburg, pennsylvania the dogs that have been terrorizing animals and people, killing cats and attacking an officer were shot by police and then euthanized by DR KARIN-SUSAN BREITLAUCH. STAPLES refuses to believe that her wiggle butts could do these horrible things. look at her face. blech. "My babies," Tiffany Staples said sadly, as they were driven away in the back of a pickup truck. STAPLES doesn't even know where her "babies" are half the time. Elizabeth Staples, the matriarch, said they let the dogs go to the creek to play and relieve themselves but they always returned. well, almost always. last june STAPLES was cited for animal cruelty when police had to repeatedly taser her dog during an aggressive dog call.
don't worry TIFFANY, you still got your frankenmaulers' evil little spawn to replace them.
8.26.10 UK Oliver a 9 yr old yorkie was attacked by a loose staffy bull. a week later, he died. the dog warden paid the pit nutter a friendly visit and "advised him to keep his dog on a lead and muzzled when outside." 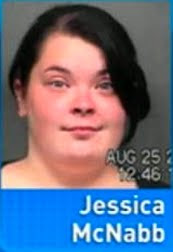 8.27.10 columbia, tennessee 18 yr old JESSICA McNABB tied a rope around her boy friend's golden retriever, tied the other end to her car and drug the dog. she then allowed her pit bull to attack it. the dog survived and this fucktard has been charged with a misdemeanor animal cruelty. 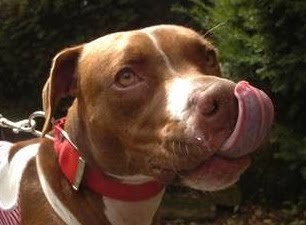 HAZE says, yum, more kitties please!
8.27.10 long pond, pennsylvania JESUS RIVERA admits that he was walking his ugly dog HAZE when he got a whiff of the neighbor's cat and got away from him. the neighbors shot HAZE, unfortunately not fatally. and now RIVERA says his ugly frankenmauler was "shot for no reason". the shooter, Michael Dean, has a history with the RIVERAS and their vicious dogs. ten years ago the RIVERA'S rott attacked their german shepherd, Zeke, he lost an eye. another neighbor terrorized by the pit/rott combo, Ed Hall, said the pit and rott run loose at night and go after the his ponies. complaints have been made about the RIVERA'S dogs. the dog warden told them to shoot the dog. JESUS RIVERA and his spawn JIMMY deny their dogs have ever attacked another animal. the Deans found their cat mauled on the side of the road. oh by the way, i failed to mention that HAZE was INSIDE the Dean's home attacking the cat. 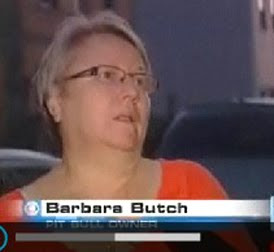 8.27.10 bloomfield, pennsylvania another victim of BARBARA and HENRY BUTCH'S ugly frankenmauler spoke out about HEATH. Vinny Marz was bitten when HEATH went after his dog. the neighborhood is justifiably upset that the mutant is not dirt napping. BARBARA BUTCH claims to be sick about the attacks. i don't believe her. "He gets out. I can't explain. He runs when there's a crack in the door." she plans to send him to school and get him neutered.
you know how people joke about kentucky hillbillies. i think they are focusing on the wrong state. 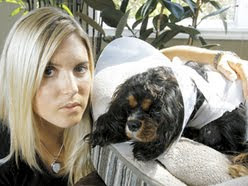 Amy Weatherall and Rawson
8.28.10 calgary, canada Rob Weatherall was walking Rawson in an off leash area when 3 pit dogs attacked the 1 yr old king charles cavalier spaniel. the pit nutter rushed in and grabbed dogs and said he was sorry, "his dogs have never done anything like that before". that's what you call TURNING ON. Rob rushed his dog to the vet and is now asking the owner of the frankenmaulers to step up and cover his $1500 vet bill. control officer Greg Steinraths claims to be investigating the attack and stated “There may be two sides to the story, we want to see what precipitated it.” we need to make sure that Rawson didn't give the hyper sensitive eager to please most loving wiggle butts EVER the evil eye before drawing any conclusions. here's what this moron looks like. 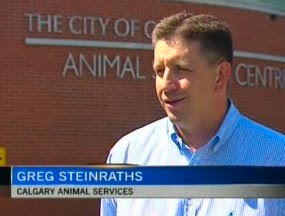 the dog attacks that are never reported by the media
8.25.10 mobile, alabama a pack of dogs attacked 2 miniature ponies. they later died. the police reported them as pit bulls but the omniscient vet says NO. in this time of extreme nutter infiltration, i tend to believe the police over veterinary staff. the dogs were euthanized.
Posted by scurrilous amateur blogger at 8/27/2010

I'd like to know what you have to do in Tennessee to get a felony animal cruelty charge if that was a misdemeanor offense. Are there felony charges for UGLY? Because in that case, McNabb needs 20-life. I now need an icepick to stab out my eyes. What a knuckle dragging mouth breather!

The Nutter's in Animal control would prosecute to the fullest if one of their precious Pit Bulls was the subject of the torture!

This Dogwoman needs locking up!