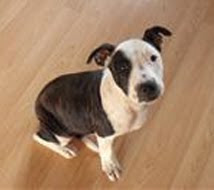 9.13.10 UK the magistrate sentenced the frankenamuler to a dirt nap and his narcissistic owner to a 3 yr ban on owning a dog. 30 yr old AMY STEVENSON clung to "but he's great with kids" bullshit after her hideous mutant savaged three dogs. it seems little miss pit nutter is unable to hold on to her fur baby when his DNA kicks in at the sight of another dog. loyal NEO made his mum proud. 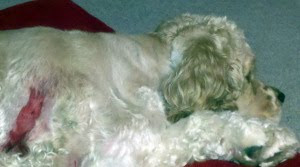 9.17.10 baltimore, maryland this 22 lb spaniel was attacked while walking with her owner. the victim reports that the offending pit bull has a history of attacking other dogs. a dog bred to fight dogs, fighting other dogs. no big surprise there.
9.17.10 UK 71 yr old Iris Jones came to the rescue when a pit bull attacked Sooty, a 9 yr old pony being ridden by a 14 yr old. the pony received "horrific" injuries. everyone is calling her a hero, Jones replied "The police are calling me a heroine because nobody else would tackle this pit-bull. I just acted out of instinct." just like the dog. thank you Iris.
9.17.10 lompoc, california the Ness family dogs have twice fallen victim to their pit bull. in the first attack, the pit bull chewed through the wood fence and jumped over a second fence to attack their male yorkie. it later escaped through an open door and attacked their female yorkie. the dog still lives next door.
9.18.1o niagara falls police blotter CHARGED: Paul J. Janese, 28, 437 71st St., was charged with having a dog at large about 2:45 p.m. Saturday, according to Falls police. Janese was charged after a neighbor said Janese’s pit bull jumped into their yard and attacked their 4-year-old beagle. Officers said the beagle suffered wounds to its left ear. The neighbor said the pit bull has jumped into their yard in the past. Janese told police it happens often with “Lexi,” the report said. Officers did note that the pit bull was licensed and had her shots. 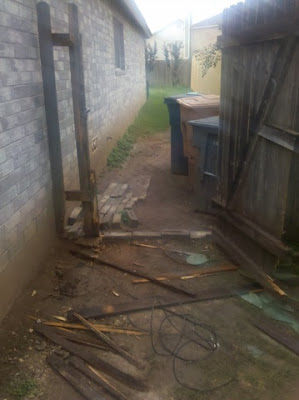 the loyal pits were only trying to please their owner.
9.19.10 austin, texas FIVE frankenmaulers broke out of their property and into a neighbor's property. they destroyed the neighbor's fence to get to 2 cattle dogs. a neighbor saw this (the dogs are known problems) and called 911. when the police arrived they shoot and killed 2 of them and shot and injured another 2, the fifth dog was captured and the owner signed him over for a dirt nap. one cattle dog is at the vet and one was missing for a day. she is home now and uninjured. and according to this link the dogs have also attacked people.
9.19.10 arkansas a pit bull went on a poultry rampage. the owner of the chickens was bitten and he shot the dog.
9.20.10 UK a 76 yr old man and his chihuahua were bitten by a HIDEOUS mutant during their afternoon walk. the psychopathic pit nutter tried to flee with frankenmauler. when a relative of the victim attempted to detain him for the police, he ordered the mutant to attack. both men required surgery for their injuries. the chihuahua suffered a broken leg, bruising and wounds to his paw and stomach. the pit nutter is of mixed race, in his twenties, with dark cropped hair, wearing a red hooded top with yellow writing on and dark jeans. contact Derby East CID on 0345 123 33 33 or Crimestoppers anonymously on 0800 555 111. 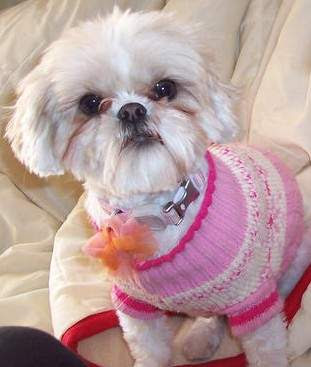 rip Bella
9.20.10 hazlet, new jersey the neighbor's pit bull mix crashed through the fence and killed the 7 lb shih tzu.
9.21.10 UK a pit bull killed a yorkie during a walk, the pit nutter fled. the mutant is described as an ugly shade of white with hideous grey markings and wearing a pukey pink collar. the pit nutter is described as late teens, dark complexion, curly hair, beard, 5'8" to 5'10". turn him in.
675-9171 or Sudbury Rainbow Crime Stoppers at 675-TIPS 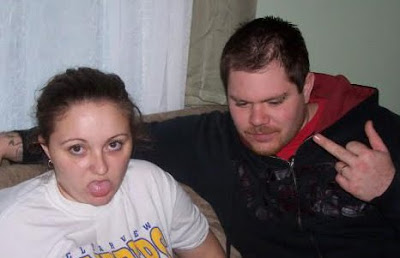 9.21.10 lorain, ohio TONY HRPCHA and CALUETTA HILL'S 2 frankenmaulers somehow got loose and mauled a cat. 911 responded and shot one of them, unfortunately it survived. this is not their first dog violation and not TONY'S first run in with the law. actually, the entire HRPCHA family is no stranger to law enforcement. in addition to his current slew of citations: dog at large, no rabies, no license, no dangerous dog regsitration, TONY JR has 2008 dog at large violation, confine dogs, DUS, driving while suspended and credit problems. even TONY SR has a history of domestic violence, driving while suspended, and drunk driving, as well as "minor" traffic infractions. HEATHER HRPCHA was charged for dog at large in august and was fined $200. welcome to the dregs. 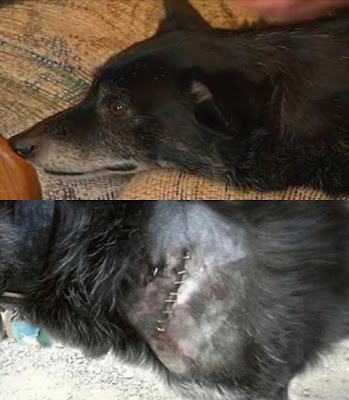 9.21.10 miami, florida 83 yr old Rogello Castillo was walking his Candela maltese when CHRISTINA MORENA'S ugly 9 month old frankenmauler KING bolted out the door to seize the opportunity to flex its genetic muscle. the maltese was injured and Castillo fell and his head and possibly suffered a heart attack. some of these news outlets are calling this a dog fight. for some reason, it has become fashionable to describe these instances as "dogs got into a fight" or "a fight broke out". that is absurd. when an altercation involving an ugly mutant and a 10 lb dog occurs it is called an ASSASSINATION attempt.
more links:
miamiherald
justnews.com
wsvn.com 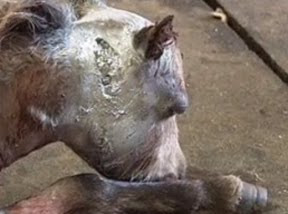 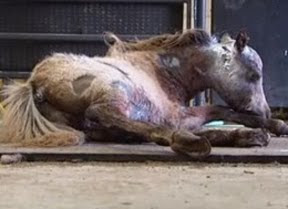 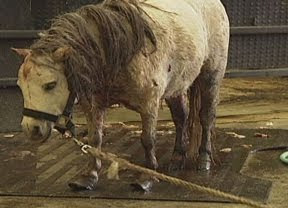 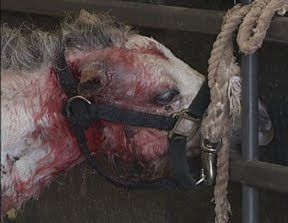 9.22.10 terry county, texas one miniature horse was killed and 3 were seriously injured after a "scuffle" with a pit mix. the dog was still in the pen when the owner arrived and he shot it. i hear a candle light vigil is scheduled for the pit bull and the east coast no kill freaks have started a blog and are taking donations to help save more frankenmaulers from fear and ignorance. update the 4 month old foal died.
9.22.10 wilmington, north carolina KALOB CROMARTIE'S ugly mutant got loose and attacked a woman's dog. the pit nutter claims his dog "wouldn't hurt a fly" and is upset that the dog court found SADIE guilty of approaching a person in a vicious and terrorizing manner on someone else's property and ordered that she be spayed.

9.24.10 pasco, washington Lara and Jake Neiffer were walking their little dog Gracie Mae, when a mutant pit dog started to follow them. Lara picked up her dog and the dog lunged and ripped Lara's earlobe off. Jake grabbed the dog from her and he was bitten on the hand. there is no leash law in the county and the pit nutters can not be cited for dog at large but the county sheriff filed to have the frankenmauler declared dangerous. if the court agrees, the nutter will have to cough up signs, kennels, fencing and $250,000 insurance. and the Neiffers are considering a lawsuit. please do!
ps Lara, skip the pepper spray, it only pisses them off. get a gun. 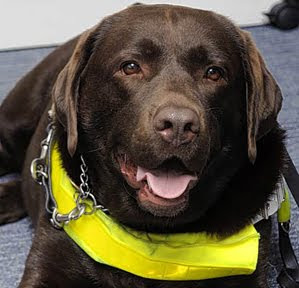 9.24.10 UK Neela the guide dog was honored for her bravery after she was viscously attacked last october by a nanny dog who was only trying to please his proud owner.
see also links one and two
the attacks the media never reports
9.16.10 florida a great dane and a german shepherd ran into (note there was no fence busting) and attacked 2 dachshunds, killing one and injuring the other. the owner of the dachshunds was injured when she tried to save her dogs. the two killers were accompanied by a lab but it didn't participate in the deadly "scuffle".
9.20.10 dayton, ohio a rott attacked a pit puppy. all dogs were owned by the same person, a back yard pit breeder. the owner was cited and he sacrificed the rott to the authorities.
Posted by scurrilous amateur blogger at 9/24/2010

That anybody could actually hold a candlelight vigil for any animal that mauled ponies so horribly is a disgusting indictment of the sociopathic nature of the pit nutter. Where are the vigils for the ponies? Where is the concern for their owners who lost valued companions and the surviving victim animals forever scarred physically and mentally by their terrifying experience? People living where these sociopaths are holding this vigil ought to drive them off and publicly shame them for their idiocy.

I've made a facebook page that hopefully will educate more people on the issues at hand with pitbulls!

Feel free to spread the word or promote articles I could link to. I'll be sure to

Thank you anon! Horses attacked by pit bulls sometimes live, sometimes die. It depends on the age, size, and physical condition of the horse at the time of the attack. Horses confined in stalls or pens will die every time. Horses with the option of running will sometimes live. The ones that live are never the same. They have violent flashbacks, they may learn to tolerate quiet dogs but running dogs trigger extreme fear or even aggression. These horses are never safe to work around. You are absolutely correct, there is no vigil for the dead or mauled horses. The owners of these horses are accused of being vindictive when they file lawsuits to recover the costs of medical treatment and the drugs that these horses will require for the rest of their lives. "After all, it was just an accident, it was just animals acting like animals do." Accident... my ass.

anon 8:17 wow, thank you! i was thinking about starting hubpages just today. facebook didn't even hit my radar. wow!

I thought it would be a great way to spread the word as anyone who comments on any page will have said notification pop up within their facebook page, so it's a great way to get the word around.

If you want, you can (and should) create one and I'll link it to my page. Just be sure toe keep profanity and potentially offensive material off there. People are notorious for flagging "danger" groups because of this.

Just keep civil and will be alright.

feel free to email me crvndesires@gmail.com

Are you sure this Anonymous isn't shittin' you? At Facebook, the only 'Truth About Pit Bulls' pages I find are pro-pit bull and full of the usual shit.

See also for the weird human side:

Nah man.
I checked out that facebook page and it seems pretty legit.

Most of their references are from this site, official reports, and dogsbite.

It is stunning that Neela was able to keep working. That was a brutal attack that lasted a long time. Neela is on heck of a dog!!!

You missed one from the UK:
David Sowden and his wife, Debbie, were taking their springer spaniel Sebastian out for his first walk on Clifton Ings when a black Staffordshire bull terrier raced across the field and attacked the puppy.

thanks. i added sebastian to this week's tally.