the wizard of pit 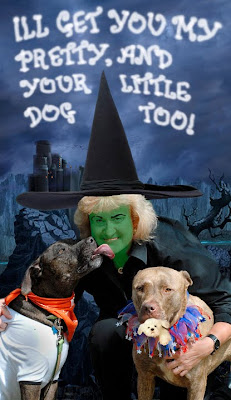 The Nature of the Beast

Ledy Van Kavage’s first and best friend was an American Pit Bull Terrier (APBT) named Boody, a stray puppy her family adopted when Ledy was 4. Boody was a partner in all of Van Kavage’s childhood exploits. She recalls hiding out with Boody in his dog house when she didn’t want to come indoors. But that was decades ago, “before the time of responsible ownership,” says Van Kavage of Maryville, Illinois, who is now the Midwest regional legislative liaison for the American Society for the Prevention of Cruelty to Animals (ASPCA).
Not only was Boody allowed to roam, he was never neutered, and he often fought with other dogs. Intact adult male dogs of all breeds are well-known to be more likely to fight than neutered males or females. Adding a biological imperative to a bully breed’s genetic programming is like pulling the pin on a hand granade. “I remember jumping into the middle of a dog fight when I was 6 and pulling Boody off another dog because someone had called the police,” Van Kavage recalls. “I didn’t want the cops to shoot my dog.”
Tragically, Boody’s propensity to fight and his unneutered status were his undoing. “He got in a fight,” Van Kavage remembers. “He was able to drag himself to our street, where he met me every day on my walk home from school. I found him on my way home. We took him to the vet, but he died of his fighting wounds. To this day I grieve for him.”

ledy pulled a few strings and had this article pulled from the internet. good thing i saved a pdf. click here to download your copy.
Posted by scurrilous amateur blogger at 9/22/2010

She may be a lover, but she ain't no dancer.

The people at the site above see a link between The Process and The Manson Family. The guy at the links below does not.

Here are the original chapters about The Process from The Family by Ed Sanders. I think some of the information has been restored in the latest edition.

More information about some of the people behind The Process/Best Friends.

Michael Mountain a.k.a. Hugh Mountain and known by his religious name Father Aaron, is the son of the founder of Granada TV, Sydney Bernstein. Michael Mountain co-founded The Process, Church of the Final Judgment with Robert DeGrimston a.k.a. Robert Moore or Moor a.k.a. Christ. The church first incorporated in Louisiana in 1968 and Michael has continued to this day to be the President. The Process has changed it's name several times and is now Best Friends Animal Society in Kanab, Utah. www.bestfriends.org Here you will find more than 20 of The Process founders, Mary Anne De Grimston and her inner-circle, living on a 23,000 acre ranch called Angel's Canyon (Manson called his ranch Devil's Canyon.)

When Sydney Bernstein died in 1992, Michael Mountain became an heir to his fortune. Over the years he has contributed large amounts of money to The Process Church. To this day, much is written about their connections to the Son of Sam murders, the Manson murders, the Zodiac killer, human and animal sacrifices and many more heinous crimes. Whether or not these accusations are true is still under investigation...

Public records show The Process, Church of the Final Judgment - May 18, 1974 - Name Change, The Foundation Church of the Millennium. This wasn't a splinter group and records show the corporate name changed several times over the years and is now Best Friends Animal Society. Most of the same people are currently listed in the documents, no one new has been added, and they continue to hold the non-profit corporation established in 1968.

Ah, the childhood reminiscences of Bledy...does anyone else read that and wonder how many children in Bledy's neighbourhood lost THEIR "first and best" friends to Boody? I'm certain that, being a pit, Boody won most of his fights. How many adults still grieve for their childhood pets, lost in the the jaws of that roaming pit bull?

God, how I would love to hear an account of Boody written by someone who lived in that area at that time.

Ledy VanKavage supports a pit bull's right to rip apart other pets. She fights against dangerous dog designations for pit bulls that unprovoked kill other dogs.

Ledy VanKavage supports animal abuse, as long as pit bulls and their owners do it.

As far as Best Friends, did you know that all the sales from their merchandise (Tshirts, cups, tote bags, other clothing, vitamins, all that gift type stuff) is owned by a PRIVATE company that cashes the check.

The Best Friends charitable portion and sanctuary does not get supported with their gift and merchandise sales.

It was used for the private accounts of the founders. Is Ledy now profiting from the merchandise sales?

Michael Mountain appears to have gotten his hands on some kind of email list, maybe Best Friends when he got booted, and is sending out emails now begging for money and claiming he runs some sort of charity for animals with zero details.

If you remember, he was printing propaganda for Rick Berman, lobbyist for dog fighters, before he left Best Friends.

The corruption that whirls around Best Friends is a tornado.

They also are not telling donors that they have gotten rid of hundreds of dogs in the past few years that they promised to care for eternally.

I too would be interested in hearing from Bledy's neighboring dog owners.

The creepiest part of this story is that she voluntarily shared it.

She is so self-absorbed that she can't conceive that readers might realize that if Maryville Il. housed only VanCarnages and bloody Boody's, Maryville Streets would be flowing with blood and littered with gore. There was never a time that decent people appreciated their pets mauled to death, I am pretty sure.

She's so egocentric that she can't conceive that readers might empathize with the police calling neighbor who obviously didn't share the VanCarnage's sociopathic values.

She is so narcissistic that she doesn't realize that she clearly depicts her parents as being negligent sociopaths.

Here's a description of the Process Church/Best Friends Animal Shelter history from the Best Friends website. Even in their own words, when they don't dwell on the fact that they believe Jesus and Satan will one day hold hands with Lucifer and dance around, tra la la, they still sound like KOOKS.

And in that piece they keep emphasizing that their faith is based on the Golden Rule...Do unto others...Highly ironic for people who put pit fighting dogs in our neighbor's homes.

That's the link to the Best Friends pages describing their history.

There are profiles of a few of the original cult members. One started a "clown ministry" and another one believes she has a gift that allows her to commune with animals and she feels a kinship with mosquitos.

A kinship with mosquitoes? That's about right. Those people are vampires, leeching off society.

I don't get it...back then you had to be "educated" that allowing your fighting breed to roam around and tear up other dogs was wrong?!?

I think she lives in her childhood home in Ohio near the Missouri border.

Missouri. What does that tell you?

The civilized people probably moved away long ago to get away from the stain in the community.

Sorry, I think I meant Illinois?

When Michael Mountain stepped down as CEO in 2009 he created Stubbydog. There was financial shennanigans in Florida due to that group, a pit bull pushing, child endangering, obfuscating propaganda organization registered in Scottsdale Arizona. He also is involved in LOHV which is a vote influencing organization based in NYC. League of Humane Voters. He's also working on The whale Sanctuary Project with a marine biology teacher that is or was living at the sanctuary in Angel Canyon. That's where her address was listed as.