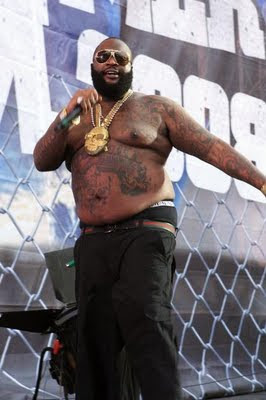 The neighbor of correctional officer turned rapper Rick Ross, has filed a $15,000 lawsuit against him after his pit bulls escaped their kennel and killed her toy yorkie. The victim stated Roberts aka Ross was negligent and the pit bulls have gotten loose prior to the fatal mauling of her companion Banks. Roberts/Ross was cited for the attack and never apologized to his neighbor.

Roberts/Ross is no stranger to the legal system. In January 2008, he was busted for a gun and marijuana. In August 2008, Roberts/Ross was served with a lawsuit for assaulting a youtube entertainer and in June 2010, famous drug dealer Freeway Ricky Ross sued Roberts/Ross for using his name.

Here is youtube video of Rick Ross visiting a pit bull breeder to pick out a new dog. 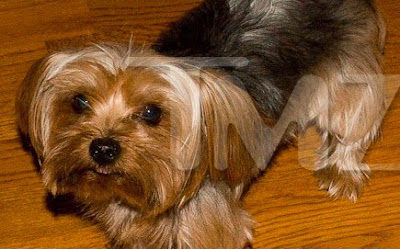 I hope she wins.

Rick's apparently too sexy for his shirt. Hey fucktard! Pull up your pants!

The decent thing to do would be to cover that body up. I suspect I have been emotionally scarred by the the photograph.

The guy is a jerk. There should be much tougher laws regarding dog ownership. Not which dogs you may own.

Some people should not have dogs ...or children for that matter !