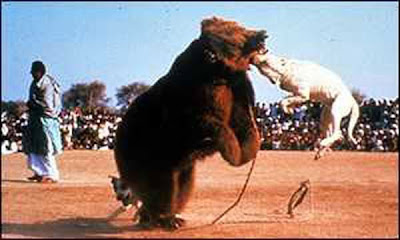 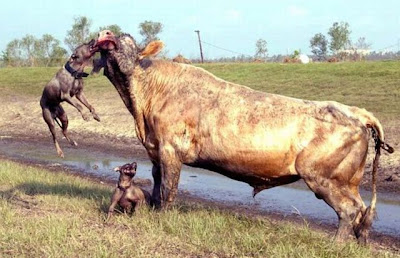 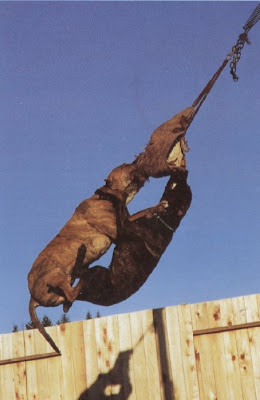 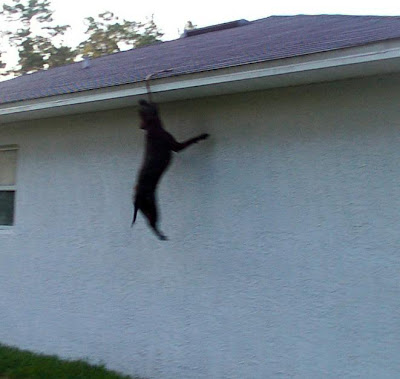 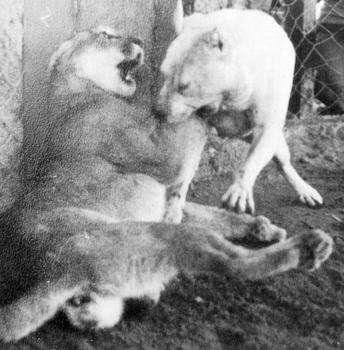 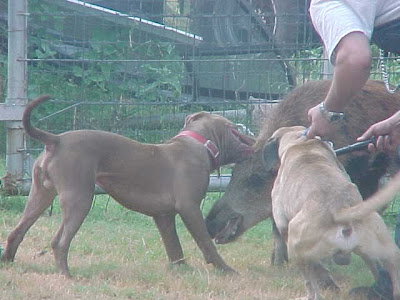 why would normal "responsible" people want those putrid, ugly mutants anyway ? this myth of the responsible pitter is more of the same crap that regular folk are supposed to accept or else be labelled ignorant or even racist .

pls folks , fight for your right not to be a fuck-up.

to convince us that their dogs are suitable companions and pets. Pits are in the class "dog" and share some characteristics with a nearby breed which is similar to another and on and on until you reach toy poodle.

Therefore, pits are just dogs. Dogs are all the same. It must be all how you raise them...yadda yadda yadda.

I'm thinking that the medium-size and somewhat generic look, was an advantage to dog men. If pits had a distinctive curly tail and color pattern, etc; it would bring the heat. Also, if they were really big (which would also make them harder to conceal). Plus, as you gain size you lose speed ordinarily. So, among dogs, pits might be the perfect size to kill.

Most nutters secretly love what these dogs can do. Then in public say something different. Disgusting.

Thank you for the continuum fallacy. They do that with attacks, too. That's how a scalping becomes equated with a single puncture from cocker spaniel.

I also completely agree that they secretly love what these dogs can do. If they wanted just "a big goofy baby," they'd get a golden.

these pit nutters have been spamming the auckland spca facebook page in new zealand.
Pitts and pitt type dogs are classed as menacing dogs here and alot of the breeds are banned from importing etc.As such the spca wont re-home them and always gived them a dirt nap.But some workers have said on the face book page when they worked at the spca they would put a different breed on the paper work so they could be re-homed.

And the nutters from Chained Dog Awareness in NZ have posted a photo off them taking their crap dogs,which are ex fighting dogs to the local dog park,they tell people its a ex-bait dog,but its not, letting them scare all the other dogs and owners
www.facebook.com/SPCAFRIENDS

Man jailed for using pitbull as a weapon
http://www.nzherald.co.nz/nz/news/article.cfm?c_id=1&objectid=10779325

Tim says he and his dog were set upon by a dog whose master was loudly telling it to attack.
“The owner of the dog kept repeatedly beating it, to try and psyc it into attacking us,” he says.

Surgery for boy attacked by dog

The 18-month-old girl underwent surgery on Saturday after she had been attacked by one of the family's three pitbull-staffordshire cross dogs in her backyard.

Ann Waker you have broken the LAW.Very lax of you to be walking a menacing dog in a public place. Menacing dogs must be muzzled when in public places and may be required by the council to be neutered. Menacing dogs
Councils can classify a dog as menacing if it considers that it poses a threat to any person, stock, poultry, domestic animal, or protected wildlife because of
any observed or reported behaviour of the dog; or
any characteristics typically associated with the dog’s breed or type.
Councils must classify a dog as menacing if it belongs wholly or predominately to the type or breed of dog banned from importation into New Zealand - American Pit Bull Terrier, Dogo Argentino, Brazilian Fila, Japanese Tosa.

Menacing dogs must be muzzled when in public places and may be required by the council to be neutered.
18 hours ago

Tuere Randall ‎@Ann Walker, perhaps the definition of menacing should come from the dog's actual behavior, not the breed. Breed specific legislation is wrong. And the whole point of the story is that this dog, despite everything that it has been through, is NOT menacing. Shar Peis were bred as fighting dogs in Tibet, I don't see anyone talking about them...
17 hours ago · 2

Pamela Kerr ‎@Ann - I see you have changed your profile photo to one of a menancing dog. Does it say anything about you I wonder? You seem hellbent on stirring things up. Of course you have never broken the Law? Why don't you do some charity work, ie work for the SPCA to get this hate and frustration you are obviously feeling, out of your system. You will feel better if you can channel your bitterness and anger into helping others.
16 hours ago

Pamela Kerr ‎@Jayne - hope you are not fazed by Ann's obvious animosity towards your beautiful Gio. Me - I would rather have a thousand Gios any day to one Ann.
16 hours ago

Jayne Staunton Not fazed by the comments one bit. We did have to have 1 pitbull at out doggy day out that had to be muzzled unfortunately as she is not good with other dogs (she was used for fighting) she is however, fabulous with cats, children and people. We are working with her to atleast try and get her used to other dogs without wanting to go at them. If we thought Gio was in anyway a danger to other dogs or people he would have worn a muzzle but working with these types of dogs you get to know them very well and we have enough experienced people within our organisation to know the signs of any dog displaying threatening or aggressive behaviour.
15 hours ago · 1

Shar Prasad He's gorgeous, i want one ♥
15 hours ago

Pamela Kerr Good for you Jayne!
13 hours ago

i like fish, of course you are free to continue to post these stories and comments here but i urge you to start a blog.

In this story,is something i would like to see
In Australia, the president of the Victorian RSPCA has called for the mass extermination of the state's American pitbulls.

It's nice to find a site you can trust.Visit Critterriddertexas.com this site was recommended by a friend so I tried it.They provide a Animal Control Texas, Rodent Control Austin, Bee Removal Austin and Wildlife Removal Austin at affordable price.

it's too late packhorse, the plague has begun.

obtw, usually i delete spam but this one is rather appropriate.

Images have a profound and resonating impact on the human psyche that is demonstrably distinct from the power/experience of the written word. For example, that is why all political movements and nations identify themselves through an image. I find the power of image absolutely fascinating.

Anyway, sorry, I hope I don't sound like a pedantic asshole, I didn't intend to lecture about anything. I'm just saying: those photos are worth a thousand words. That bear! That poor cow! And why in hell does ANYONE think it's cool or funny to see pit bulls swinging from spring polls?

Warning, this is hard to watch. A pit bull attacks a mutt brutally. The white dog gets away, finally, and doesn't appear maimed. Still, the dog screams and it might upset some.

Good video DubV, but as you warned, not the best compliment to my morning breakfast cereal.

I noted the smug and unapologetic expression on the pit's owner's face, too.

Hell, I know that I am a girl, and sometimes suffer from Nice Girl Syndrome (believe it or not), but always apologized profusely if my dog even crapped on someone's flower garden (and I picked it up, of course). And this douche doesn't even seem ashamed!

Note: I realize my statements are somewhat hypocritical, given the reality of factory farming. Just sayin'.

The gov't baits hogs out into the open and then has a paid sharpshooter take them out with a high powered rifle. The hog doggers are just sadists. Their toothless grin surely doesn't express "I'm so happy 'cause I just helped the environment!"

"The hog doggers are just sadists."


not only that, these fucktards are thrilled hogs became a nuisance. i suspect they helped them become a nuisance.

check out this putz who IMPORTS giant russian boar for the purpose of hunting. i've never seen these doogs hunt with dogs, i don't think a dogo could take one of these hogs.

WHY IS THIS EVEN LEGAL TO IMPORT GIANT SUPER AGGRESSIVE NUISANCE ANIMALS?

Their toothless grin surely doesn't express "I'm so happy 'cause I just helped the environment!"

LMFAO HAHAHA DubV, that is a hilarious and completely assessment. I would read the hog-doggers' explanations about the menace of feral pigs (their populations are 'out of control,' they cause property damage, they eat crops, they encroach upon native wildlife, they are destructive to local flora, they can be dangerous and aggressive to people and pets). Some of these accusations sounded potentially plausible to me (I know pigs really ravaged the Hawaiian ecosystem, for instance), but I remained skeptical because I haven't studied the feral pig issue.

What really set off my Bullshit Detector, though, was looking at hog-doggers' other recreational interests and lifestyle choices, and comparing these with their professed concern for local fauna and habitat destruction. Like, somehow I don't think most hog-doggers have recycle bins and give to the Sierra Club.

It reminds me of those filthy-rich Safari Club International assholes (we hosted their annual Convention in my old town; I know of which I speak) claim that shooting captive rhinos ensures the survival of the species (because apparently, the only justification for protecting an animal from extinction is whether humans desire to kill or eat it. Safari Club to rhinos: "Your magnificence as a taxidermy trophy in my living room ensures my interest in preventing your species eradication. I would not want to deprive my progeny, or my wealthy friends, of the opportunity to kill you, chop off your head, and mount it above the fireplace!"

Arrrgh sorry for the tangent! You nailed it in a sentence, DubV. It is a good writing skill to have.

"Hunt or be Hunted." As if it was a legitimate competition, and as if any terrestrial animal in the world was not defenseless against human intellect and modern weaponry.

this is the one that really gets to me:

"Two Monster Boars have been Terrorizing Bear Mountain for the Past Couple of Years - Until these Two Young Men were Transformed into Hunting Heroes! What would you do if the tables-were-turned and these Savage Beast Hunted You"

i am all in favor of killing non indigenous nuisance animals ("dangerous" or not) BUT THEY IMPORT THESE FUCKERS!!!

my comment above almost looks like a nutter wrote it. i really need to close some browsers and apps and focus on one thing at a time. LOL!

No matter how awful the russian boar hunters are, they look almost saint like compared to hog doggers. The russian boar place at least uses modern weapons, not dogs and knives that protract suffering. Not a defense, just putting hog doggers in perspective.