that the state of california has a ban on ferrets?

yep. the state prohibits their ownership.

well, that the state's official party line but rumor has it that those occupying positions of power are just mean, ignorant racists. (lola brand and colleen carrigan are feverishly working to substantiate these rumors) 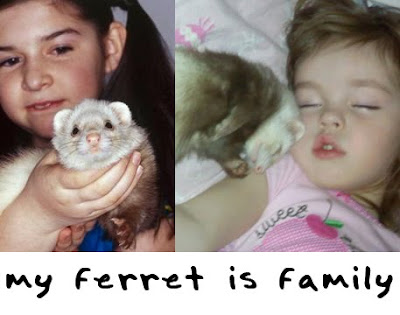 yep. ferrets get a badrap. the media's hate campaign against ferrets has been quite successful according to the golden state ferret society. there have only been a dozen cases of rabid ferrets in the last 300 years while DOGS "kill 17 people per year and account for thousands of rabies cases." (these numbers are now obsolete. yearly dog bite related fatalities have just about doubled since the pit bull's status was upgraded from villain to victim.)

yep. and ferret owners are forced underground to live in shame. they have formed clandestine groups and are gearing up for a fight. they are tired of the discrimination and threat of $1000 fines, 6 months in jail and the confiscation of their misunderstood FAMILY MEMBERS. ferret owners want to enjoy the same perks as the whiny dangerous dog owners; education campaigns, lenient laws, warnings, citations with fines reminiscent of the 1940's and of course pro bono lawyers with unlimited access to the court of appeals.

the responsible ferret owners have launched a facebook campaign, care petition and hired guerrilla economics to produce bogus statistics and sleazy lawyers to speak at california's next legislative session. they also received advice from seasoned pit bull advocates: until they can officially scorch california's earth call them rabbit mixes and form a scientific sounding ferret fanciers research council and website to begin the shameless promotion of nanny rabbit mixes, blame chinchillas and the weather. 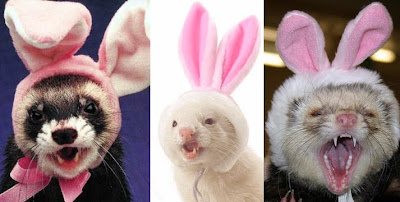 according to Chris Lewis:


But it's important to remember, that even the most pessimistic statistics on ferrets show that a ferret is about a thousand times *less* likely to cause injury than a dog. Indeed, every year there are hundreds of very serious or fatal dog attacks in the US alone. Worst case statistics show approximately 12 ferret attacks ever recorded in the US.

I am in the process of filing the appropriate paperwork to incorporate the National Ferret Research Council, the NFRC. It just has to be done, the injustice is simply too great....

There has already been a study done that shows that domestic ferrets don't survive long in the wild...so the idea that they could escape and form colonies to threaten domestic wildlife is ludicris. Ferrets aren't chasing neighbors down the street and mauling them. Ferrets aren't routinely putting children in the hospital. Yet public authorities in California regulate ferret ownership because they think they are DANGEROUS?

Dangerous? No. A little stinky? Possibly.

A breed of dog responsible for a disproportionate number of serious attacks on people and other domestic pets, including fatalities, should remain unregulated....but lets harrass the ferrent owners. That makes sense.

Ut-oh. I feel an, "All in how a ferret is raised," debate coming on ;) And the ferret folks ain't gonna like the Calif Dept of F&G quote from Harding, (1915.) "To hunt, drive and kill is a ferret’s natural instinct and disposition."

I searched to no avail, but somewhere out there is a hilarious clip of Johnny Carson with a handler and ferret. The ferret clamps on to Johnny's finger and the handler says wait, he'll let go. So they wait. Finally, Johnny, who's obviously in pain, rest his forehead in his left hand and holds up his right hand as the ferret continues to dangle from his finger like a little pit bull weasel. It was truly a great moment in Carson history.

As I recall, F&G's primary concern was escape of domestic ferrets and cross breeding away the native black footed ferrets.

Has anyone kept a ferret? Do they make good pets? They are very peculiar-looking critters. I can't decide whether they're handsome or ugly.

They've been domesticated for a long time, though. One of my favorite portraits, Leonardo's Lady with Ermine, features...well, a woman with a white ferret.

i knew someone who did and they smell horrible.

good one dude. i bet ledy spin the nurture argument.

The manuscript for The Weasel Placebo has been submitted for publication.

Why am I laughing so hard? Why are pit bulls still not banned?!

"Blame the deed not the breed." chant worked for pit nutters for so long (but not anymore)...why not for the Ferret?

So sad to think a Ferret gets banned but not pit bulls.

ferrets may not be sweet and loving and gorgeously handsome and wonderfull with our beautifull children . and although ive never heard of anyone being licked to death by a brindled ferret , i dont think we should be condemning a whole race of fur people. this is genocide of the ferret people !! please dont cross the street when u see a red-nosed ferret approaching . ferrets have feelings too , just like frankenmaulers.

One time my husband was bit by a ferret at his friends house when the ferret got out of his cage....From my understanding my husband shed a little blood and it was patched up with a bandage.

If a pitbull had gotten a hold of my husband we may have never even met.

These people are ass backwards.

i just published several comments from the other blogs that landed in spam over the last. sorry all.

all ya ferret haters should educate yourselves . ferrets are the nanny dogs of the weasel family. just look at the pictures if ya dont believe it ! i had a ferret for 3 years and it was the sweetest rodent you could ask for . some of those pet rats and gerbils and chinchillas are way worse than any ferret and anyway its all down to the owners , there are no bad ferrets just bad kids and parents .

I'm the owner of the photo of the angry bunny ferret. I don't mind you using it (especially for the purpose of dispelling that stupid California myth) but it would be nice if you credited me. "Angry bunny photo, copyright Barb Carlson" or something like that.