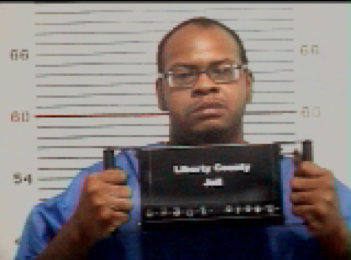 texas LACHAIN DEVER'S loose pit bulls attacked a pony. witnesses say DEVER watched the gory show from his porch. other neighbors saw this and called 911. the woman told the 911 dispatcher that she was going to shoot the dogs to save the pony. they told her no, wait for the deputies to show up. the deputies showed up and photographed the dog's attacking the pony before intervening.

the pony was in very bad shape due to it being tied up and unable to flee or defend itself. it suffered severe injuries to it's body, legs and neck. witnesses say its intestines were hanging out. the pony was killed on the scene. LACHAIN DEVER was arrested and charged with 2 counts of animal cruelty and the dogs are in fucking quarantine when they should be dirt napping.

at the link above, there is an audio interview of the woman who called 911. 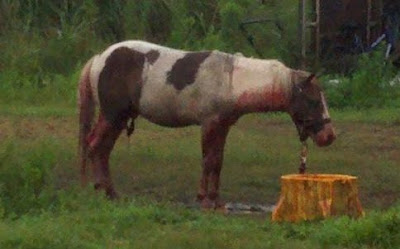 for future reference, for all pit bull attacks, other than the darwin kind (in that case just grab your video camera), don't alert the police of your intention to kill the dogs, please JUST DO IT.

That can't be right - I thought the gun laws in Texas made more sense than that.

I'd think in Texas it's very justified to shoot those pit bulls just for being on your property.

Pit nutters will start claiming the pony provoked the attack. Just wait for the excuses on this one.

That picture is very hard to look at, but that's what pit bulls were bred for. It's what they do. If those pit nutters get those dogs they will surely be called a cattle dogs.

I can't believe the 911 dispatcher told her not to shoot the dogs. That pony might still be alive.

She must be a pit bull owner.

Similar thing with a 911 dispatcher and pit, not quite as bad though.

In an attack like that, the thing to do would be to shoot and THEN call 911. Seconds count and in those seconds a human or other animal could be seriously injured or killed.

IANAL, but its my understanding that shooting a dog (not just a pit bull) that is harassing or attacking livestock is legal in most jurisdictions. This is yet ANOTHER case of the interests of a couple of individual dogs being put ahead of everything else.

Its also my understanding that the "advice" of a 911 operator is not binding (though someone with more legal knowledge than I may be able to elucidate me on that).

texas : no country for old horses or anything that bleeds. the nice man just watched while his mutants went to work on the horse ? i feel the "n" word coming on . usually its the "c" word.

What an awful way to die.

When you say the pony "was killed" on the scene, do you mean that it was euthanized by humans, or that it died of its injuries?

At a place where I work, a girl I know talked about how her pit bull fucked up a deer. She sounded impressed. It made my skin crawl. I asked her why she let that happen and whether it wasn't animal cruelty. She said that dogs were predators. I said no they were not, they were more like predator-scavengers like bears, and even if they were hunters, who gives a shit. The dog eats kibble, man.

Anyway, I hope that they pony's owner can punish this nutter.

He is a villain of the devil's law
He is a killer just for fun
(Fun, fun, fun)

That dog is game and unpredictable
He's got no conscience, he got none
(None, none, none)

But mama, I'm in love with a pittie bull!
And this type of love isn't rational,
It's criminal.

I believe it is legal in all 50 states, as well as most foreign countries, to shoot any dog that is harassing, much less biting, livestock.

I can't believe people take time during a pit attack to make a video, take photos, call 911 and "explain the situation" or try to reason with the dog owner, etc. The clock is ticking! Just kill the dog--if you have the means to do so--then get ready to defend yourself against the bereaved pit owner too...

"When seconds count - law enforcement is just minutes away. In some cases, 30-45 minutes or more. SHOOT ALREADY!

If I were the pony owner, I'd be on the phone to a public litigation attorney and the jurisdiction that instructed someone NOT to shoot would be getting SUED. Win or lose, we'd be in court demanding an explanation as to what rationale was used to stop someone from intervening during an attack, particularly when the law specifically allows this!

And I'll add, a ‘bereaved pit owner’ should take stock of their reality. If someone's animal has been attacked by their pit bulls and they've already got a gun with a warm barrel in hand, who should take cover? The pit owner should get the fuck out of Dodge and not even consider returning to the area until they've abundantly apologized and allowed for a cool down period.

This one really brings tears to my eyes. Poor, defenseless, pony. Heartbreaking. I hope the son of a bitch who watched his friggin mutants tear that pony up spends some time in jail, and may his mutant eat his balls off.

These attacks make me angry and sad, beyond words. I can't wait till shit bulls are banned nationwide!!!!

"Its also my understanding that the "advice" of a 911 operator is not binding (though someone with more legal knowledge than I may be able to elucidate me on that)."

I don't think 911 dispatchers should give out advice on things that cannot be ascertained over the phone and involve the lives of innocents. Let's say someone is acting crazy and you call 911 and state that what you see and that you have a handgun. The 911 operator says "don't shoot anyone". The crazy person then starts attacking someone with an improvised weapon and you shoot them. If you are charged for shooting them, the 911 dispatchers potentially bad advice would be used against you in a court of law by a zealous prosecutor, I feel quite sure.

911 operators don't know shit. animal uncontrol is absolutely correct, only call them AFTER the dirt nap. or have someone else call while you taking care of business.

yeah jewel, this one is especially disturbing. i found this photo of anti- shoplifting sign on the internet. i need to need to make for animal abusing scum.

sharon, i don't that it is legal in all 50 states to shoot dogs for simply worrying livestock but it is definitely legal in many.

packhorse, you are the inspiration for my next blog post.

The article says the horses and the dogs all lived on the same property. The police didn't know if they were all owned by the same person, but the pits and the pony all seemed to be owned by people in the same household (trailer). The pony was probably in sad shape beforehand, they said the other horse on the property is. Hopefully many, many more counts of cruelty will be added to this case.

I'm not very knowledgeable on horses, but the one in this picture looks like its been fed. The only thing wrong with it is the vicious mauling it took from the pit bulls.

As far as the 911 operator's demand to not shoot the pits, it's just poor advice that allowed the pit bulls to live and the pony to be slaughtered in the most gruesome way.

I agree with everyone here, should have shot first then called 911. In the same situation, I can't see police responding fast enough to save that pony. Also, the shooter is doing everyone a favor, even the pit bull owner.

i don't know much about horses either but i though it looked well fed. i have seen horses with severely neglected feet that would constitute abuse.

if this pony actually lived on the same property with the mutants, i would say that it appears he was tied up for the sole purpose of baiting. i really want this sick fucktard LACHAIN DEVER'S asshole to be ripped up in prison.

God bless the pit bulls for the peace and harmony they spread across the entire planet! http://www.liveleak.com/view?i=b14_1342036118

dude, you have the power to blog this!

Thanks Dawn, but I'm shy that way. I appreciate content review by the editor :-)

Without immediate human intervention, an equine being attacked by a pit bull will die. Horses that are able to run may survive.

Tie a pony to a post in the hot Texas sun and watch your pits kill it? There are a LOT of charges that need to be filed.

This pitter better watch his back around respectable horsemen,we don't like this kind of behavior...

dawn
after his asshole is destroyed , a neo-nazi pit-bull should rip him a new one.

right where his nose used to be ? i dont think thats too harsh .

This Nutter is now claiming that his disability prevented him from interceding in the mauling.

Ten Bucks says the pittie will be a "Balance Service Dog" by the end of week....

and jane berkey will hire a team of lawyers to present his case and ugly mutant's case.

find someone who claims to be down-trodden and they'le be stepping on someone elses neck , maybe a wife ,a kid or an animal.

You wonder how irresponsible pit bull owners are. Where did this fool get the idea banging on his fucking trailer would keep his pits from killing that pony?

Seems to be very common thing, when their pit bulls attack, the pit owner is afraid or unwilling to stop the attack. Seems to happen way too often.

Just another disgusting behavior of the pit bull owner. Cry responsibility but when it comes time, they do nothing.

I'm late here, but agree completely, shoot first to save loved ones, call 911 later. There's just not enough time in this situation. Besides, 911 operators are probably advised to caution everyone against shooting for legal reasons.