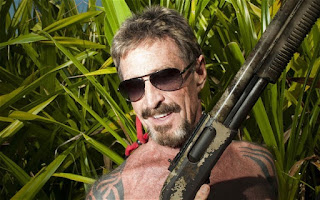 Computer software tycoon and hedonist John McAfee is a person of interest and wanted for questioning in the connection with the murder of his neighbor Gregory Faull. Faull was found shot to death in his home shortly after filing a complaint against McAfeee's noisy vicious dogs. McAfee shot and buried his dogs, claiming they had been poisoned and bolted to Guatemala with fiance Samantha.

lifestyles of the rich and self absorbed 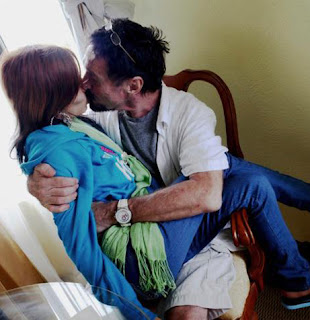 does anyone else wonder why a 67 year old millionaire,in good health, single most all of his life, surrounded by a harem of young girls, living in a mansion on the beach in the caribbean would all of a sudden fall totally head over heels, sprewing his undying love for her constantly in the press.... for a pitiful looking, uneducated, poor, local belzian girl???? SHE IS HIS ALIBI, watch him now as they are separated and he can no longer control her access to the press and the police..stay tuned

his alibi. excellent theory. you are probably correct.

....but but but! Pit owners are so gold-hearted and responsible!! This is a conspiracy, those dogs must actually be lab mixes and the girl is lying about her age n'stuff because pit owners are all about the TRUTH
/end snark

If responsibility and goodness are the trademark of most pit owners, and what they're doing is right... Why consistently retreat into the shadows, assassinate their vics character, and avoid culpability at all costs, even unto victim blaming and perjury?
This happens so often that it is more rule than exception, but whattaya wanna bet they crawl out of the woodwork chanting about this truth being false? That its an isolated incident...