Lifestyles of the Rich and Terrified: Part 1, "the Incident" 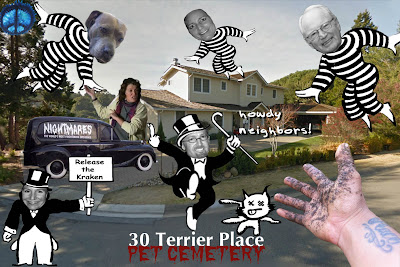 PART ONE, The Attack aka "The Incident"
On November 14, 2012 around 2:00 pm, in the quiet and upscale California bay area city of Hillsborough, the pit bull known as GRACIE that lives at 30 Terrier Place escaped through the front door when a visiting elderly relative had an oops moment and left the door ajar. GRACIE seized the opportunity and went on a rampage terrorizing her neighbors, jumping up and scratching at the windows, attempting to get to the occupants inside the home. By the time it was over, one cat was dead and the entire neighborhood was left shaken.

Hercules the cat was mauled while relaxing in the sun in his own yard. The owners of Hercules called the deadbeat pit nutter and animal control and they took their critically injured family member to the vet. Hercules' injuries were so severe that he had to be euthanized. His injuries included: crushed pelvis, pneumothorx, fractured mandible, fractured femur, no identifiable anatomy of the pelvis region (so crushed and dismembered, hard to identify anatomy), perineal area torn open, large gaping, deep wounds on backside, etc etc. Hercules was frozen and bagged for San Mateo county ACO ADAM BAGGETTA to pick up on the following day. Meanwhile BAGGETTA seized the frankenmauler and began the investigation that would ultimately end on November 28th with a Vicious Dog declaration. It was a simple case, a slam dunk really. GRACIE met criteria number 3 to be declared vicious. Any animal which inflicts severe injury on or kills a human being or another animal. With the savage unprovoked killing of Hercules on his own property and menacing neighbors just seconds before mauling the cat, previous escapes and a home invasion to her credit, GRACIE was headed for a dirt nap.

JORGENSEN was cooperative with AC, even helping load his frankenmauler into the van. The second the van was out of sight, JORGENSEN went to work contacting everyone that he could think of that had met GRACIE, no matter how superficially and asked them to write letters of support on their behalf. The very next day, JORGENSEN contacted the ACO and submitted letters attesting to GRACIE'S three unblemished, yet admittedly prey driven years culminating in her big moment with Hercules. In the letter, JORGENSEN described $5000 worth of security improvements that he made after GRACIE'S first big shot at freedom and promised to make his property more secure if GRACIE was given another chance. The support letters all followed a predictable pattern. I lost count of the times I read "loving", "gentle", "sweet", "friendly", "never aggressive before", "unfortunate accident" and "great with kids and dogs".  The last testament to her behavior is meaningless, given the fact that she mauled a CAT. GRACIE'S fan club described her as integral to the community who brightens everyone's day, and never aggressive even when left tied outside on the street. Word on the street is she has been nominated for the Nobel Peace Prize. There was no shortage of praise for JORGENSEN as a "loving" and "responsible" dog owner either. The same owner who leaves his prey driven pit bull TIED to a post on busy public sidewalks. KRISTIE MACHUCA went even further and promised to pack the hearing with her staff at Pasta Pomodoro if the authorities dared to take her away from her "loving" TomTom. But there was one letter written by DULCE REYES that screamed for my attention. "At times her owner would have to leave town and my fiance and I would watch her. While he was away Gracie seemed a bit off. As soon as Tom returned she would get so happy."  More on REYES' observations later. Also on the following day of "The Incident", ACO BAGGETTA put in a request for a necropsy, he checked the box RUSH. His stated objective? "TO DETERMINE CATS CAUSE OF DEATH TO BE INDICATIVE OF A DOG ATTACK." A necropsy request that Peninsula Humane Society/SPCA veterinary chief of staff DR LINDA JANOWITZ ignored. More on that act of insubordination later.

I find JORGENSEN'S letter very self-incriminating. Apparently he hadn't lawyered up yet.


Dear Mr. Baggettta,
I wanted to submit some letters from people who know GRACIE as kind of loving dog.  yadda yadda yadda.

I do feel terrible about my neighbor's cat. blah blah blah. I have owned GRACIE for just over 3 years without incident. I know GRACIE is prey driven, so I had taken steps to keep her securely in the house. ...GRACIE got out....blah blah blah... so I spent $5000 on retrofits. I put up a high sloping chain link... yadda yadda yadda.... it appears GRACIE likely got out due to my friend's grandfather propping open the front door. He knows the protocol in my house, but he seems to be getting senile. blah blah blah.

I do hope you will take into account my efforts to secure the yard. yadda yadda yadda...

All the best,
Tom Jorgensen

Prey driven? Five grand on fencing reinforcements to contain his kind loving dog? Blaming a senile old man? A fucking "protocol" for a kind loving dog with 3 years of obedience training that everyone loves and who loves everyone? WTF? This dog screams accident waiting to happen. The county SHOULD have taken into account his efforts to contain his loving prey driven mutant and denied his appeal based just on that! And if the hearing official had any integrity and half a brain, that's exactly what she would have done just based on his letter alone but read on.


Lifestyles of the Rich and Terrified: Part 1, "the Incident"

Lifestyles of the Rich and Terrified: Part 2, The Appeal

Lifestyles of the Rich and Terrified:Part 3, "The Professionals"

Lifestyles of the Rich and Terrified: Part 4, The Brief - Lies, Exaggerations, Illogical Conclusions, Inconsistencies and Speculations

I have come to the conclusion that pit bull owners just don't give a shit about anyone but themselves and their terror dog!

The pit bull owner's yard looks like a prison. His next step will be to put bars on all the windows so none can escape. We all know pit bulls have been known to jump through screens, windows, and even 2nd story balconies just to kill another animal. He will also need to put one of those double doors where one will not open unless the other is closed. Just like prison.

What is troubling is that this is is how a pit bull is supposed to behave. Escaping and attempting to tear apart other people's homes to get at the family pet to satisfy his drive.

I saw the news video. The animal behaviorist. What a douchebag. He thinks since it's human friendly (for now), that it's okay to put Gracie aka. mauling machine back to terrorize the neighborhood again. So he doesn't give a shit about anyone else's pet either. Just the stupid pit bull. They must both be pit nutters.

there are so many pit nutters in this mess, it will take 5 parts to tell the story, the abbreviated story. part 2 will be available in the morning. part 3 on tuesday, part 4 on wednesday and part 5 on thursday. what a scandalous mess.

Like the lady said all the fences in the world are no good if they leave the door open.

This is unbelievable. Somebody's got some splainin to do.
This vet sounds like she's hiding something.

I'm just going to guess that justice (for the cat) was not served, nutter has his mutant back, neighbors still terrified, thousands of pit advocates smugly satisfied. That's the way these things always go.

This vet probably went to vet med school on a Jane Berkey / BFF scholarship. Someone ought to file a complaint with the Vet Med Ethics Committee about her behavior -- violating the vet oath that was published here recently.

craven readers are way too smart.

i probably should identify the people in this photo. starting at 12:00: linda janowitz, david jorgensen, sterling chu, tom jorgensen, michelle bilodeau holding the sign, trish king looking like an idiot and gracipoo.