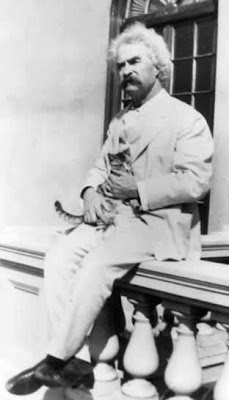 Mark Twain and cat
very early in my research of mark twain, i discovered this man had a deep love for cats. i immediately began to have doubts about the pit nutters inclusion of him on their famous list. of all of the famous people that i have researched so far that were erroneously included on the famous list, Mark Twain is by far the most amusing. Mark Twain didn't even care for dogs all that much. but don't take my word for it. read on and be sure to check the links.

also from Paine's biography:
At a place on Minna Street they lived with a private family. At first Clemens was delighted.

But next morning a dog began to howl. Gillis woke this time, to find his room-mate standing in the door that opened out into a back garden, holding a big revolver, his hand shaking with cold and excitement.

"Came here, Steve," he said. "Come here and kill him. I'm so chilled through I can't get a bead on him."

"Sam," said Steve, "don't shoot him. Just swear at him. You can easily kill him at that range with your profanity."

Steve Gillis declares that Mark Twain then let go such a scorching, singeing blast that the brute's owner sold him next day for a Mexican hairless dog.

even though Twain seemed to have a general dislike of dogs, he at least a good sense of dogs and genetics, unlike the pit nutters of today:
"My friend is not to blame for the sensitiveness of his nose, any more than you would flog a pointer for being keener on the scent than a stupid watch-dog."

further evidence that indicates he was not fond of dogs. Mark Twain made the following statement at a dinner commemorating Benjamin Franklin:
The carrier was then an object of interest to all the dogs in town. If I had saved up all the bites I ever received, I could keep M. Pasteur busy for a year. 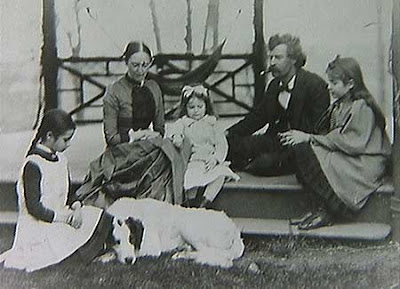 i do have a theory how Mark Twain ended up on the pit nutters' list. he references dog fighting and baiting in his fictional work. in The Celebrated Jumping Frog of Calaveras County, there is a character by the name of Jim Smiley who likes to bet on dog and cock fights. and then there is this excerpt from Huckleberry Finn
The hogs loafed and grunted around everywheres. You'd see a muddy sow and a litter of pigs come lazying along the street and whollop herself right down in the way, where folks had to walk around her, and she'd stretch out and shut her eyes and wave her ears whilst the pigs was milking her, and look as happy as if she was on salary. And pretty soon you'd hear a loafer sing out, "Hi! SO boy! sick him, Tige!" and away the sow would go, squealing most horrible, with a dog or two swinging to each ear, and three or four dozen more a-coming; and then you would see all the loafers get up and watch the thing out of sight, and laugh at the fun and look grateful for the noise. Then they'd settle back again till there was a dog fight. There couldn't anything wake them up all over, and make them happy all over, like a dog fight -- unless it might be putting turpentine on a stray dog and setting fire to him, or tying a tin pan to his tail and see him run himself to death.

SPECIAL THANKS TO CKING. without this individual's help, discrediting the pit nutters' claim that Mark Twain was a pit bull owner may not have been possible.
Posted by scurrilous amateur blogger at 5/16/2010

Wow you really need to get a life. seriously, talk about "pit nutters" you have got to be the biggest nut job on the surface of this planet, not mention your little cult followers. Idiots

As usual whenever you discover the truth and blow these f*****s outta the water, Craven. One by one they fall.

Another one bites the dust! Picking off the "famous" pit bull owners one by one. Good job, you too Cking!

It's funny how these pit nutters work overtime to defend their dogs. And defending their dogs, involves lying. But that's okay. When efforts are made to expose their lies, then we are nut jobs!

I'm not sure advocates LIKE dead people so much as they don't mind dead people. Like our dogs and horses and cats, it's just collateral damage to them. Take Louis P.Colby for example. NORMAL people would probably never own another dog after a fatality. But not pit nutters and their ilk, the deaths don't even phase them.

Im surprised these pit bull advocates still come to your blog. Guess they can't get enough of themselves.

Mark Twain really did have a Pit Bull, it says so right here, it even has a picture
http://www.precisesecurity.com

It's the 4th paragraph down

I can find no reference to Twain or the Pit Bull on the site provided by Anonymous.

I have found a photo of Twain with what appears to be a Pit Bull. It is on page 170 of the book *Mark Twain for Dog Lovers*, which volume should be in the hands of all lovers of the canine species. Alas for the Pit nutters, the dog was just one of several he encountered on a trip to Bermuda; and while Twain liked dogs much more than is generally believed, he would not have carried one with him by ship to Bermuda. Most of the dogs in the Twain household were actually the property of his daughter Jean, a true animal lover and activist for their welfare.