an open letter to wayne pacelle 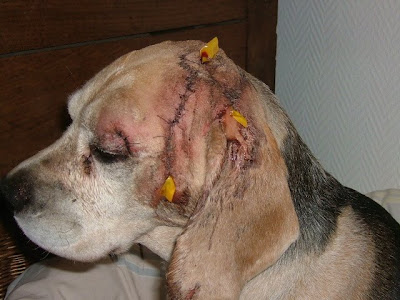 this sounds like a regurgitation of the disinformation created by jane berkey of animal farm foundation. so, have you adopted berkey's foolish pit bull philosophy? rumor has it that her "bloodhound propaganda" has also made its way into the HSUS. if true, i encourage you to rethink this flawed strategy and dump Berkey & Co. as fast as possible. as you are well aware, pit bulls are different and should be treated as such. only pit bulls require breaking sticks, only pit bulls maul cars, only pit bulls bust through windows and chew through chain link fences to fulfill their genetic destiny. the adoption of a "berkey policy" betrays this beagle and all of the victims that came before him and all of the victims yet to come. the adoption of such a policy even betrays your own conscience.
sincerely,
dawn james 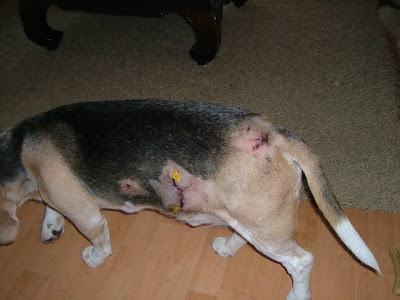 In the rush to defend and protect the pit bull interests, the HSUS and Mr. Pacelle forget that innocent and blameless animals suffer and die after maulings by pit bulls. Don't the lives and the pain of the beloved pet dogs, cats, horses, ponies count? The HSUS is ferocious in their efforts to protect farm livestock, but what about the horses, ponies, donkeys, goats, sheep, cattle, pigs, llama, alpaca, and farm raised deer that are mauled and killed by pit bulls? The HSUS forgets about the many, in their efforts to protect the well funded ...

You mean in their efforts to court the well funded. It's disgusting. I don't see how they sleep at night.

The HSUS has to know that their big voice is going to have immediate and disastrous consequences as innocent families are induced to adopt a pit bull and then suffer loss and horror when they treat it like adopting a lab knowing nothing of the necessary, isolation techniques, crating, proper breaking stick use, etc.

Great post about the bloodhound on 'the truth about pitbulls'!

CD - you know how I feel about Pacelle, and the HSUS.... Please keep up the good work!

I believe they are about a step away from PETA (if that). And they are extremely deceptive in their advertising. They would like us all to think that your $20 per month is actually going to help a dog or cat in a shelter- WRONG!! Check out their tax returns. They love the media and step in a throw their name around as necessary, and then leave the mess for someone else to clean up. They are nothing but lobbyists who want us all to become vegans. I'd like to see them prove me wrong. They even have VEGAN dog food - and that is just wrong on so many different levels.

And to get to the point - they are anti BSL, but will silently push it when they can get a politician in their pocket. No consistency at all in their actions.

Last 11 months worth of US Piticides:

Tracey Payne
46 years old/S. Macon GA
August 19, 2010
Pack of abandoned pit bulls as she cut through the property where the dogs had been kept.

Just wondering if you'd heard about this one:

yes i have but thanks, it will be in my next frankenmauler roundup, which is late.

Any organization claiming that pit bulls were not bred to fight should lose all credibility. It's interesting to ponder why they feel it necessary to lie.

because donations were down and they were tired of being beat up by the pit nutters. wayne pacelle sold out to the very wealthy jane berkey and her pit org AFF.