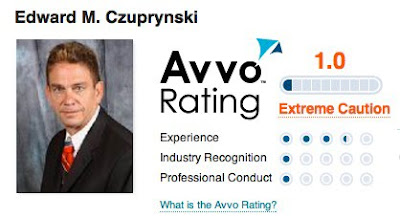 clusterfuck in bay city michigan remember convicted felon and pit nutter HARRY McDANIEL? he was walking his mutant at the moment that 8 yr old Cameron Everette was walking home, slipped and fell on the ice and triggered an attack by McDANIEL'S mutant? well, HARRY'S sad story has tugged on the bleeding heart strings of a local criminal defense attorney. EDWARD CZUPRYNSKI feels that the ex-con (drugs) has gotten a BADRAP. CZUPRYNSKI was so moved by HARRY'S plight that he took the case at a reduced fee. he wants to "make some justice happen for Harry", screw the boy and his injuries. CZUPRYNSKI was very quick to point out that even the victim's stepfather thought HARRY was a good man. CZUPRYNSKI said the reports of the dog's viciousness are HOOPLA.
CZUPRYNSKI'S very own HOOPLA
CZUPRYNSKI'S 1993 appeal for a 1992 drug conviction. it is a very interesting read. you will find out why the judge sentenced him to 14 months in a federal pen for such a small amount of pot. it seems that the judge considered CZUPRYNSKI'S 1974 drug conviction and his 1983 arrest and acquittal for drugs into the sentence.
i find it to be a rather interesting coincidence that he has 2 glowing reviews and both were done in the last 2 weeks.
avvo.com profile & rating

last august, CZUPRYNSKI threw his hat in the judicial ring. CZUPRYNSKI would like to advocate for the "downtrodden" like HARRY McDANIEL from the other side of the bench.
Posted by scurrilous amateur blogger at 1/17/2011

Now we have Lawyers specializing in Pit Bull Counter-Culture issues...Just like the one in Texas that participated in the phony PTSD Service dog disgrace!

Some of these perps need a good and proper Pit mauling...

I believe it is the No Kills or those connected to them that are getting these scammer lawyers involved.

Remember the Texas one involving the Metroplex Animal Coalition was scamming money from people for this.

I think they contacted the scammer lawyer and set this up as a money machine for themselves.

How do you tell the difference between a dead Pit-Shyster and a dead snake in the road?

The snake has skidmarks in front of it....

Mark Twain wrote:
“They're nothing but vicious blood-thirsty good for nothing animals. . . but enough about lawyers.”
--
http://www.mlive.com/news/bay-city/index.ssf/2011/01/from_the_comments_readers_resp.html

Another Pit Lawyer in Taunton Mass...Can't seem to find the victims to give them a check for the vet bills...."Yeah...That's the ticket!"