“Kids will be kids and the dog will be a dog, I reckon. ” 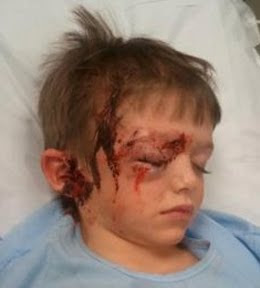 John Ellis Nixon
meriden, north carolina John Nixon and two of his friends went to 3587 Rollingview Lane to play with friends. the rest is according to the pit nutter DOUGLAS GLENN QUEEN, so the details of the events may contain only a kernel truth. according to QUEEN, when the kids arrived at his home, rather than go to the door, they went further into the yard (strange wording, isn't it?) to pet a 2 yr old pit/sharpei mix named SILO. QUEEN said the dog growled and the other kids heeded the growl but not John. and when he went to pet SILO, he was bitten on the face. surprisingly, SILO was current on his rabies vaccine and will serve his 10 day quarantine at animal services. AC also slapped a potentially dangerous dog declaration on SILO. QUEEN insists this has been "blown out of proportion" that SILO has been branded as dangerous by the media despite the fact that this is SILO'S second bite. last september, SILO was quarantined for NIPPING a family friend who provoked the nip by startling him from his sleep. of course, the "family friend" is not available to give their side of the story. QUEEN states that SILO is an indoor dog who is allowed to "run through the neighborhood". according to DEBORAH QUEEN'S myspace page, Sassie is the inside dog. and there are no photos of fighting dogs. 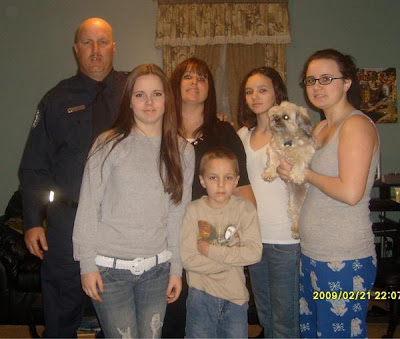 this guy is a lying fucktard, i reckon. 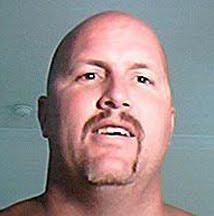 Wow, so they are handing out uniforms to the guy paid with tips to guard the pallet of cheese behind the local pizza hut, I reckon.

My children are forbidden to play at ANY home where there is a pit bull. The general feeling among most normal parents is, if the family has a pit bull, its a sign of bigger problems...from criminal activity to incredibly bad judgement. I have never met a nice family where the "family" dog was a pit bull. Usually the father is involved in something shady, or is an underemployed loser trying to boost his sense of manhood...or the wife is as dumb as a fucking crayon. Quite often, its both.

"dumb as a fucking crayon"...haha

They say you can't judge a book by its cover. Well, I do feel you can somewhat judge pit nutters by their cover. Look at the parents in the picture above. They both look like they were eating glue well into their tweens. I wouldn't judge a random photo or a mug shot as much, we've all seen usually nice looking celebrities looking like hell in one. But this is a photo they posed for and then posted, so I assumed it has their approval and is how they are.

Wow I had no idea how many inbred, uneducated and vulgar people were alive in society today! You say Pit Bulls are mutants and are crazed killers. Well did you know that in Italy Newfoundlands and Border Collies and considered “dangerous and evil breeds”? Well probably not since most of you are to busy taking meth to have even noticed. Also there are Pit Bull breeders that only breed the dogs that have the most desirable temperament traits. Do you want to know what those are? They are placidness and loyalty towards their owners, affection for children and gentleness towards other animals while still being protective of their owners and family. Does that sound vicious to you? I also have a little advice for you all and I hope you will take it; please learn how to spell if you’re going to rant a rave at least do it right. Oh and I almost forgot, I was chased by three vicious dogs in my lifetime but none of them were Pit Bulls or Pit Bull type dogs. I was almost bitten by a Jack Russell Terrier, I was charged by a Dalmatian and I was chased down the street by a 7 pound Chihuahua who was hell bent on biting me. Remember it’s the owner not the dog, after all how could a 150 pound teddy bear like a Newfoundland turn into a bloodthirsty killer?

Lycan Princess said: "I was almost bitten by a Jack Russell Terrier, I was charged by a Dalmatian and I was chased down the street by a 7 pound Chihuahua who was hell bent on biting me."

While your experiences may have been intimidating, they do not compare to the ordeal of 5 year old Makayla Woodard, who was mauled to death last month by loose pit bulls belonging to a neighbor.

The pit bulls also severely mauled the grandmother who was trying to save Makayla. I can not imagine the terror these people felt as those relentless, pitiless animals attacked. This is not an isolated incident, as pit bull maulings are occurring all too frequently.

But even if Makayla was the only victim, that's one victim too many, because that little girl was worth more than all the pit bulls that have ever lived, and nothing in this world can ever take away the loss this family has suffered.