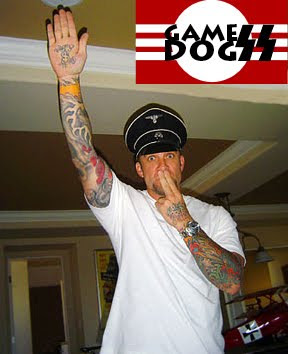 Pit bull owner, Hitler fancier, serial adulterer and owner of West Coast Choppers and Cisco's Burger has had his fair share of pit bull mishaps. First there was the yard accident where Cisco killed Rudy, then he accidentally allowed his shop pit, Cinnabon, to escape and go roaming on two occasions in 2010. No blood trails that we know of. For blood trails and drainage tubes, you need to fast forward to June 2011. Another one of James' pit bulls tore up a corgi in Austin, Texas.

After Sandra Bullock kicked James to the curb, he went on Nightline and he blamed his father for his own infidelity and he blamed the divorce on Bullock's desire to adopt a child not on his cheating. James' step mother, Janina James Coan said Jesse was obsessed with Hilter as a teenager and he killed baby rats by injecting them with alcohol stating, "That's what Dr Mengele would do." When confronted, James stated that he is not a racist and the above photo was a joke.

Money does not buy class, a leopard can't change his spots. Even with money, a nutter is still just a nutter.

Another report of an attack by this nutter's pits. This creep just does not learn.

Hahaha, I knew Sandra Bullock was great at playing dummies, now I have to smile when I find out that's also who she is in real life.

Gods, what a loser (both of them).