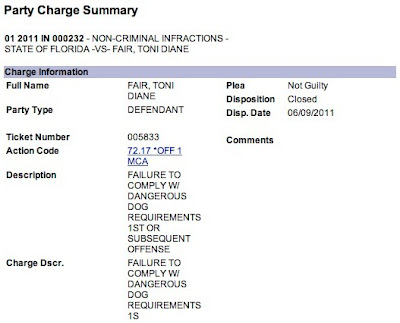 By now everyone has heard about the gruesome mauling of Roy McSweeney in Hawthorne, FL. If you haven't, click here and here. This nightmare has sparked interest in Florida animal control laws among my people.
A link to a 2006 article from The Gainesville Sun landed in my email inbox. After a series of horrific dog attacks, the Alachua county commissioners decided it was time to ban dangerous dogs. Twelve citizens spoke at the public meeting, only two were opposed to the non-breed specific banning of dangerous dogs. And only one of those people was named in the article - TONI DIANE FAIR.

Two of the 12 speakers from the audience expressed concerns over the ordinance. Toni Fair, owner of a dangerous dog named Elvis, said that with the assistance of Animal Services she has learned how to properly confine the dog and that no further trouble has occurred.

I am always curious about the people who fight against common sense laws, so I consulted The Google. Not only did I find a 2003 DUI conviction, I found that in April 2011 TONI FAIR was cited for FAILURE TO COMPLY W/ DANGEROUS DOG REQUIREMENTS. Well, so much for her one on one training on proper confinement. On June 9, 2011, the day before Roy McSweeney's horrific mauling, TONI DIANE FAIR pled non-guilty. She was fined $71. FAIR paid $50 and the remaining balance of $21.00 was dismissed. 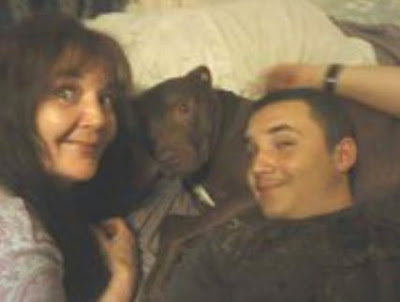 They're creepy and they're kooky,
Mysterious and spooky,
They're all together ooky,
The Addams Family.

Their house is a museum
Where people come to see 'em
They really are a scream
The Addams Family.

So get a witches shawl on
A broomstick you can crawl on
We're gonna pay a call on
The Addams Family.

I'm curious as to wether or not the county commissioners ever did a background check on the nutters they knew were attending the meeting?

If I found this kind of information about someone who's trying to sell me on the kindness of pit bulls then I wouldn't take their word for it.

Roy McSweeney died today and here are the ugly dogs that killed him.